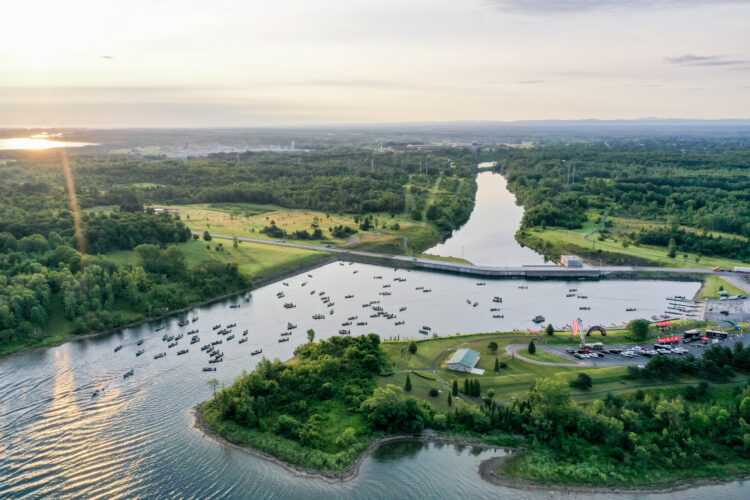 MASSENA, N.Y. – The Major League Fishing (MLF) Toyota Series Presented by A.R.E. Northern Division will continue its 2021 season with a tournament starting tomorrow in Massena, New York, Aug. 26-28, with the Toyota Series Presented by A.R.E. at the St. Lawrence River. Hosted by the Town of Massena, the three-day tournament will feature the region’s best bass-fishing pros and co-anglers casting for a top prize of up to $65,000, plus an additional $35,000 bonus if the winner is a qualified Phoenix Boat owner.

The event will mark the third major event that MLF has organized out of Massena since June, with the MLF Bass Pro Tour being showcased in late June, the MLF Tackle Warehouse Pro Circuit in late July, and now the MLF Toyota Series this week. The Toyota Series is considered MLF’s “Triple-A level” and features numerous aspiring pros trying to qualify and advance to the Pro Circuit, along with many of the best local anglers from the region.

Like the previous two events, anglers and fans should expect to see a lot of giant smallmouth bass in this tournament. Anglers will be targeting them both shallow and deep, looking for river breaks, current seams,  shallow flats and deep humps. Expect to see plenty of tubes, drop-shot rigs, jerkbaits, Ned rigs and hair jigs in play this weekend. The winning angler will likely need to average about 20 to 22 pounds a day (five-fish) and the expected three-day winning total will likely be right around 60 pounds.

Anglers will take off daily at 6:30 a.m. ET from the Massena Intake Boat Launch, located at 1415 State Highway 131 in Massena. Weigh-ins will also be held at the boat launch and will begin at 2:30 p.m. Fans are welcome to attend the event or follow the action online through the “MLF Live” weigh-in broadcasts and daily coverage at MajorLeagueFishing.com.

The 2021 Toyota Series presented by A.R.E. consists of six divisions – Central, Northern, Plains, Southern, Southwestern and Western – each holding three regular-season events, along with the International division. Anglers who fish all three qualifiers in any of the eight divisions and finish in the top 25 will qualify for the no-entry-fee Toyota Series presented by A.R.E. Championship for a shot at winning $235,000 cash, including a $35,000 Phoenix MLF BIG5 Bonus for qualified anglers. The winning co-angler at the championship earns a new Phoenix 518 Pro bass boat with a 115-horsepower Mercury outboard. The 2021 Toyota Series Championship presented by A.R.E. will be held Oct. 28-30 on Pickwick Lake in Counce, Tennessee, and is hosted by the Hardin County Convention and Visitors Bureau.