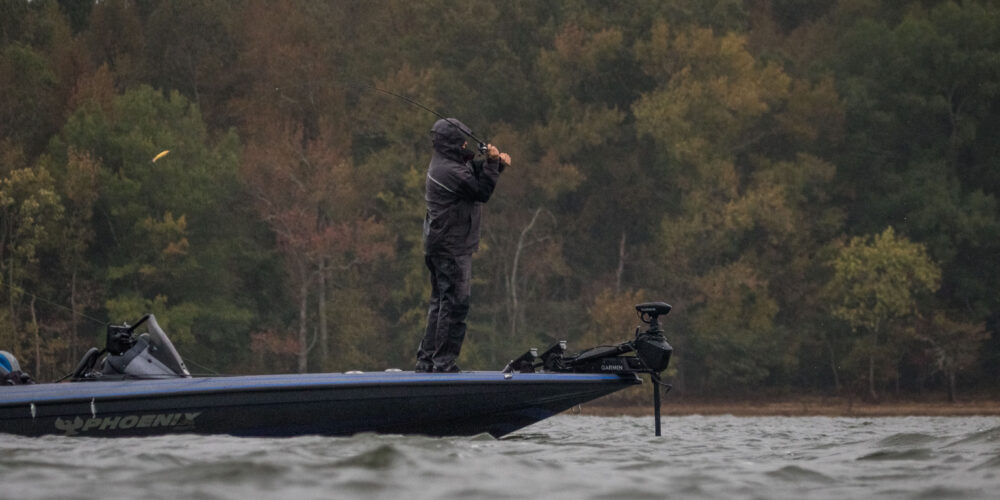 COUNCE, Tenn. – From a weather standpoint, the final day of action for the Toyota Series Championship Presented by Guaranteed Rate on Pickwick Lake has been a clone of the previous days. Light rain and wind greeted the Top 10 to start the day and it hasn’t let up much as the day has worn on.

Starting the day with the lead, Mikey Keyso ran back to his ¼-mile stretch of matted grass above the Natchez Trace Bridge. He’s been punching and frogging all week, but with the frog doing most of the damage yesterday the Florida pro has had it locked in his hand throughout much of the morning. Fishing super slowly and methodically, Keyso had put four keepers in the boat that weigh around 8 pounds before we left him around noon. He hasn’t gotten many bites each day, so the day has been about on track, and yesterday he got his best bites later in the day, so it’s not over yet for him.

For the majority of the rest of the top pros it has been a brutally tough morning. Todd Castledine, Jeff Reynolds, Aaron Johnson and Chris Digino have all been fishing grass with crankbaits, spinnerbaits and vibrating jigs with solid success on the upper stretch of the lake. Our on-the-water crew spent some time with each of them this morning, but only Johnson was close to a limit with four fish weighing about 9 pounds. Castledine was able to put one in the boat, though it was a 3-pounder.

From there, our crew checked on Barry Graves, Greg Bohannan, Cody Nichols and Dakota Ebre. Bohannan had a few keepers, which included a 5-pounder, so the Arkansas pro has good kicker already secured. Nichols was the only other pro from the bunch that reported a keeper, but he’s not having much luck in his main area thanks to plenty of local traffic in the area.

The major storyline of the day is Brent Crow. Crow, a local guide on Pickwick, barely snuck into the Top 10 thanks to winning a tiebreaker with Randy Blaukat by having the heaviest single-day bag between days 1 and 2. With just shy of 4 pounds separating Crow from Keyso, Crow knew the only way he’d have a shot to win would be to run up to the Wilson Dam tailrace – an area that didn’t fire during the first two days of the tournament. When he set his Pheonix down in the swift current just downstream from Jackson Island, he knew it would be a special day.

Crow’s co-angler, Ray De Jong, got the ball rolling with the first smallmouth of the day, but from there it was all Crow. Working a wakebait in the current, Crow was catching smallmouth, or at least hooking and losing them, nearly every cast for almost 45 minutes. By 9 a.m., Crow had a limit pushing 20 pounds in the livewell and was feeling good. So good, in fact, that he started fishing his way back towards Pickwick Landing State Park with hopes of getting his co-angler on some good fish along the way.