Western Anglers Take on the California Delta to Finish the Season 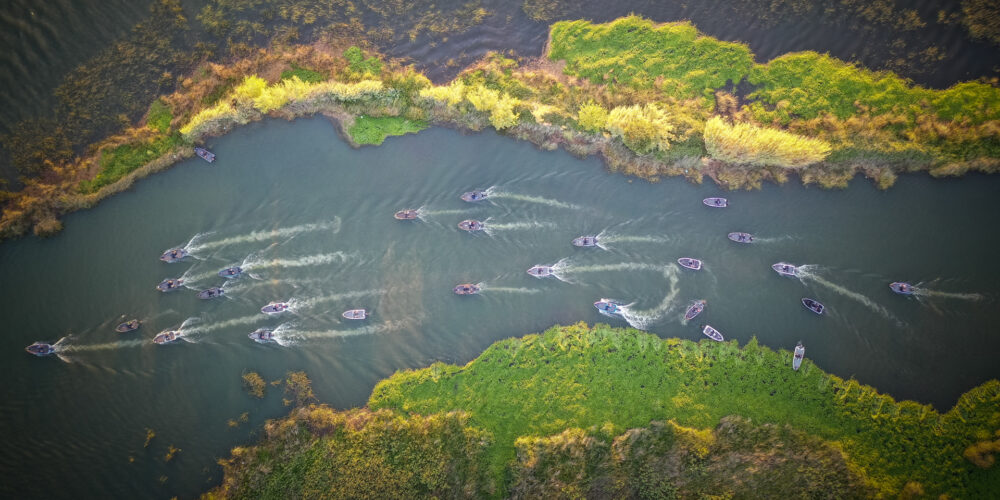 BETHEL ISLAND, Calif. – Sprawling, challenging, famously fickle and infinitely rewarding—the California Delta stretches east from the Bay Area like a tantalizing lure for bass anglers. Tournament images are striking here, on a playing field where cargo ships and sea lions contrast with boat wraps, ball caps and tules. Catch it at the right moment and the Delta can reward you like few places on the planet. Fail to figure out its puzzle and you could be counting zeros on the weigh-in stage.

This week, anglers from the Toyota Series Presented by A.R.E. will square off in the Western Division’s regular-season finale. On the line, berths in the Toyota Series Championship, an Angler of the Year title and plenty of cash.

Concord, California, angler Blake Dyer is no stranger to the Delta. Dyer has posted three Top 10 finishes in the Western Division – including a 2019 win – in the past three seasons on the dynamic waterway just 30 minutes from his home. This week, Dyer predicts larger than expected weights as expert anglers attempt to shake area bass from a postspawn funk.

“Generally, this is a good time to fish the Delta,” Dyer said. “If you look at the weights from a tournament this past Saturday, it took 25 pounds to win. There were numerous bags over 18 and 19 pounds. Locals I talked to thought 15 or 16 pounds might be a good day. So, guys are definitely getting bites, and there are definitely big bites to be had.”

Dyer said he has scouted all over the fishery in the run-up to this week’s event, investigating potential target areas from east to west. The key to success, he believes, will be hitting the right spots at the right time. In this tidal fishery, even fish found in practice aren’t guaranteed to be in the same places again.

“Putting yourself in the right areas at the right tide is going to be key,” Dyer said. “We have been catching a lot of little fish doing certain things, but when you are fishing to try to get that bigger bite, that’s what you have to do to get a kicker this time of year.”

Expect experience to play a role in this week’s event. Anglers from Arizona, Colorado, Utah and even as far away as Illinois are in the field; however, the Delta’s tidal ecosystem can lend an edge to local sticks. Though Southern California hammer Kyle Grover comes into the event leading the Western Division Angler of the Year race, he says local anglers have a greater advantage on the Delta than anywhere else on the circuit.

“I think the guys that live here, it helps a lot,” Grover said. “Someone like me who only comes up once or twice a year has to learn all over again. There’s no tide at home. I think on Day 1 we have a 4-foot tidal swing. There are multiple kinds of grass from tules to hyacinth that aren’t really anywhere else, and the place is massive.”

Grover expects big bags to be the theme of the first day as winds that have been harassing anglers during practice subside. Those bags, he believes, will be a critical advantage going into the end of the week when the winds are forecast to return.

“I think you’ll see a 25-pound bag take the lead for sure,” Grover said. “But you could see multiple bags over 20 pounds, but I think the weights will begin to drop towards the end of the week.”

Leading Angler of the Year on the pro side, Grover could take home his second Western Division AOY title with a good showing this week. Still, he’s less than a handful of points ahead of Patrick Touey, with red-hot Justin Kerr in close succession along with former AOY David Valdivia in the running as well.

On the Strike King co-angler side, Zack Eggleston has a 1-point lead over Blaine Christiansen, and Jonathan Green is just 4 points back. So, you can expect weigh-in to be tense on the co-angler side of things as well.