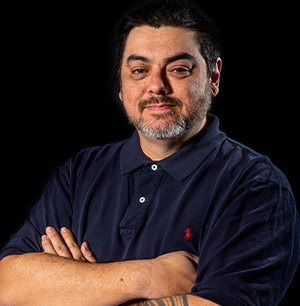 Michael is an Okie (BOOMER SOONER) who has had the opportunity to travel around as a graphic designer. His work has helped win a National Murrow Award, several OAB awards, and several regional Emmys. Michael sees the world in RGB and CMYK and can name a lot of the fonts you see on signs. He loves music and describes his taste as “eclectic” but his heart is metal. You may have seen him putting around on his big fat Harley trying to look like Way Cool Jr., with a burger stain from lunch on his shirt and a grin.

As a Motion Graphic Designer at Major League Fishing, Michael operates all kinds of cool computer programs to make graphic elements spin, flip, slide, and fly on your screen. He enjoys doing his job and laughing with his coworkers.