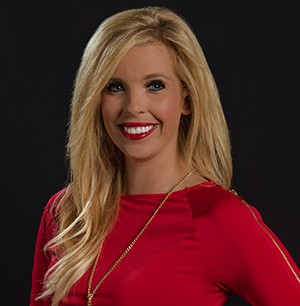 Aly is the feature reporter for MajorLeagueFishing.com and the MLF NOW! live stream. Aly gives MLF fans “Inside Access” to their favorite MLF pros.

Aly graduated from Oklahoma State University in 2013 with a degree in Marketing. While at OSU, she was a member of Kappa Alpha Theta, was the Feature Twirler for the Cowboy Marching Band, and was named Miss OSU.

Aly competed for Miss Oklahoma and was honored to receive the Miss America Community Service Award. She turned her Miss Oklahoma platform P.A.S.T.- Prevent and Stop Tormenting, into a non-profit organization and has been able to speak to over 150,000 people about the dangers of bullying. Aly has also been twirling and performing since she was 3 years old and has 27 National and World baton twirling titles.

Before coming to work for MLF, Aly was working for a lobbyist at the Oklahoma State Capitol and preparing for law school. Aly decided to trade legislative bills for rods and reels and has been with Major League Fishing since 2015.

As a 6th generation Oklahoman, Aly loves and appreciates the outdoors and enjoys spending time riding four wheelers, shooting guns, and fishing on her family’s farm.