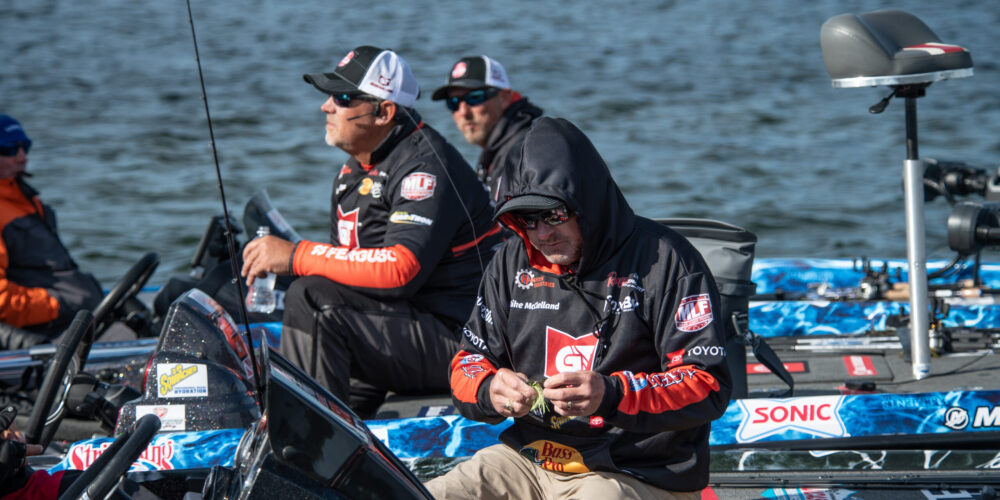 The team of Wesley Strader, Mike McClelland and Scott Suggs continued to pummel the competition on Day 2, securing a victory and a spot in the Team Series Championship with a total of 369-13, 100-13 over Builders FirstSource.

Even with a big cushion to start the day, Strader, McClelland and Suggs still felt uneasy; until they learned they would be fishing Lake Ida for the second day in a row. All three contributed, with Suggs again posting the day’s best total, 34 bass for 67-11.

“When they took us to Ida in the morning, we were more than shocked to be there again,” Suggs admitted. “We decided to do the same thing as we did on the first day, with each of us sticking to our strengths. We all knew what to look for and started on our strongest areas from the first day and then searched for similar water.”

Suggs went to the grass lines with a Strike King Thunder Cricket, McClelland went to his smallmouth around docks, and Strader saw diving birds and made a beeline to the action.

“Wesley got off to a very fast start and said, ‘I need some help with these fish,’ and I went over there,” Suggs said. “I only caught one before the bite died, but Wesley catching them early was a big confidence-builder for us.”

While Suggs again turned in the best total, it was primarily with smallmouth on the second day, where largemouth accounted for most of his first-day weight.

“It was the same bait, but I was catching big smallmouth up shallow,” he said. “There was some short grass, and where it mixed with sandy bottom was the key. The average size of those smallmouth was much bigger than the largemouth I had been catching, and helped build my weight.”

Familiarity and friendship pay off for Team Knighten Industries

Although Team Knighten Industries made it look easy as they cruised to the win, there is a backstory to the team. Suggs credits the deep friendships and trust built over the years of competing against Strader and McClelland, along with a unique practice strategy for the victory.

“We are all very tight and have known each other for years,” Suggs said. “We work incredibly well together, and I couldn’t ask for a better team. We trust each other completely.”

After the Bass Pro Tour season concluded on Mille Lacs, Team Knighten Industries went fishing every day for a week, working together as if they were fishing the General Tire Team Series.

“We fished a bunch of different lakes, sometimes two or three in a day,” Suggs said. “We’d call each other to check in every few hours to give our reports and help break down the lake. That was a big confidence-booster for all of us.”

The first day of Group C competition at the Lucas Oil Qualifier of the General Tire Team Series can be seen Saturday, Jan. 28 from 2-4 p.m. ET on Outdoor Channel.