How Stefan Dials in with Swim Jigs 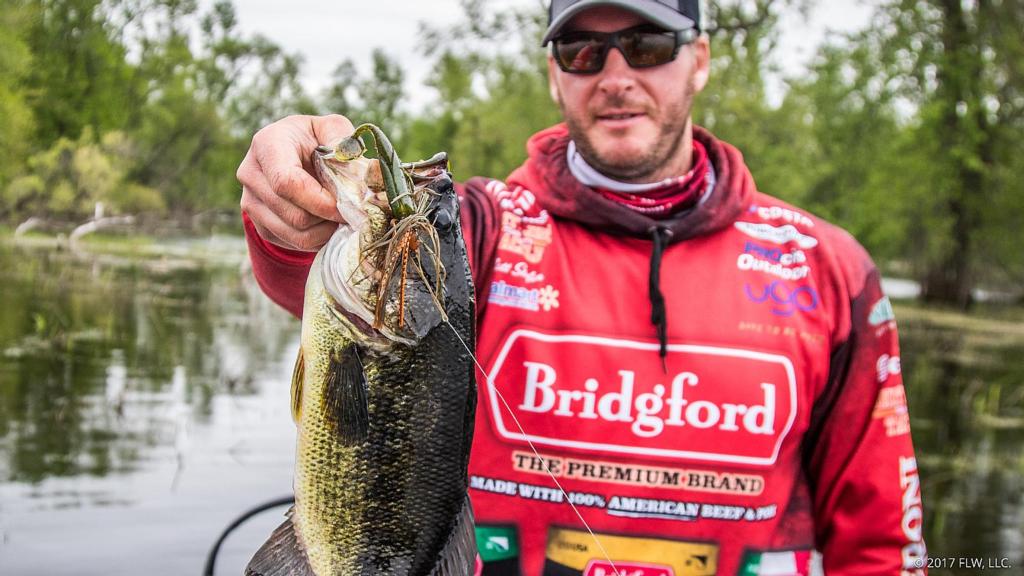 Folks in Wisconsin seem to have an affinity for swim jigs. While Tom Monsoor is pretty much the world authority on the method, that doesn’t mean there aren’t other ways to do it. Matt Stefan has made the Forrest Wood Cup three of the last four years, and each year he’s put at least a few in the boat on a swim jig no matter where the season has taken him.

“The swim jig would definitely be my go-to bait if I could choose one bait,” says Stefan. “That’s because it’s such a versatile bait that you can really use it through any level of the water column. You can use it in a foot of water through thick grass. You can use a heavy swim jig on ledges. You can fish suspended fish with it around docks and over deep water. It’s really a bait you can utilize at all different levels of the water column and through all different types of cover.”

Through his love of the bait Stefan has formed several opinions about it, from what makes a good swim jig to the best times to put one into action. 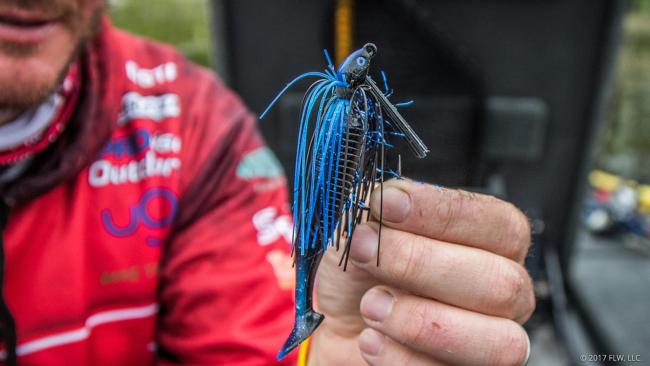 Before signing on with Dirty Jigs, Stefan made most of his own swim jigs, and would probably still do so if he weren’t satisfied with what is commercially available.

For the actual jig, the meticulous pro likes a bullet-shaped head and a vertical line tie – one that is in line with the hook. He believes that combination produces the most weedless jig possible. Stefan also likes to thin out the brush guard, sometimes taking out as many as one-third of the strands. He often thins the skirt as well, both shortening and removing some of the strands. Finally, Stefan prefers a jig with a good trailer keeper, be it a nice molded-in barb or a wire keeper. Though he sometimes uses Super Glue to lock trailers in place, he doesn’t like the buildup that can occur overtime.

“The majority of the time I’m throwing a 3/8-ounce jig,” Stefan says. “If I’m in super shallow water I’ll switch to a 1/4-ounce, and up north here we have a lot of deep weedlines, and I’ll switch to a 3/4-ounce in that respect. That can really be a killer in the summer when fish are grouped up in like 14 feet of water.”

Stefan throws the Dirty Jigs Swim Jig or the Finesse Swim Jig 95 percent of the time, relying mostly on the standard model. He also occasionally uses the No-Jack Swim Jig.

“I utilize the finesse one when I’m fishing smallmouths, which is usually in rivers,” says Stefan. “I do that because the hook is substantially smaller on it. It’s still extremely stout. You don’t have to worry about bending it on a fish, but they get it in their mouths better. The smallmouths have a bad habit of just coming up and grabbing the tail, and I think that a bigger hook has prevented some fish in my past from getting the bait.

“For the most part I don’t feel like I need to throw the No-Jack too much, but if I’m down in Florida and using braid I will switch over. It’s such a stout hook that you need something to drive the hook home, and you’ll be using it in cover that’s so thick that you need braid anyway.”

Stefan usually opts for 15-pound-test Seaguar InvizX line and sometimes drops down to 10-pound test in wicked-clear water. He sticks with a high-speed reel and usually uses a custom-built rod made on a St. Croix Legend Tournament finesse swim jig rod blank. The blank is a 7-foot, 1-inch, medium-heavy power with an extra-fast action – heavy enough to manage around cover but light-duty enough to present and work some fairly small baits. 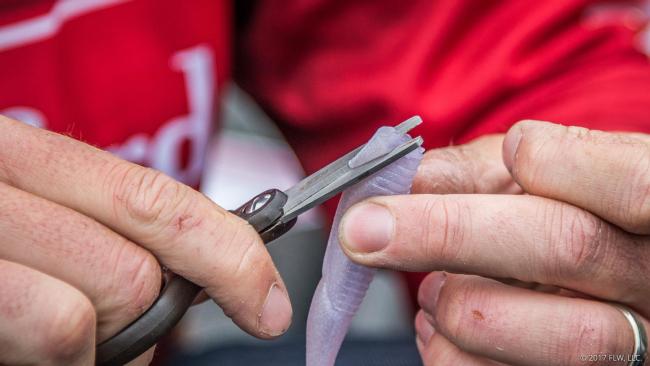 For his trailers, Stefan prefers a swimbait.

“I’m a big fan of boot tails,” he says. “I feel like the bait wobbles side to side, and it allows the bait to have more action.”

Most of the time his swimbait of choice is a Reaction Innovations Skinny Dipper, and he starts the process by cutting the head off. Then, he trims up from the bottom to make the bait a little more streamlined before rigging it on he jig. When finished, the process creates a really nice package that will come through grass very easily. 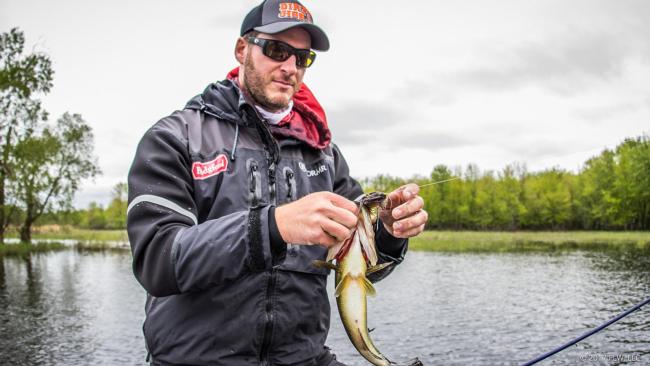 Chucking and winding a swim jig through shallow vegetation is probably the most common way to fish one. It’s also one of the simplest techniques because once you have a good swim jig combo you’re basically set to start winding it back through the grass.

Two ways that Stefan likes to make use of the swim jig’s versatility are in shallow river situations and on deep weed edges. Both require a bit more refined technique.

One of Stefan’s favorite times to fish a swim jig is when he’s keying up shallow in rivers such as the Mississippi and the Wolf in Wisconsin and Minnesota.

“I love it for fishing cut banks and current-type conditions where I’ve got some wood up against the bank and a little bit of depth,” he says. “I’ll throw it up to the cut bank or the log and let it drop to the bottom and then slowly start retrieving back. It’s a killer for smallmouths or largemouths.”

Stefan says the key to finding cut banks is using your eyes and looking at places that have or had current flowing by.

“It doesn’t have to be main river; there just needs to be current at some point in the year,” says Stefan. “In the spring there may be a lot of current that shoots through a backwater, but in the summer there may not be. The biggest thing is you want to find those undercut banks. A lot of it is visual. You’ll go down the bank and see sand, and then there will be a 10-foot stretch where you see black water. It may only be a foot deep, but they will get under that little bank.”

The season and target species determine whether he focuses time in the main river or the backwaters.

“The main-river stuff is usually better for a mixed bag, and the stuff in the backwater is usually more of a largemouth deal,” Stefan says. “If it is mid- to late summer when largemouths are usually winning in the Midwest I’ll fish the backwaters. If it’s the fall of the year or the spring I’ll usually fish the main river.”

Stefan mostly targets cut banks that are 2 to 3 feet deep and likes the 3/8-ounce Finesse Swim Jig because he wants to be prepared for smallmouths, and he wants the bait to fall fairly quickly and not be swept away like a ¼-ounce bait would. He likes chartreuse and white for smallmouths or a mixed bag and black and blue or green pumpkin when he’s more dialed in on green fish.

“If they bite it on the fall, that’s like if you are throwing any pitching jig,” says Stefan. “But especially when you have smallmouths, quite often you’ll get bit on the way back, and the swim jig allows me to get those bites in between the fall and the boat.”

Regardless of where they bite, Stefan likes to put the bait right up on the bank, with about 90 percent of his casts being some kind of underhand pitch or skip.

Another of Stefan’s more Northern techniques is tossing a swim jig on deeper weed edges in the summertime. It’s a great way to go for numbers and size, and makes for a good excuse to get some 3/4-ounce swim jigs.

Though a swim jig is a good tool to cover water, finding the right types of places is key.

“Up north it’s all natural lakes with deeper water,” says Stefan. “So, main-lake points and submerged islands are probably the two areas I would start on, rather than being back in a spawning bay. I want deep water, and I’m usually looking for more defined breaklines.”

Once he has a rough starting spot, Stefan typically concentrates on irregularities in the weeds.

“If you have a straight weedline for a while and you have a nice defined point or a stretch where some sparse weeds taper out deeper or even an indentation, that’s good. Probably my favorite is where I can find some rock mixed in or a harder bottom.”

Stefan also likes to fish the ends of weedlines, where a sharper edge begins to flatten out into a weed flat. He imagines it like fishing underwater bluff ends, and says that those transition areas can be particularly good.

For the bait, Stefan uses the standard Dirty Jigs Swim Jig in a 3/4-ounce model with a fair number of strands plucked from the skirt and almost always throws black and blue, green pumpkin or a combination of the two. Most weedlines up north finish off in 8 to 14 feet of water, and it takes a pretty heavy jig to stay down where Stefan wants it.

“It’s a slow-roll, parallel to the grass or in an indentation,” says Stefan of the presentation. “You want that bait to be close to the bottom. You don’t want to be ticking off of the tops of the weeds; you want to be down by the base of it. You throw it out and slowly retrieve it and then rip it free when you hit something. You just have to keep that bait as close to the bottom as possible.”

It may not be the most common way to fish a swim jig, but it works, and it’s a good statement about the versatility of the lure. Depending on how you set it up, a swim jig can be used for almost any situation. If you aren’t swimming a jig, you’re missing out on fish somewhere for sure.