How to Choose the Right ChatterBait 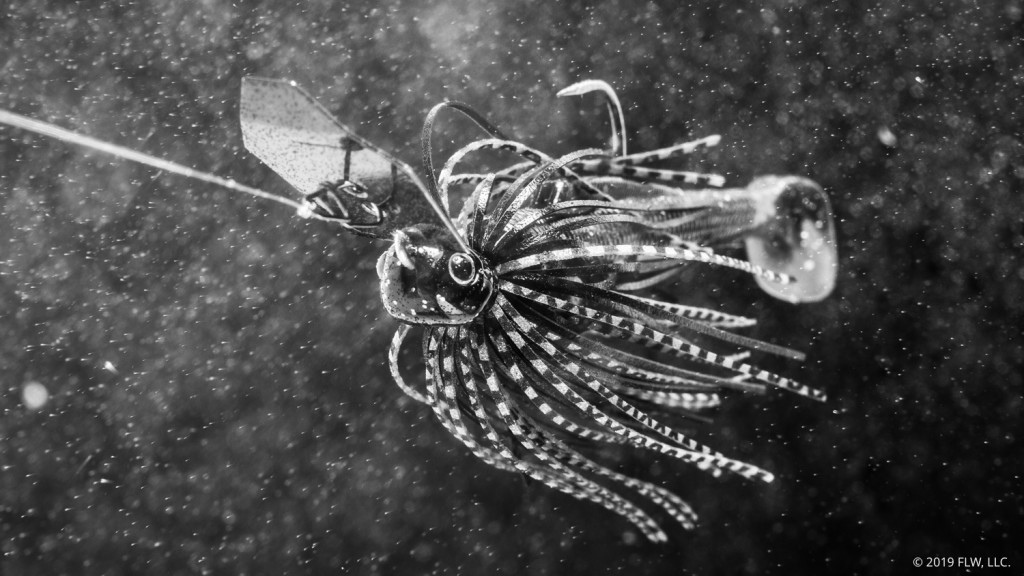 When Z-Man and Evergreen partnered together to create the ChatterBait Jack Hammer, it appeared to many people that the world finally had the ultimate do-everything bladed jig.

If you were going to carry just one bladed jig, the Jack Hammer would be a great choice. But to say it’s the perfect ChatterBait for every scenario would be like saying ketchup is the perfect condiment for every food, or fluorocarbon is the only line you should use. Sometimes you need to opt for something just a little different to tackle a niche situation. As far as ChatterBaits go, there are a number of good options.

FLW Tour pro Miles Burghoff, who’s on the Z-Man pro-staff, has spent a lot of time dialing in the various members of the ChatterBait family. Here’s how he puts his favorites to work. 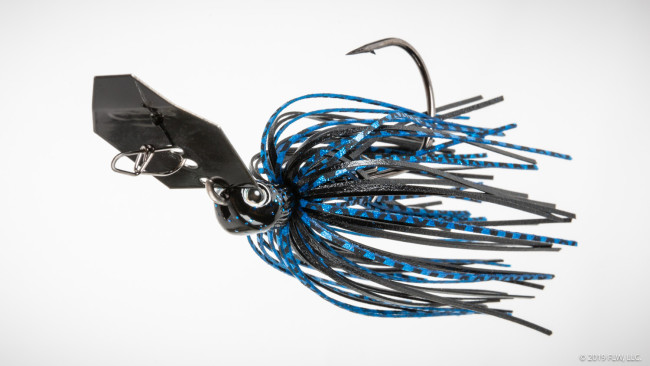 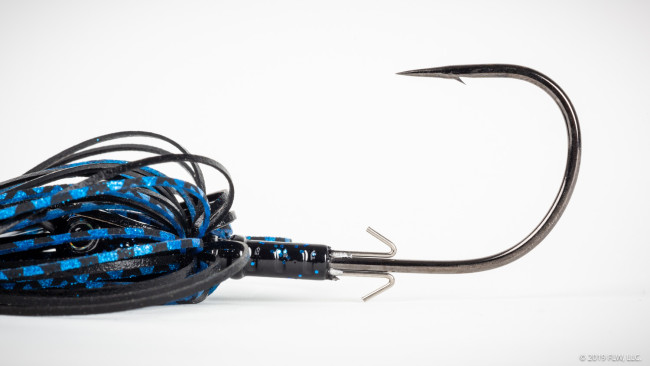 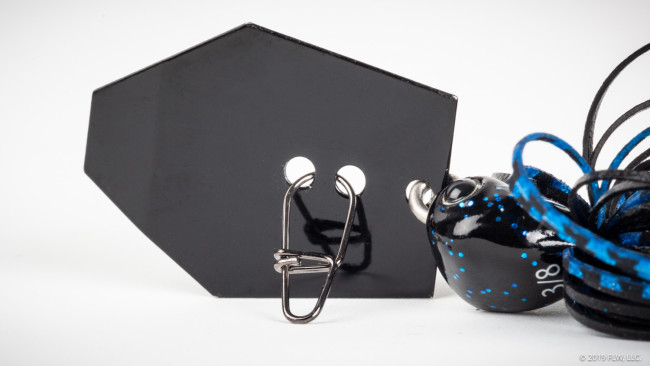 The ChatterBait Jack Hammer does (almost) everything

The Jack Hammer is the best all-purpose ChatterBait in the line. It has premium components that most high-level tournament anglers prefer, including a high-quality Gamakatsu hook, wire bait keeper and strong line clip. Plus, it comes in sizes ranging from 3/8 to 1 1/4 ounce, so it can be fished in a lot of situations.

“If I need to just bring one box of ChatterBaits for practice or the tournament, it’s going to be the Jack Hammer,” Burghoff says. “It goes through the grass really well, has a great hook on it and it has a great, proven action.”

Burghoff says he’s not sure exactly what makes the Jack Hammer’s action so effective. It could be that some of his Jack Hammers hunt a little bit, but regardless of specifics, he’s sure there’s something “special” about the action. He’ll use it in open water, around grass or docks, and with a multitude of retrieves (yo-yoing, straight, hopping, ripping). 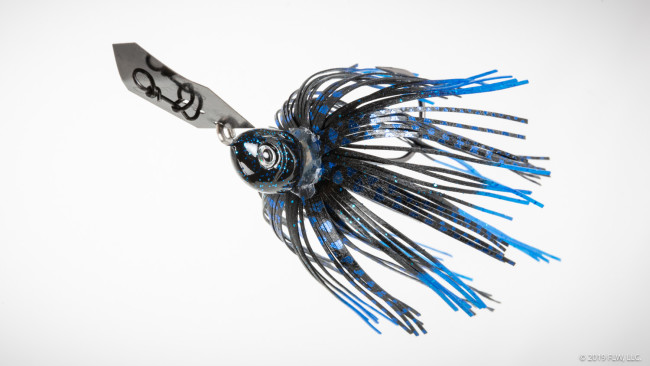 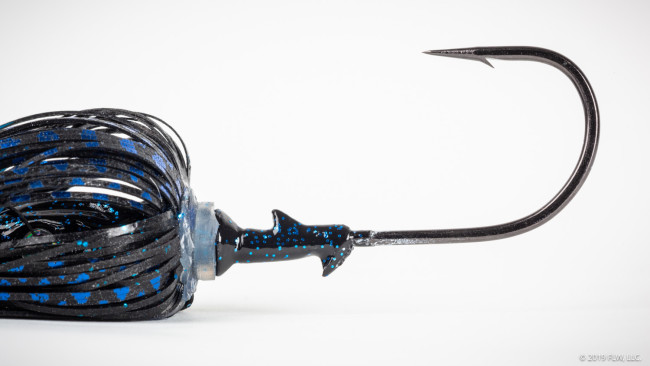 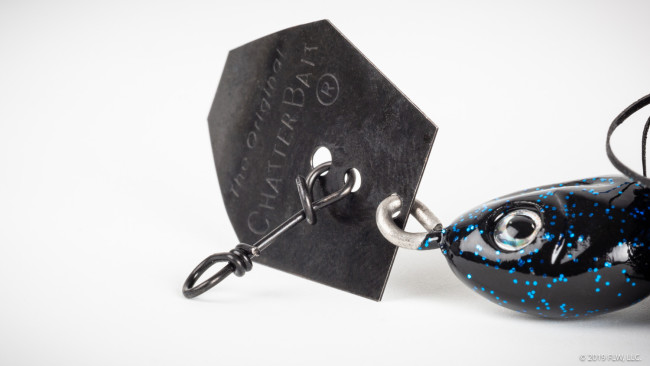 The Project Z has a quality hook with two lead barb keepers and a heavy-duty wire line tie that’s a plus in heavy grass. Burghoff says the bait doesn’t hunt when retrieved.

Shallow is where the Project Z excels in general. According to Burghoff, it experiences more “lift” during the retrieve than other ChatterBaits, so it can easily be kept near the surface to skate through skinny water or over grass that’s nearly topped out.

“If I’m fishing shallow in a tidal fishery or natural lake, or it’s 2 feet or less, that is definitely the bait I go to,” adds Burghoff. “Even if I want to slow-roll it, it wants to pull to the surface. It doesn’t dig into shallow cover. Even with the 1/2-ounce version, I can fish 2 feet of depth and not get all bogged down in the muck.” 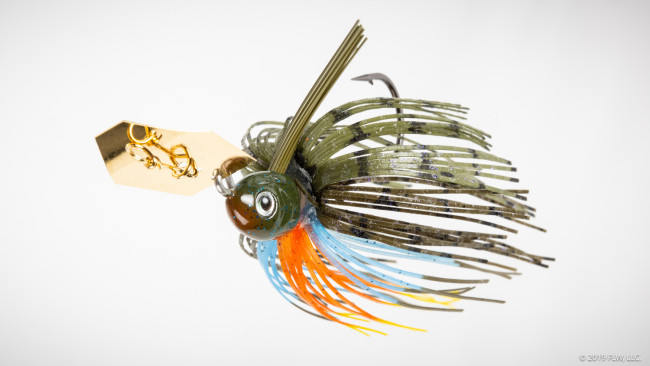 Like the regular Project Z, the Weedless variation is great for fishing in skinny water or over grass that’s nearly topped out. The difference is it has a fiber weedguard (Burghoff likes to trim it about even with the hook point), so it can come through cover where open-hook models would snag.

“It’s just as good in weeds as it would be around wood, but obviously having the weedguard makes it much more suitable for fishing around hard cover,” explains Burghoff. “It doesn’t necessarily have to be wood, either. One of the biggest weaknesses for ChatterBaits is fishing around reeds or pad stems. Any time I’m faced with a situation where I have hard-stemmed vegetation, that’s the ChatterBait I reach for.”

Burghoff doesn’t necessarily choose the Project Z Weedless for dock fishing, but he will if he’s dealing with a jumble of wires, poles and cross beams, or if there’s a lot of near-surface brush.

“If I’m just skipping it under docks that are pretty easy to access, then I usually use the normal one because I want that exposed hook,” he adds. “I feel like my hooking percentage is better if I don’t have to throw it [the Weedless model].” 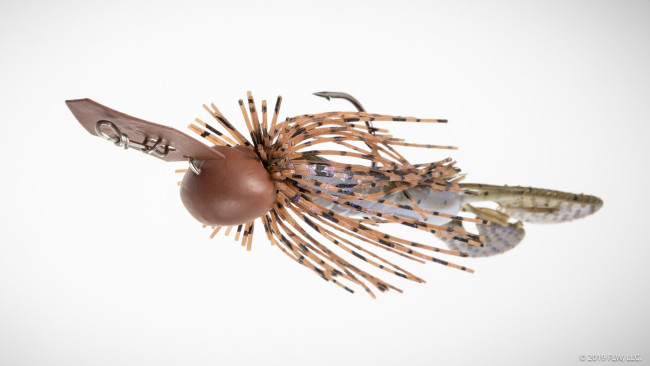 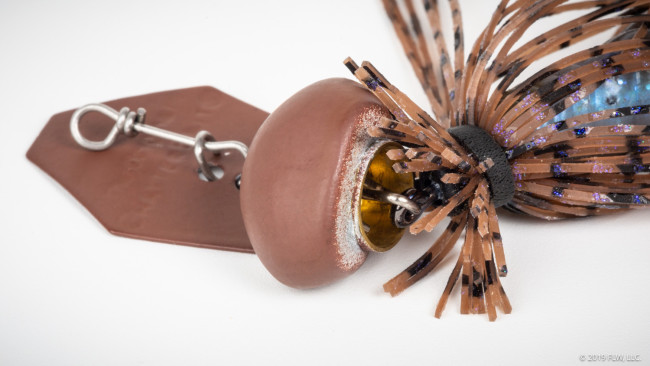 The ChatterBait Freedom CFL stays down

At ICAST 2019, Z-Man and Freedom Tackle released the ChatterBait Freedom CFL, which has a football-style head and an interchangeable, wobble-style hook connection. It comes rigged with a straight-shank VMC flipping hook with a skirt and lead barb bait keeper

Burghoff is still experimenting with the CFL to figure out all of its applications, but he’s thrown it enough to understand how it acts in the water.

“It does not want to come up to the surface nearly as much,” Burghoff says. “It’s not like a crankbait that wants to go straight down to the bottom and dig, but it’s kind of in the middle. It does want to hug the bottom a lot more.”

The CFL should be a solid option for slow-rolling around shell beds, rock and gravel in 10 to 15 feet in similar scenarios as you’d throw a wobble-head jig, but with more action.

“I’d probably put a craw on it,” adds Burghoff. “Z-Man makes something called a Turbo CrawZ, and that is what I used for testing it out. That probably has the best overall profile and action. You’re trying to imitate something different. It’s not the same as a normal ChatterBait.” 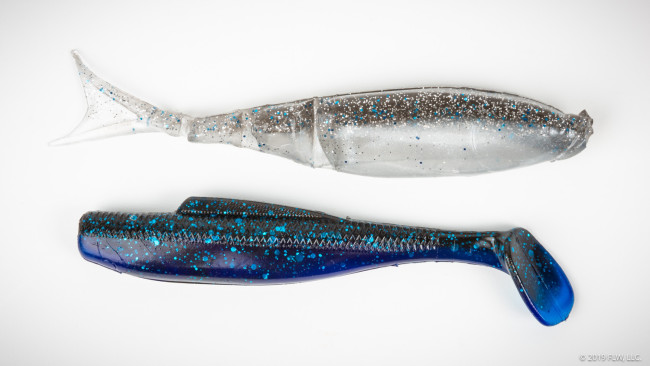 How to get dialed in

Trailers – Burghoff throws two trailers for most of his ChatterBait fishing, regardless of depth or situation. He uses the Z-Man Razor ShadZ in cold water. It has a straight tail that wobbles on the retrieve and causes the bait to glide when it falls, which works well in seasons when fish want something falling but not plummeting straight down.

The Z-Man Diezel MinnowZ is Burghoff’s choice for most warm-weather scenarios. It’s a 4-inch model that has a boot tail with more action. The tail also helps stop the bait’s forward motion when paused, resulting in a more vertical falling presentation to trigger a reaction bite. 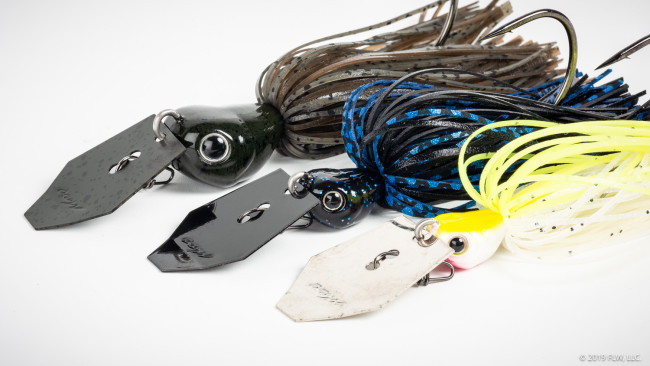 Head size – Burghoff reaches for a 1/2-ounce ChatterBait more often than any other size. It casts a long distance and can be fished through a wide depth range simply by changing speeds or adjusting the height of the rod tip above the water (a great technique to practice). He only goes lighter if he can’t stay shallow enough, and heavier if he needs to keep the bait deep on a straight retrieve.

The weight should be carefully considered for ripping and yo-yoing presentations, as well. A 1/2-ounce head can be fished this way down to 14 or so feet with a moderate fall rate that works even on sluggish bass. Stepping up to 3/4 or even 1 1/4 ounce creates a drastically different falling presentation that Burghoff likes for triggering bites on summertime ledges and around deep brush. The only pitfall is a heavy head will get snagged. Usually, the head can be bounced around like a plug knocker to get itself free, but that’s still something to keep in mind.

Adjustments – About the only adjustment Burghoff makes to a ChatterBait is to trim the skirt if he needs to imitate a small baitfish. Otherwise, he runs them all “stock.” He’ll also consider adding a trailer hook on the 3/4- and 1 1/4-ounce models. 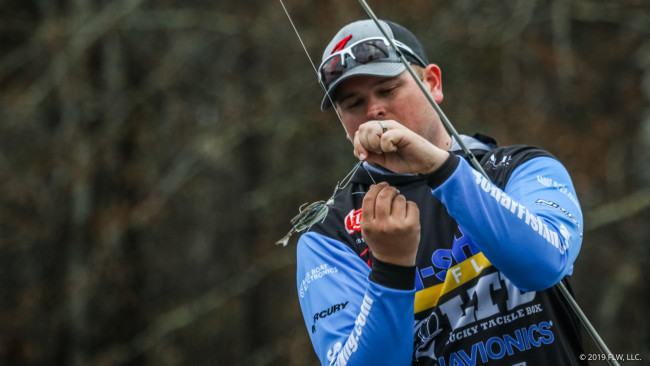 Line – While some anglers like to throw a ChatterBait on braid around grass, Burghoff is a fluorocarbon guy all the way because it has just a bit of stretch.

“What’s so important to me is a little bit of a delay when I set the hook,” he says. “A lot of guys think you should fish a more whippy cranking stick-style rod. I like a stiff, 7-3, medium-heavy. I use almost a worm rod. So there’s kind of a tradeoff.”

He throws 17- and 20-pound test most of the time. If he really needs to keep the bait down deep, Burghoff will go as light as 14-pound test. 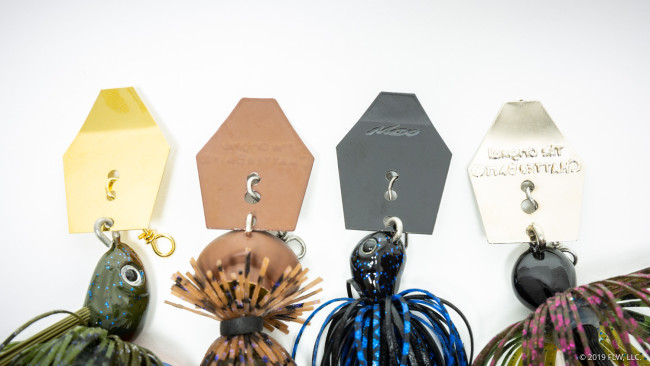 Blade color – In addition to different skirt colors, ChatterBaits come with a variety of blade colors. Here are Burghoff’s preferences: chrome in sunny, clear conditions; gold in dirty water; and black or green pumpkin for imitating bluegills or crawfish. 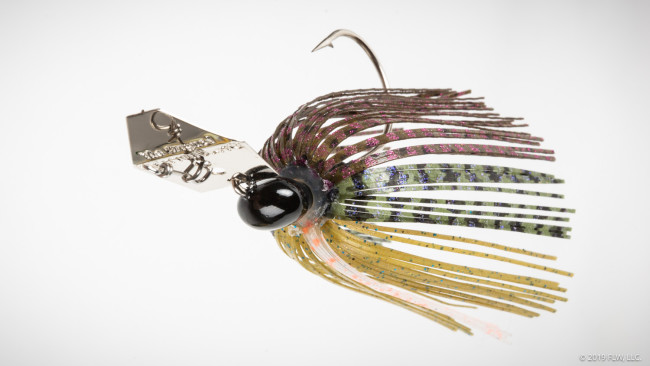 On a budget – If you want to stock up on some ChatterBaits and are on a budget, the Original ChatterBait is still a good choice. Z-Man has tweaked the design a little bit in the last couple years. The company added a lead barb keeper, which is a nice upgrade, and went to a twisted-wire line tie (new version shown above). The snap-style connection (like it had before) tends to promote a little more hunting action, but the twisted-wire tie is great in heavy grass and very durable. You might as well give it a shot and decide for yourself how much the connection matters for your fishing style. It doesn't cost much to find out, since Tackle Warehouse carries the Original ChatterBait for about $5.