How to Fish a Blade Bait for Smallmouth 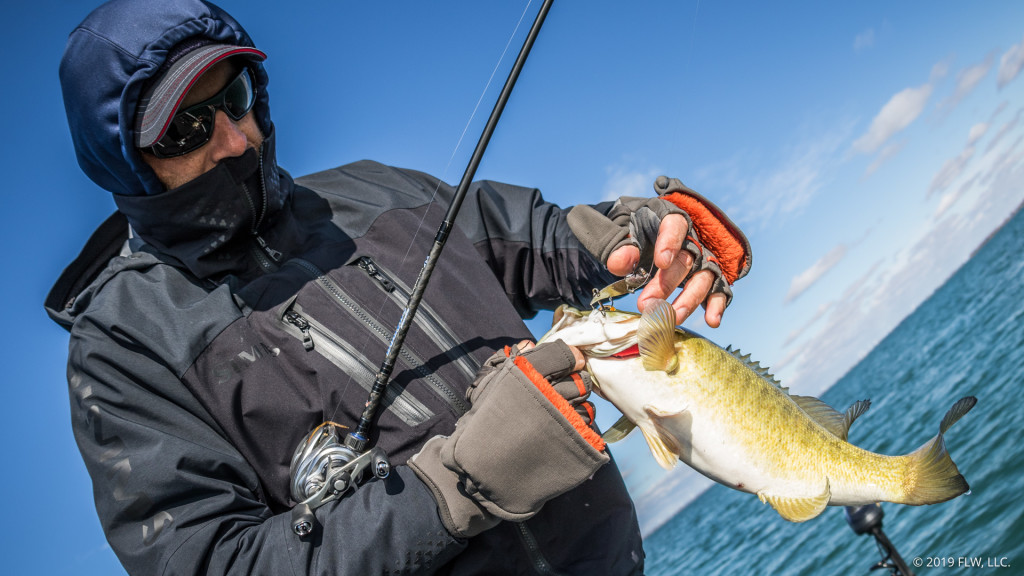 Up north, the fall smallmouth bite is unparalleled when it’s right, and it’s also fairly untapped. From October onward, many anglers start pursuing furry things instead of bass, and the weather deters others. It’s also virtually impossible to plan major tournaments in the fall up north. The weather is simply too dicey. All that adds up to unpressured smallmouths that are about as fat and healthy as they’ll ever be and willing to eat if targeted correctly. Outside of the prespawn, there’s no better time to catch a big limit, and on places like Lake St. Clair and the Great Lakes, you can be looking at 100-fish days.

Scott Dobson is as good at targeting late-season smallies as anyone, particularly in big waters of Michigan, and he’s been on the forefront of the umbrella rig movement for smallmouths. However, one of Dobson’s favorite cold-weather baits is far from new – a blade bait. In fact, it’s one of the oldest smallmouth baits around. 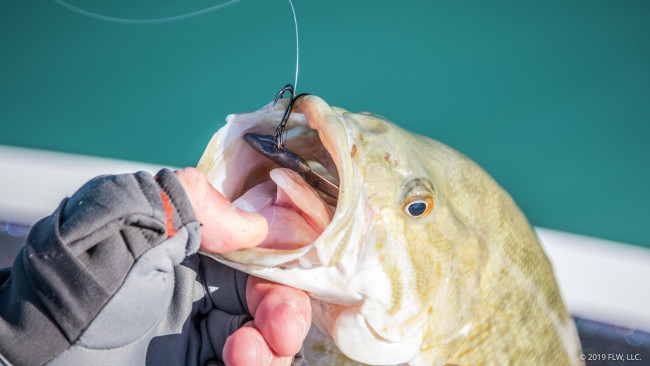 You can catch smallmouths on a lot of baits in the early fall, but one of the most consistent producers later in the year is a blade bait, and Dobson is an expert with it. His go-to is the old-fashioned Silver Buddy, but he has some distinct preferences and tweaks for better success.

Dobson prefers the Silver Buddy with a 3-inch frame, which is available in the 3/4-ounce model and no longer sold in the 5/8-ounce model. He says he’s got about 20 of the 5/8-ounce baits left, and he weighs the 3/4-ounce baits and hand-selects baits that are slightly lighter than their listed weight. Some of them will actually weigh less than .7 ounces, and those are the blades he likes. He also likes the smaller 1/2-ounce model, but cautions that it needs lighter hardware and works best in calmer conditions. In deeper water or heavier wind, Dobson is happy to sling the full 3/4-ounce blade.

Many blade baits come with cheap components, and Dobson likes to upgrade all of his on the Silver Buddy. Though smallmouths don’t fight their hardest late in the fall, he still wants to get every fish he can in the boat. Dobson typically employs a split ring at the top of his bait to connect it to his line, and he uses split rings to attach a pair of No. 4 Gamakatsu Magic Eye Short Shank Round Bend Trebles for hooks. The Magic Eye hook is designed to be easy to change without needing split-ring pliers, which is a big advantage on the water when his hands get cold.

Typically, Dobson sticks with the steel Silver Buddy to imitate baitfish, but be occasionally throws the gold color in dingier water. The only other blade baits he keeps on hand are “Cadillac” models with eyes or perch-like paint jobs, just in case he needs a different look. The list includes the Damiki Vault, Sebile Vibrato, Fish Sense Binsky and Vibe E. 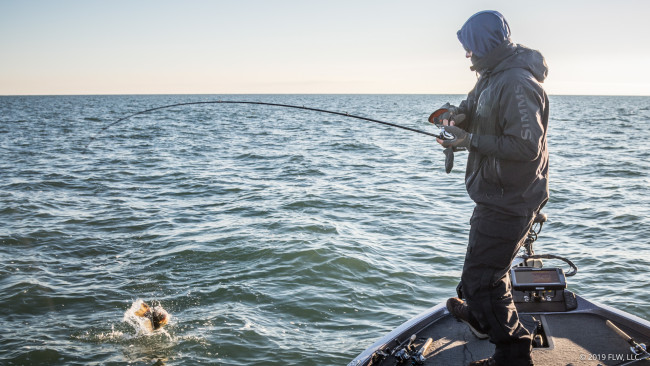 Dobson has a very defined rod-and-reel system for fishing blade baits that is designed to allow him to fish the bait easily and hook and land bass at a high rate.

He uses a 7.4:1 or 8.5:1 Shimano Metanium, 12- to 14-pound-test Sunline Super FC Sniper Fluorocarbon (the heaviest he can get away with for battling tons of big smallmouths) and a Dobyns Champion 704CB (7-foot, medium-fast) rod.

The rod is probably the most important part of the equation.

“It’s a sensitive and strong rod, and it has a nice parabolic action,” says Dobson. “The rod is forgiving when they jump, and you can load up and just bury those treble hooks in the fish’s mouth.”

One of the keys to landing fish is never setting the hook, at least in the traditional sense. The Michigan pro always just reels as fast as he can when he feels a bite, letting the rod and the line do the work for him. It’s very tempting to drop the rod tip and swing, but that’s almost a sure way to miss a fish. 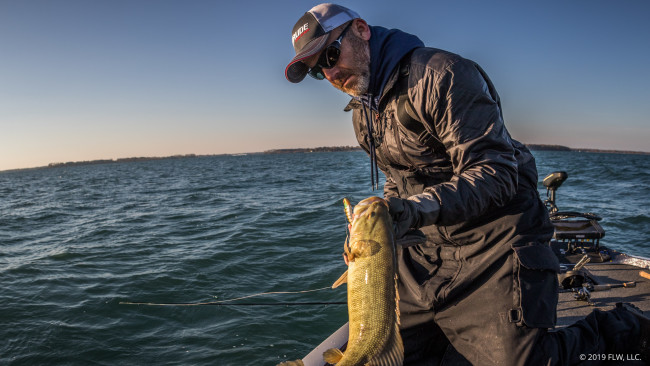 Come late fall on the Great Lakes and Lake St. Clair, smallmouths looking to feed can group up in pretty predictable places. Once the water temperature falls below 55 it’s game on, and the fish usually stay pretty aggressive until the water drops down into the low 40s.

“The whole system has somewhat of a current-related aspect to it, and when the water cools the fish move into more current-related areas and places they can ambush baitfish,” says Dobson. “There seems to be a migration of shad and alewives to places with any type of current – whether it’s shallow current at the mouth of the St. Clair River, or where current rolls out into the lake or the mouth of the Detroit River. It’s a natural progression for the bass to follow the bait, and they like eating shad in the fall.”

Dobson avoids targeting areas directly in the heaviest current. He figures smallmouths don’t want to fight it. Instead, he looks for seams of light current near stronger flows. On the south side of St. Clair, he targets rock ridges near the mouth of the Detroit River. On the north end of St. Clair or in Lake Erie, he targets the backsides of humps or eddies – places where smallmouths can wait for dying shad to wash past them.

Of course, with big water in play, not every bass sucks right to the current. Dobson also targets sand patches around cabbage in 12 to 15 feet of water. Current isn’t as much of a factor, but because cabbage stays firm and green longer than anything else, shad and perch will migrate toward it in the fall, and the smallmouths will wait for them.

“The bass will kind of sit in the grass and look out at clean spots – whether it’s sand or gravel,” says Dobson. “Then they can run out and ambush bait that moves into that open area.” 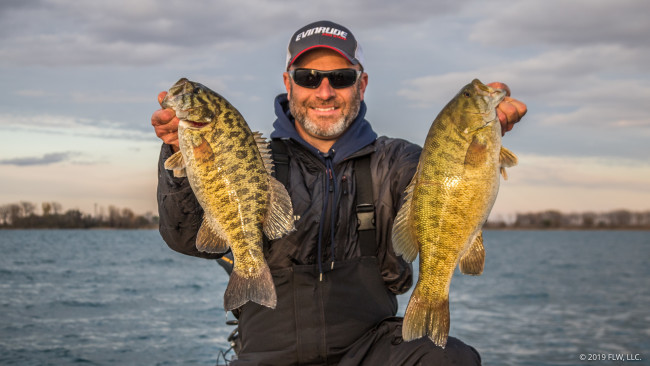 It’s easy to chunk a blade bait around without thinking much, but Dobson’s technique sets him apart.

“When I first started fishing the blade bait, I would catch fish on it here and there, but I would miss a lot of fish. I would think that I was getting bit and swing and set the hook and come up with nothing but a blade bait,” says Dobson. “I always tell my buddies ‘less is best.’ The whole premise of the bait is to work it like a dying baitfish. It might kick up and flutter back down, but you don’t think of a dying baitfish that is flipping up 3 or 4 feet and then falling back down. They might kick up a few inches and then lie there. That’s how I want my bait to work.”

The presentation starts with a short cast or long pitch – about twice the distance of a “typical” pitching presentation. In deeper areas, Dobson might even drop straight down.

“I always let the bait fall on a semi-slack line and watch my line, because a lot of times they will hit it just when it starts to fall or just before it gets to the bottom,” explains Dobson. “When it is on the bottom I kind of check my slack and hold the rod at about 3 o’clock. Then I pick up the rod a few inches and then let it fall back down on a semi-slack line. A lot of the bites come when it gets to the bottom. As you lift up to make your next hop you’ve got to be ready – not to drop your rod and set the hook, but to wind really fast and pull into them.”

Dobson will also “park” the bait on bottom like a tube or shake it in place, especially if the fish are more tentative or the water is colder.

Fishing a blade bait like Dobson does it isn’t the easiest thing to master. It takes a lot of restraint, but when you do it right the payoff can be immense. Fall smallies are wonderful critters, and a blade bait remains one of the most efficient ways to target them.