How to Catch Tailrace Smallmouths 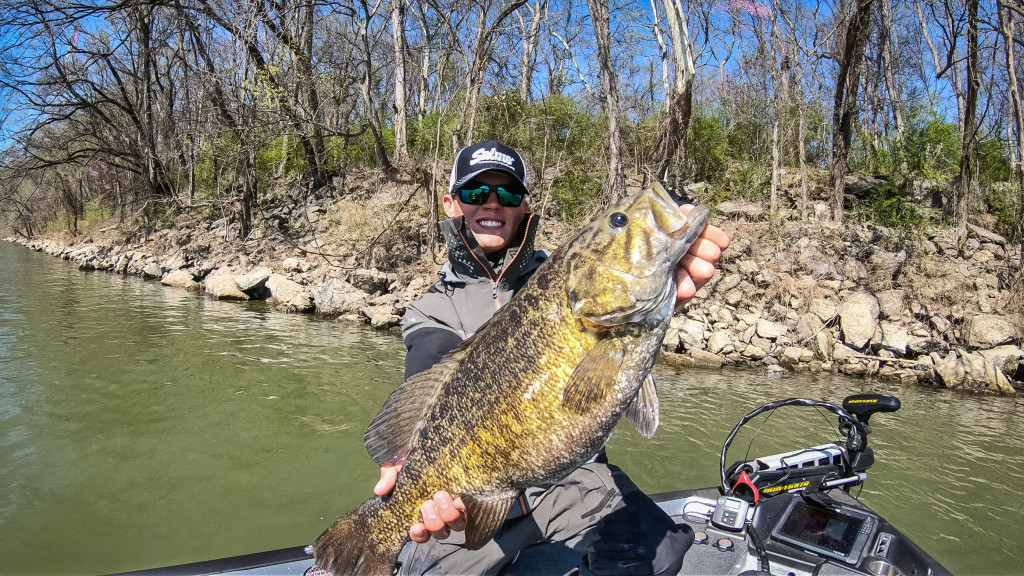 The reservoirs strung along the Tennessee River are tremendous fisheries, but they perhaps don’t get as much shine for being smallmouth producers as they should. Every year, in the tailwaters of the dams, plenty of anglers run into 6- and 8-pounders fishing in the current.

Though easily accessible, their current-swept environs are tricky to fish if you don’t know what to do, and frustrating to the enth degree when you start losing tackle in the rocks.

Luckily, Tackle Warehouse Pro Circuit pro Sam George has the inside scoop on how to pluck big smallies from current.

Know the movement of the fish

Most of the best tailrace smallmouth action on the Tennessee River takes place below the Wheeler and Wilson dams, but there are smallmouth bass to be found below most of the dams in the system, from way up by Watts Bar to the dams at Pickwick and Kentucky.

According to George, the best time of the year to fish is the spring, and you encounter the same prespawn, spawn and postspawn phases that fish anywhere else go through. But, instead of the fish moving a long way, they simply move out of the current to spawn and then back in when they’re done.

“When you’re actually fishing the current it’s generally going to be prespawn fish or postspawn fish,” says George. “When you’re throwing power-fishing stuff and actually drifting, those are all prespawn or postspawn fish. As the spawn approaches, with the warming water temperature, that current bite will start fading. The reason that happens is those fish are making their way to somewhere out of the current.

“It can be behind an island or rocks or a cut, but they have to get out of the current to spawn. That’s the No. 1 rule for them: They can’t spawn in that heavy, heavy current. You’re going to see it transition from that power-fishing stuff to finesse fishing. When they’re in that area they’re there for one reason, and that’s to spawn. There will be a week or two where that’s the deal, and then you’ll see them transition back into the current where they’ll be the rest of the summer.”

George says that the movement of the fish is pretty obvious once you understand that a lack of current is key for the spawn. Typically, close to the spawn, the fish will be closer to slack areas or even right on the seams. After the spawn, they’ll get on the same stretches close to their spawning grounds and then move deeper as the season goes on. In the prespawn, when the fish are close to spawning, the best drifts are often fairly shallow, in just 5 to 8 feet of water. Later in the summer, targeting fish in 10 to 15 feet is more common.

When actually fishing for prespawn and postspawn fish in the current, George employs a drift-and-cast approach. He’ll run up to where he wants to fish, then maintain a drift at about the same speed as the current with his bow pointed into the current. Getting the cast and retrieve correct is the whole key, and the difference between a great day of fishing and a mess of trying to retrieve snagged tackle.

“The absolute, No. 1, most important rule and the difference between getting bites and not getting bites is angles,” details George. “I never want there to be a time where I am pulling my bait faster than the current, and I never want my bait to be going into the current. The reason I drift is for two things: You’re going to get a hell of a lot more bites, and you’re not gonna get hung near as much.”

George typically casts a swimbait and winds it back slowly.

“There’s usually so much current that it’s really hard to sit still,” says George. “All the fish in current are sitting behind something, and it’s so specific that it’s really hard to hit every time. If I have my trolling motor sitting dead into the current, I’m casting about 45 degrees [upcurrent] every time. That way that angle will drift perfect with my boat. So, when I make a cast, I want it at a 45-degree angle, and when my bait gets to the rod tip I want it coming in at a 45-degree angle. I want my drift to be at the same speed as my bait. It’s going to allow you to get your bait behind those eddies where the fish are sitting, and it’s going to keep you from getting hung a million times

“I’m usually trying to make a moderate cast, just because the more line you have out, the more that bait is going to try to go down. You’re actually trying to keep that bait up a little more, and it’s gonna cause a lot of bow in your line if you have too much line out. If you don’t have your angles right and the right equipment, basically the only thing you’re going to do is break off a thousand dollars worth of stuff.”

One key adjustment to his tackle to allow better drifting is his line size. Instead of going with heavier 16- or 20-pound-test fluorocarbon, George always uses 12- or 14-pound test. That smaller-diameter line lets him cut through the water better and maintain the feel of his bait while he’s working it back.

The actual direction of the cast and the line aren’t the only important parts of the equation. How you fish the bait back is key as well.

“Holding your rod up at an angle is another important aspect,” says George. “You want to just barely keep the bait on top of the rocks and eddies. I’ll make a cast and hold my rod at almost a 45-degree angle and wind. You’re not wanting to constantly tick rocks, but every 10 to 15 feet of the cast I want that bait to tick a rock. That will help you keep your bait down, right above the cover, where a smallmouth is able to come up and eat it and go back down. You want to keep it right in his wheelhouse, where he can shoot out from behind a rock and eat it. When I tick a rock, usually I give the rod one shake and a quick turn of the reel to get the bait back up, and then start slow-winding again.”

Learning to fish in heavy current is a skill that a lot of bass anglers never have to develop, but once you can get it dialed, you can have a big payoff. 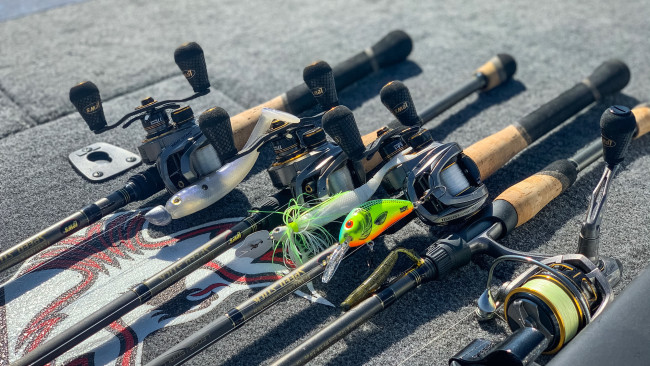 More often than not, George relies on a 1/2-ounce jighead with a 4 1/2-inch Strike King Shadalicious Swimbait. Matched up with 12- to 14-pound-test fluoro, George uses a 6.8:1 gear ratio Lew’s reel and a Team Lew’s Custom Pro Mark Rose Ledge Swimbait Rod, which is 7 feet, 6 inches and sports a moderate-fast action and a medium-heavy power. Though a 1/2-ounce head gets the call the vast majority of the time, George will upsize or downsize occasionally in very heavy or very light current.

“What has really become one of my favorite in the last year is the Thunder Cricket, but in the 5/8-ounce size. That’s almost the perfect one. It’s kind of become a mainstay in my arsenal for drifting in the current,” says George. “In the summertime, I really like the Salmo 6.5 crankbait. The bill is really wide on it, so it really stays free of the rock well. And the Strike King 8.0 is good as well. Those are usually the two I throw the most. That 8.0 has the Tennessee River, 10XD-size body, but you can throw it shallower in the current.”

For the non-current fish, things are a bit easier. You pretty much just need a Ned rig. George likes a Strike King Rage Ned Cut-R Worm on a Trokar Tungsten Pro-V Finesse Jighead.

“What I like about that one is the hook,” says George. “You’re around world-class smallmouths when you’re doing this, and the typical Ned rig hook is so small. It [the Trokar hook] locks in their jaw it seems like. You have to use pliers almost every time.”

Another fun way to target smallmouths around the spawn or in light current is with live bait.

“Honestly, that’s how I grew up fishing down there, and every now and then I still take a bucket and go over there,” says George. “It’s a simple deal, just 6-pound line and a split-shot rig.”

Fishing shiners around the same areas he’d fish a Ned rig, George uses a small split-shot about 14 inches above the bait and a No. 2 drop-shot hook.

“Usually I throw it in light current of the slack water. It’s a springtime deal for me, or when it gets really hot. The best time is when they get up spawning and you’re throwing a Ned rig around.”

George actually caught his personal best smallmouth on a shiner. The monster rang in at 8-3. Whether catching a new personal best or not, it’s certainly a fun way to get back to the roots of fishing.

Though mastering the art of fishing in current is hard and will usually result in a fair bit of lost tackle starting out, it’s definitely worth it. Not only will it give you a chance to catch the smallmouth of a lifetime, but it can improve your fishing all the way around. Feeling and fishing a bait in heavy current is a skill that will translate beyond just those drifts, and it’s something absolutely worth learning if you have the time and love smallmouths.