An Outsider’s Guide to Catching Bass in Florida 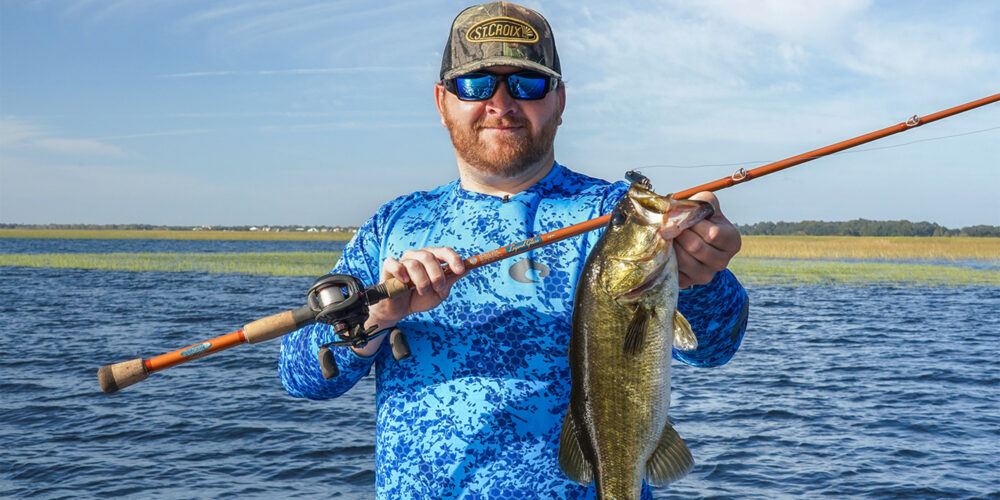 Florida is a bass-fishing paradise, with water (and largemouth) virtually everywhere. Those facts combined with the mild winters attract visitors from colder climates every winter to escape the brutal winter, put on some flip flops, and target big Florida bass.

Alabama’s Jesse Wiggins and Oklahoma’s Jeff Kriet enjoy making the trek to Florida, and offered some hard-earned tips on quickly breaking down good bass water in the Sunshine State.

As he idled away from the boat ramp on a November morning, St. Croix pro Jesse Wiggins marveled at the abundance of cover on the lake he was fishing in Central Florida.

“Man, this all looks so good,” he mused. “That’s how Florida always is. Most of it won’t have any bass, and they’ll be grouped up somewhere on this lake.”

Wiggins is known for his prowess with spinning gear and is a guru when it comes to spotted bass, but he’s also tasted success in Florida with a 2017 Bassmaster Open win on the Harris Chain of Lakes.

His approach to fishing Florida is to cover as much water as possible, and when he gets a bite, to milk the area for all its worth.

“That’s what I did at Harris Chain (in 2017),” Wiggins shares. “I got a few good bites in one area during practice and I stayed there all three days of the tournament. Most of the time in Florida, if you find an area with some fish, you better stick around because that’s a good place to be.”

When everything seemingly looks the same, Wiggins starts fishing until he starts to put together the puzzle pieces.

“Most of the time, you’re going to be fishing shallow and around vegetation, and that makes it harder to graph and use your electronics to find fish,” he says. “I experiment. I fish it all until I start to figure out the right depth and right kind of vegetation that’s holding fish. I’d say the area is more important than the lures you use in Florida, because if you’re around fish, they’ll usually bite.”

As a seasoned veteran with plenty of tour-level Florida experience under his belt, Oklahoma’s Jeff Kriet keeps things simple when it comes to his Sunshine State tackle.

“It’s relatively simple in Florida because you aren’t going to be fishing deep and you’re almost always around vegetation,” Kriet says. “That’s just what you do in Florida. You need a ChatterBait, a swimming worm like a Big Bite Baits Tour Swim Worm, and either a trick worm or Senko-style bait with a light weight. You can also add a swim jig and frog, but that’s about all you need.”

With his tackle supply limited, the two other keys that Kriet looks for are a hard bottom and clear water.

“I’ll drive around and start sticking my rod into the bottom to find those harder areas,” he says. “Especially in the spring, they need that harder bottom to spawn. If it’s soft and mucky, they won’t be around and I won’t even stop to fish.”

When it comes to water clarity, Kriet says the clearer, the better.

“It’s not like Texas or Oklahoma where you seek out that dirtier water to power fish,” he says. “If the water is stained, the bass vacate the area, so I’m always looking for the cleanest water I can find.”

One of the most significant influencers of water clarity is vegetation, and that leads to Kriet’s final piece of advice: fish it all until you find what vegetation is best on a given day.

“It can be confusing with so many types of vegetation in Florida, so I pick one and start with that,” he says. “You might start with arrowheads or pads and then try cattails or eelgrass. The bass will prefer one or the other based on the time of year and body of water.”

But, there is one type of vegetation that he always seeks out.

“I always want to be somewhere near hydrilla if I can find it,” Kriet shares. “That’s always a good hydrilla (patch) to seek out, and it’s even better if it’s mixed with other grasses. Florida is miles and miles of the same thing, but when you find the fish, you’ll generally get several bites in that area.”