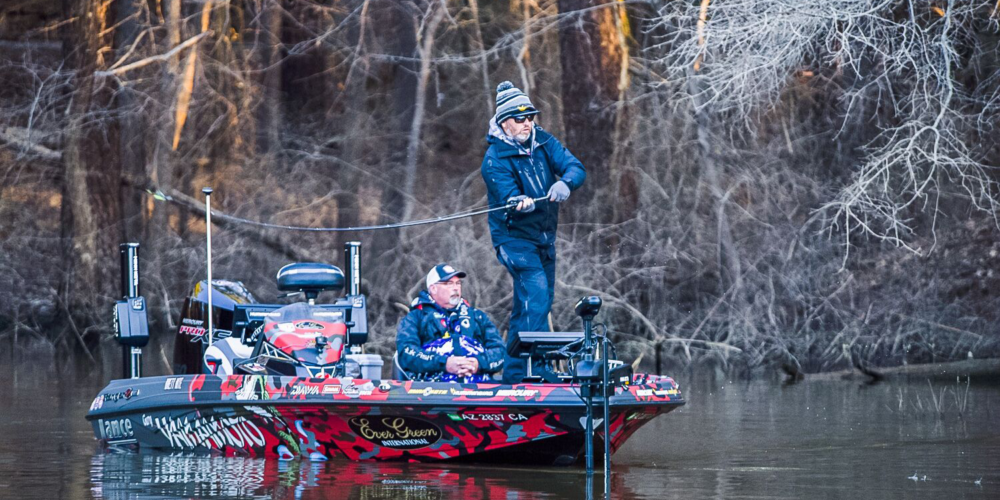 Brett Hite explains why using a vibrating jig in the fall can be a game changer. Photo by Garrick Dixon
September 27, 2019 • Mason Prince • Major League Lessons

“The fall is really just a time of extremes,” said MLF pro Brett Hite. “You can catch them in 50 feet of water, or you can catch them really shallow. If you are able to find them up shallow, that’s when having a vibrating jig in your arsenal will really shine through for you.”

Once fall rolls around we hear how topwaters are a steady and reliable bait thanks to schools of shad in shallow water. But as you just read, Brett Hite thinks adding in a healthy mix of vibrating jigs to your fall lineup can be just what you need from late September to November.

“The biggest piece of advice that I have is to go fish a vibrating jig in the fall just like you would a spinnerbait,” Hite advised. “You want to be around some kind of cover like rocks, riprap, brush piles, or grass. The great thing about vibrating jigs is that they work in all different colors of water as well, so you won’t be very limited on colors.”

Reaching for the Right Rod

During the fall, Hite likes to turn to a Z-Man Chatterbait Jack Hammer with a Yamamoto Zako trailer. The colors he reaches for in the fall are usually Clearwater Shad or Green Pumpkin Shad. Hite says to seek out the bait fish where you are fishing to get an idea of what color can work best for you.

When it comes to the rod, that’s what makes all the difference for Hite. He says a lot of anglers reach for a graphite-based heavy action rod, but that’s not ideally what he prefers. A 7-foot-3 Evergreen International Combat Stick with heavy action is his tool of choice, but instead of graphite he goes with a glass rod.

“For me, you have to be using a glass rod with your vibrating jig,” Hite advised. “You need a rod that is really parabolic and has that bend throughout the whole rod. But it also needs to be heavy action so that you can horse those fish out of that cover you are fishing in. The biggest misconception about a vibrating jig is that you fish it like a regular jig. You really should think of it more like a crankbait. You’ve got to have a rod that allows the fish to eat the bait and that will help you land a lot more fish.”

As for his reel of choice, a Daiwa Tatula Elite spooled with 20-pound Sunline Super FC Sniper fluorocarbon does the trick for him. If you aren’t sure that you want to go for that particular reel, Hite says as long as you pay attention to the gear ratio, that’s the most important aspect.

“You are going to need a reel with some really good drag,” Hite tipped. “Make sure that you have a nice handle on the reel as well. I like the 6.3:1 gear ratio so I can slow roll the bait or move it fast. It’s kind of in the middle of both ends of the spectrum so that’s why I like it.”