Ehrler Breaks Down the Jerkbait: The Tiny Details that Will Get you More Bites 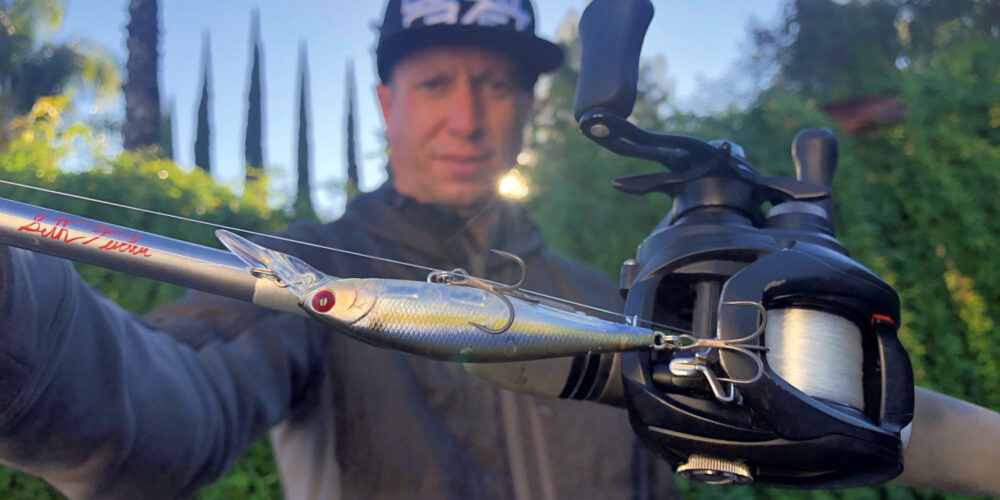 The jerkbait is a staple for bass anglers during the colder months, but they work all year long. They’re available in a host of different sizes and shapes, and even more color options.  With so many choices, it often comes down to the little details.

Over the years, Brent Ehrler has learned that minor changes in his approach can increase his odds when fishing a jerkbait.

Ehrler fishes Lucky Craft jerkbaits, and they have countless different jerkbaits and sizes available. With that being said, he says three of their lures – one small version, another with a bulkier look, and finally, an all-around size – will cover most of his needs.

“The Flash Pointer 110 is a good all-around bait and the one I use the most,” Ehrler said. “I like the 78DD for smallmouth and when I want a smaller profile bait. The Pointer 100 H3 is a new three-hook version, and it has a little bit bulkier look than the other jerkbaits.”

“I like that lighter rod because I feel like you land more fish and don’t pull thee treble hooks out as easily,” Ehrler said.

All three of the baits he mentioned are suspending jerkbaits, but he says cold water affects the action of the water.

“When the water is cold, suspending jerkbaits will sink slightly,” he said. “You can also adjust how your bait acts by swapping out hooks.”

For most of his jerkbait fishing, Ehrler sticks with 10-pound Sunline FC Sniper fluorocarbon.

“That is my standard, but I’ll also use 12- and 14-pound – especially around grass or timber, I switch to 14-pound,” Ehrler advised.

When it comes to hooks, Ehrler said a simple swap could change a suspending jerkbait to a sinking version, or even a slow-floating bait, and it can also affect how quickly he can work the lure.

“If I’m fishing for smallmouth or want to fish a jerkbait faster, I like to switch to the Gamakatsu EWG short-shank trebles,” he said. “They’re a heavier hook and will cause the bait to sink slightly. Since they’re short shank, you can also go up a size, and they’re very stout so you won’t ever bend them out.”

“They’re extremely sharp and let the bait suspend perfectly because they are lightweight,” he said.

A Simple Approach to Colors

Just as Ehrler typically sticks to three different jerkbaits, he also has a trio of colors that get the bulk of the action.

‘When it’s clear and sunny, a translucent color like Ghost Minnow is the best, day in and day out,” he said. “If it’s overcast with dark skies, a brighter color like Chartreuse Shad is going to be my choice.”

The third color he relies on is used when he sees something specific in the water.

“I’m always looking in the water for shad, and a lot of times, you will see them just swimming along, and you can only see their backs. But, there are times when they are rolling and flashing,” Ehrler began. “If I see that flickering in the water, I will go with the Aurora Black color.”

Where and How Ehrler Fishes a Jerkbait

When deciding where to fish a jerkbait, Ehrler sticks to the high-percentage locations.

Ehrler has learned that changing your cadence based on the season (and also the region) can lead to more bites.

“There are some places that they prefer to a long pause,” he said. “The White River lakes come to mind, and Clear Lake, California. They love a jerkbait sitting still. Generally, I have a long pause during the winter and will adjust anywhere between two to twenty-seconds. I’ll go back and forth and vary the length of the pause to see what they want that day, no matter the season.”