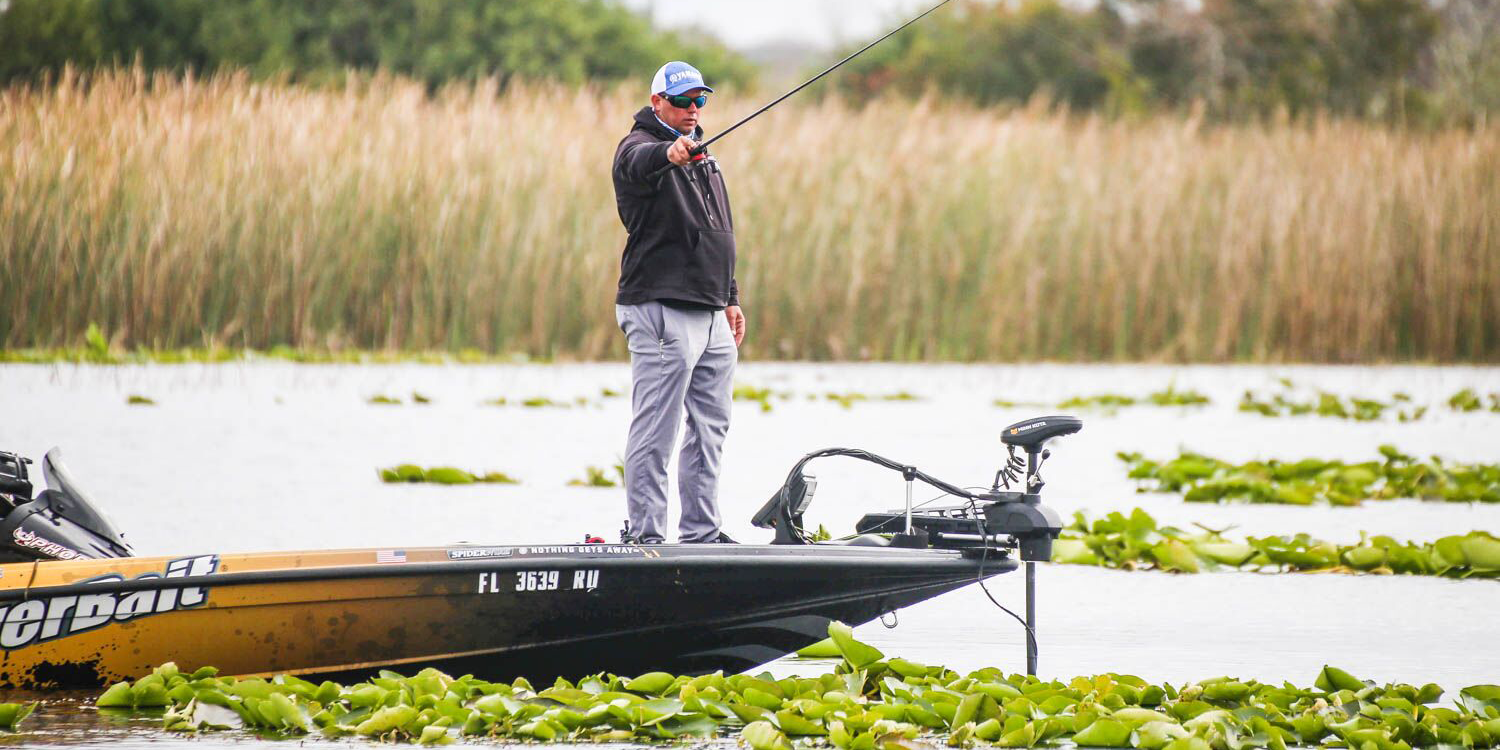 Bobby Lane fishes matted vegetation during Stage One of the Bass Pro Tour in Kissimmee, Florida. Photo by Phoenix Moore

The fall-fish-catching message from multiple MLF pros has been pretty clear over the past couple of months: follow the shad, move to the backs of creeks and work shallow.

That may be the message that a majority of the country needs to hear right about now. But in the autumnal anomaly that is the state of Florida, Shaw Grigsby and Bobby Lane know just how different fall can be.

“I don’t really know if we have a fall,” Grigsby said with a chuckle. “We’ll start to get some cold fronts in October when it kind of feels like fall, but I have actually seen fish spawn in late October. Come fall in Florida, these fish start to get really aggressive, start feeding and become really fat.”

“It’s really junk fishing 101 down here in the fall because you never know what you’re going to catch them on,” Lane said. “You really want to keep an open mind.”

Canals, Wood and Rocks Instead of Creeks

In states north of Florida, you’re almost guaranteed to find migrating bass in the backs of creeks on the hunt for shallow-lurking shad. However, Florida lakes don’t offer much in the way of creeks, so Grigsby and Lane recommend heading toward the canals. They both say it’s a surefire way to find plenty of bass.

It’s also a surefire way to find plenty of fishing pressure. Instead of fighting for real estate in a canal, Lane suggests looking for a couple of different forms of cover and structure.

“Our canals can get very overpopulated with fish and fisherman alike when the bass head shallow,” Lane advised. “There’s not really any docks to fish like you find up north, so I like to look for a couple of different things. I like to find wood because it gives the fish something to get up against that warms faster. If you can find any rock or riprap at all, that’s another thing as well. Cranking down riprap is a great strategy in the Florida fall.”

Florida lakes are well known for aquatic vegetation, and while the fall may begin to kill off the grass in Tennessee and Alabama lakes, that process is either a tad delayed or doesn’t happen at all in Florida, according to Lane and Grigsby.

“That grass is here pretty much year-round,” Grigsby confirmed. “Unless the state decides to kill off the grass by spraying, it will usually stay around until about December. Fall is really a great time to work around those matted piles.

“If you can find some grass that’s starting to decay, that’s a money spot to fish,” Lane recommended. “In the cooler weather, the fish love to hang around that grass. Once that grass starts dying off and the mats start separating, you can really pick them off one at a time. The difficult thing is finding them when they get to moving around, because you never know where they’re going to go.”

Keep Spawn Sites on Your Radar

Florida’s warmer fall climate prolongs the pre-spawning period, according to Lane. Other parts of the country might see early pre-spawn in December or January, but Lane points out that Florida’s largemouth often enter pre-spawn in October and November.

“You have to remember that a lot of these fish have been living offshore for two or three years, and they’re never going to wander far from where they’re going to spawn,” Lane said. “Because of that, you can never rule out those shallow spawning areas. The fluctuating water temperatures here in Florida really keep those big females close to their spawning grounds. I start my days by working my way from the outside to the inside of the spawning bays.”

Grigsby and Lane have some suggestions when it comes to baits you should tie on when fishing Florida in the fall.