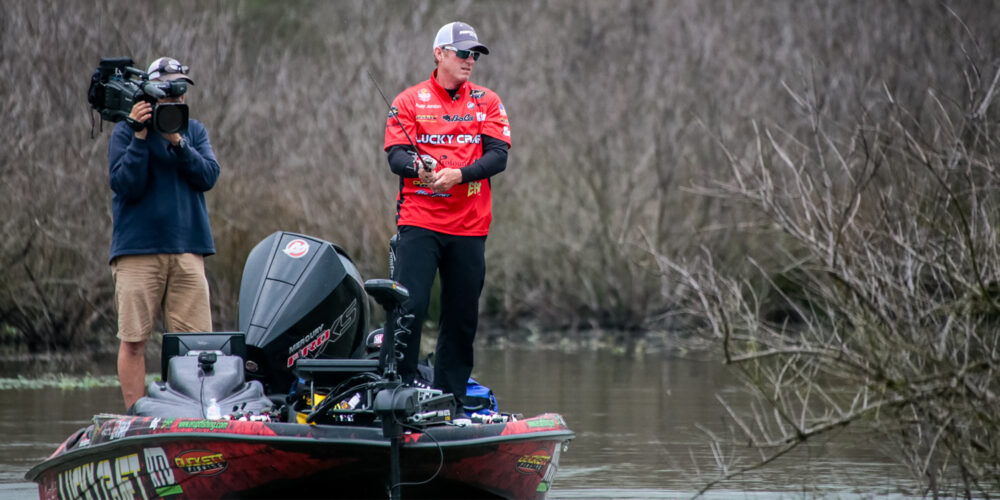 In Fall is Baitfish Time (Part 1), Kelly Jordon outlined his “match the hatch” approach to fall fishing and explained how lipless crankbaits, walking lures, buzzbaits and big spoons factored into his fall arsenal. He completes that fall arsenal here.

Bass anglers frequently hail — and sometimes damn — autumn as the “junk fishing” season. Empty your tackle box if you like, they say, for it can be a hard time to nail down a pattern that will hold up from one end of the lake to the other. One fish on a crankbait, another on a buzzbait, two more on an Alabama rig, one more on a spoon…eight different lures might lead to a 10-fish day.

Like many bass anglers, Kelly Jordon goes to battle with eight rods on deck and others ready-rigged in the rod locker during this season. But the strategy of MLF’s big-fish specialist from Texas has nothing to do with the randomness of junk fishing.

Jordon maintains that 99.9 percent of the baits he throws in fall are imitations of shad or other baitfish.

To Jordon, those rods at the ready feature an array of baits to imitate the size, look or action of the spectrum of baitfish that bass might key in on that day.

The soft swimbait has revolutionized how bass anglers fish in the fall, Jordon maintains.

“It’s the perfect baitfish imitation,” he says. “When water temperatures are in the lower 50s and 60s, a swimbait is just deadly, and it will continue to work until bass move shallow in spring.”

When fish are suspended in the water column, Jordon rigs his swimbait on a 3/8- to 1/2-ounce jighead and presents it with a slow, steady retrieve.

When bass are deeper and clinging closely to the bottom, he will go to a 3/4-ounce jighead, and, more often than not, a larger swimbait.

“Usually it’s a steady medium or medium-slow retrieve, almost a slow roll,” he says. “You can also hop it off the bottom, slow roll it, or wind real fast five or six times, then stop and let it sink.”

An underspin rig may come into play when temperatures drop.

“The colder it is, the better that underspin gets,” Jordon says.

The Alabama rig offers bass a garish swimbait assortment — swimbaits at the max.

“Bass are feeding heavily this time of year,” Jordon says. “Fall and winter are the best times of year to fish this rig.”

The subtlety of a swimbait prompts a reminder regarding water clarity.

“Keep in mind that visibility is key,” Jordon advises. “You need at least decent water color to fish swimbaits effectively. They are very ‘visual’ baits.”

When water temperatures range from the mid-50s to 70 degrees, a suspending jerkbait becomes a “big time” player for Team Jordon.

His jerkbaits of choice come from the Lucky Craft Pointer series.

“Lucky Craft revolutionized the suspending jerkbait with the Pointer,” Jordon asserts. “It set the bar, and is still the standard.”

He arms himself with a variety of sizes, colors and bill lengths.

“Jerkbaits come in different profiles, sizes, and lengths…slimmer ones, thicker ones. You need a mix to match your lure to the size of the baitfish,” Jordon says.

A baitfish that a bass spits up during a fight or in the livewell can help him determine his size selection and color for the day.

“Maybe they’re hitting gizzard shad or blueback herring,” he says. “Try to find the size and type of baitfish they’re feeding on.”

A spoon can be tough to beat any time bass are positioned deep and on the bottom, summer through winter.

Jigging spoons like the Cotton Cordell C.C. Spoon are compact, heavy, and fast-sinking.

“They’re great because they’re smaller, and are ideal when bass are feeding on smaller baitfish,” Jordon says. “You can cast them, but they really shine when fished vertically.”

Soft plastic jerkbait: When bass are shallow, this weightless shad imitation can be tough to beat.

Spinnerbait: “The spinnerbait comes into its own big time in the fall,” Jordon says. “It’s a great shad imitation.” His workhorse is a 3/8-ounce double willow blade in white or white/chartreuse.”

Squarebill crankbait: Like the lipless and flat-sided crankbaits Jordon described in Part 1, a squarebill is a great way to cover water and locate fish.

Drop-shot: Jordon admits to fishing it only sparingly in fall, but he hates to be without it. His bait of choice is the Berkley PowerBait MaxScent Flat Worm.

Wakebait: The mesmerizing V-wake of a steadily retrieved wake bait can wake up plenty of bass action in fall.

“You can fish it in open water, shallower bays, over the tops of vegetation, near docks…,” Jordon says. “It’s a slower presentation that gets bites from big fish.”