Mark Rose Loves the Versatile Ledge Spoon, and So Will You 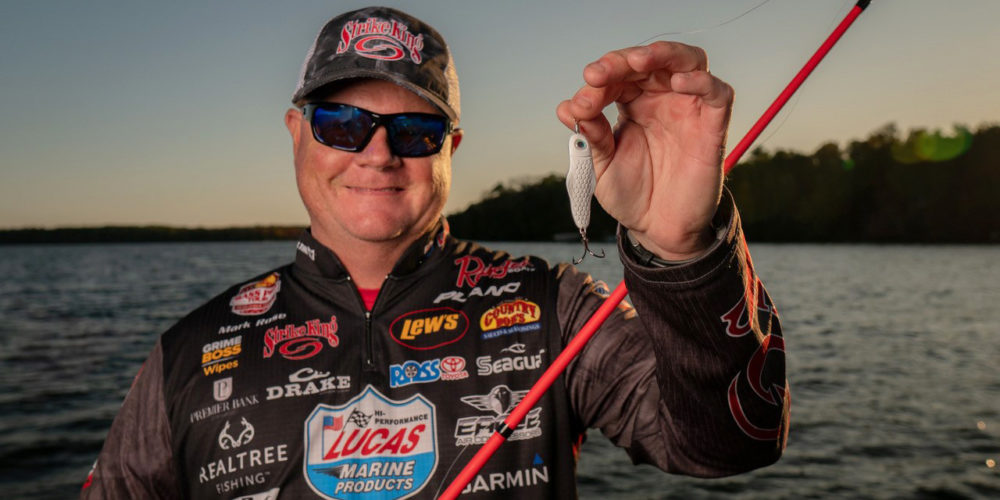 Mark Rose's fondness for a spoon is warranted: the Strike King pro has won plenty of money thanks to this simple bait. Photo by Brad Richardson
November 18, 2019 • Mike Pehanich • Major League Lessons

Mark Rose may not have been born with a silver spoon in his mouth. But if you talk to the many competitors who have envied his success, you might conclude he was at least born with one at the end of his fishing line.

Indeed, casting spoons to the ledges of Tennessee River impoundments has accounted for a good deal of Rose’s success over the years. That includes an FLW Angler of the Year award in 2018 and a Top 10 performance in the points race on the Bass Pro Tour series this past season. He credits a portion of that success to his realization that a jigging spoon is not a one-trick tool.

“So many anglers think a jigging spoon is just for vertical presentation, something you jig with while viewing the images on your 2-D electronics,” says Rose. “But, guys, if you think that, you’re missing out on so many other applications for the spoon.”

Take the High Road AND the Low Road

Many anglers are fooled by the simplicity of a spoon, one of the earliest lure designs of the modern tackle era. Not Rose. He has proven the jigging spoon’s versatility with a variety of “high road” and “low road” spoon applications.

One “high road” presentation is to cast a spoon to bass schooling offshore.

“Say we’re throwing Sexy Dawgs and other topwater baits when bass are herding baitfish,” says Rose. “I’ll pick up my jigging spoon rod and outcast you and everyone else with a (Strike King) Mark Rose Lil’ Ledge Spoon. That 1-ounce bait cuts through the wind, cuts through the water and gets deep quickly, too. “

Fishing “schoolies” is dirt simple, too.

“You can just reel the spoon through the school,” Rose adds. “Bass eat the flash.”

Rose elevated the art of ledge fishing with some of his “low road” jigging spoon presentations, presenting spoons to bass positioned on offshore structure.

“On the Tennessee River reservoirs today, plenty of anglers are throwing Alabama Rigs and (Strike King) 6XD, 8XD, 10XD and every other XD crankbait,” he says. “Some days it’s raining big 3/4- and 1-ounce baits on the Tennessee River. That’s when one of my favorite lures comes into play: a Strike King Sexy Spoon. I’ve used it to win major tournaments in my career. I’ll often go in behind anglers working the ledges and make long casts with that spoon tied to 17- to 20-pound line. I’ll pop the spoon, pull it off the bottom and let it drop back down with a shimmying action. That presentation really catches a lot of those pressured fish.”

Of course, vertical jigging with a spoon – a classic presentation – is a standard, too, in the Rose repertoire.

“The reason so many of us vertical jig a spoon is because it is just an awfully good way to catch them,” he says with a shrug. “I admit that it’s the technique that I use the most with a spoon.”

Rose’s love of jigging spoons, coupled with his confidence that he could do this bait category one better, led him to design the Lil’ Ledge Spoon for Strike King.

The bait features three-dimensional curvature, bulging to its widest dimension in the center of the bait while sporting a curve in its profile as well.

How did he come up with the design?

“You start bending spoons, (studying) the fall, and you find something that works,” he says. “The S bend in the design gives it a lot of good action. Is it the greatest thing? I don’t know, but I’ve just caught a lot of fish with it. That’s something in itself. If it catches fish, it’s a good bend.”

Break Out of the Old Mindset

Rose will experiment with his retrieve at times, always on the alert for some subtlety that will trigger a strike. But he warns anglers not to overlook the obvious.

“Believe it or not, I often just cast a spoon and wind it back,” he says. “Bass will just knock slack in your line busting to eat it.”

He’s convinced more anglers would put jigging spoons to deadly usage if they could only shake the “cold water, vertical jig” mindset.

“I can’t emphasize enough the variety of applications of the jigging spoon beyond that bread-and-butter vertical ‘drop and jig’ method that’s so effective,” he says. “Try it in other ways. Trust me. It will help you catch more fish.”