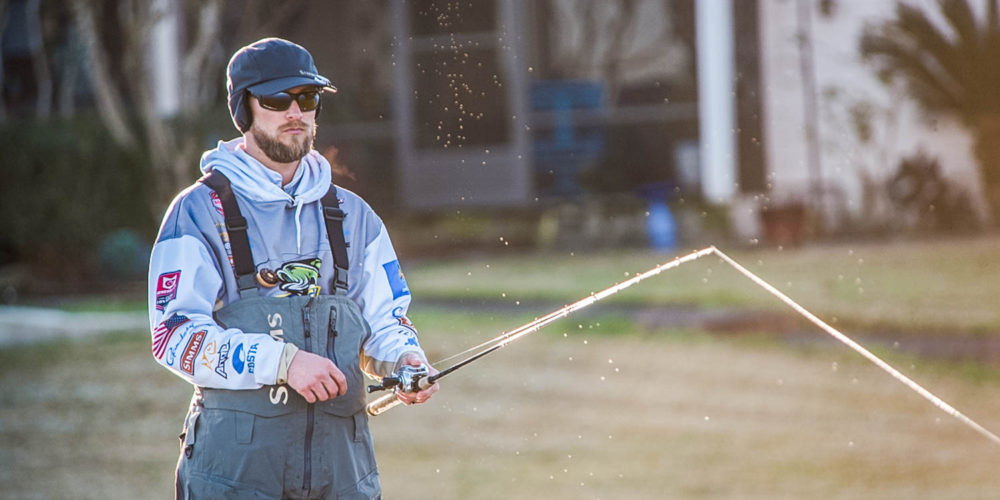 TULSA, Okla. – Through two Stages of the 2019 Major League Fishing Bass Pro Tour, the weather has been a factor in the fishing, and in the outcome of both events. Late-winter cold fronts in both Florida and Texas have resulted in low air temperatures and low water temperatures, forcing many anglers in the 80-man field to adjust their game plans.

One of those anglers is Oklahoma pro James Elam.

“I’ve fished a lot of tournaments when the weather has been cold like it’s been during our first two events,” Elam said. “I know what to do, it’s just a matter of finding the fish. It’s simple in terms of what baits you use, but you’re more worried about where you’re throwing instead of what you’re throwing.”

During his days on the Kissimmee Chain and Lake Conroe, Elam knew ahead of time that the weather would likely be colder than normal. With water temps barely reaching the low 60s in Florida and hovering in the mid to upper 50s for most of the week in Texas, Elam already had his strategy planned out by the time he hit the water.

“I tried to key in on shallow water,” Elam divulged. “You have to do a lot of moving and looking around for the right area to be in when it’s cold. Sometimes you stumble into the right area where something good is happening, whether that be a patch of warmer water or a group of fish that has been flushed up. That’s the stuff I look for.”

One key characteristic of Lake Conroe that played a role in the fishery’s fluctuating water temperatures was its depth (or lack of it). Elam knew that once the sun started to peek through the clouds, it wouldn’t take long for Conroe to start to heat up a couple of degrees and improve the bite.

“Since Lake Conroe is such a shallow lake, those fish respond rather quickly to warming trends,” he said. “Once the water got above 60 degrees and the fish started to think about spawning, that’s when it really started to pick up. On the other side (of the coin), the bite can also slow down pretty quick when it gets cold because of the shallow depths.”

Fishing for a Reaction

“In a post-frontal (situation), the fish may not be in an eating mood so you’re just making them swipe at the bait, kind of like a cat does to a laser pointer,” Elam said.

While tournament fishing in the middle of winter for smallmouth and largemouth is not his first choice, locating and coaxing fish to bite in cold water on his off time is one of his passions. When he’s not competing, Elam spends plenty of time in the late winter hunting for the right combination of conditions.

“I love to fish for spotted bass in the middle of the winter in clear water,” Elam said. “I love to fish highland reservoirs when it’s cold as well. When we get stained, dirty and high water when it’s cold, it’s tough. I really feel like I just have to wait it out for the warming trend and keep moving.”

Elam and the rest of the MLF Bass Pro Tour field continue their season with the Favorite Fishing Stage Three Presented by Evinrude from Raleigh, North Carolina on March 26.