MLF Pros Slow Down with Kayak Fishing in Offseason 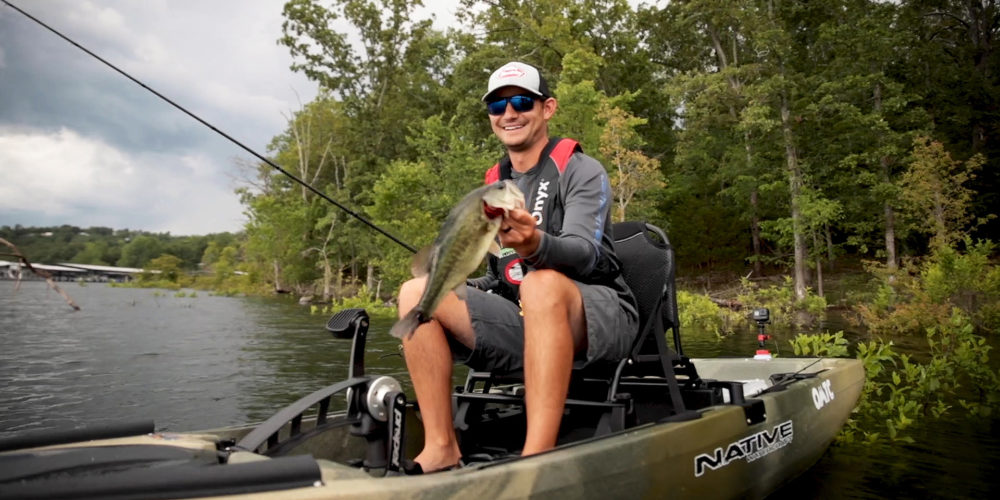 When you think of the pace that the pros on the Bass Pro Tour fish – running from place to place all day long, topping out at around 75 miles per hour – you might not be surprised to know that a few of them like to slow down in the offseason. Jason Lambert, Jordan Lee and Justin Lucas are all kayak fishing enthusiasts, and have been for a few years now.

Back to Your Roots

Lambert and Lee are part of the team at Native Kayak, and have discovered that kayak fishing has brought them back to the things that stoked their passion for fishing in the first place.

“It’s a lot like getting back to your roots,” Lambert said. “It’s less complicated and less stressful than fishing a Bass Pro Tour event. It’s fun to go out and fish without having it really matter or being like work.”

“I started fishing on small boats like kayaks when I was a kid and it’s what I grew up on,” Lee reminisced. “It’s something nice to do in the off time for me and my wife, Kristen. We can take them out on the water and mess around with them for a few hours and just really take it easy.”

Cooling Down in a Kayak

For Lucas, what initially piqued his interest in kayak fishing was the opportunity to beat the heat of an Alabama day in July.

“What first interested me was going down a shady river in the heat of the summer instead of being in the middle of a lake with the sun beating down on you,” Lucas explained. “I was way more comfortable fishing on a kayak in the summer than a bass boat. I don’t like to do it competitively, it’s purely about fun for me.”

All three pros have spent plenty of hours on their kayaks in search of big bass. With all that time on the water, they each picked up on a few tips to make the most out of their time on a kayak.

“When you’re fishing around the shoreline in a kayak you can skip your bait really well,” Lambert tipped. “It’s easier because you’re down lower to the water. When we were down at Lake Chickamauga, I was able to catch a pretty nice fish on a small pond that I never would have been able to get a bass boat in.”

“There’s just something about being out there on the water and only being able to fish what’s in front of you that appeals to me,” Lee divulged. “You can’t run 20 miles in a kayak like you can in a bass boat, so you really have to be slow and methodical to pick an area apart.”

That sentiment is one that Lucas agrees with wholeheartedly.

“I really like to use the kayak to get back into small creeks and rivers that don’t get much pressure,” Lucas said. “There’s fish back there that have never seen baits in their lives so they’re aggressive and bite it. I use any bait that I would normally use on a bass boat, I just have to work it slower.”