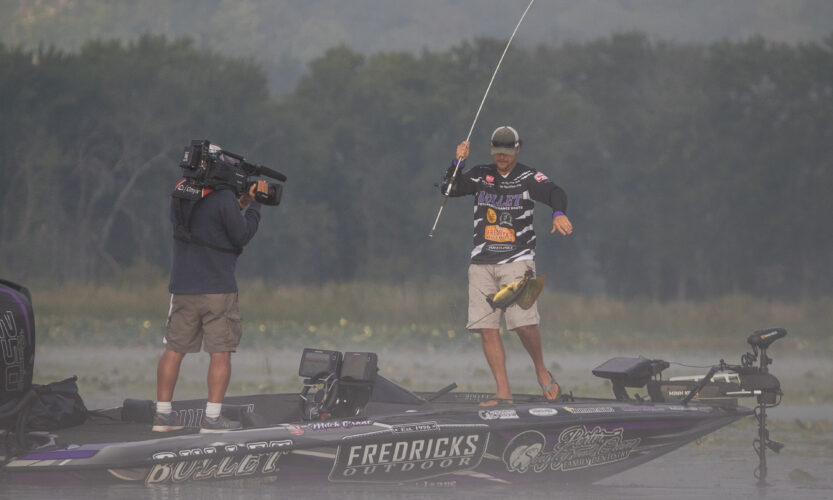 Mitch Crane knocked out a pair of Top 10 finishes on the Tackle Warehouse Pro Circuit in 2021 and both came at least in part thanks to a frog. The first was in the spring at Lake Eufaula, and the second came in the Tackle Warehouse TITLE on the Mississippi River, when he contended for the win until the final day. One of the more dedicated froggers on tour, Crane has a few modifications he likes to make to every frog he throws. Some are standard – others are a little sneakier.

Getting a frog to walk very well is Crane’s specialty and the basis of some of his best modifications, which revolve around strategically modifying the legs.

“The legs are like dragging a parachute behind the frog, the amount of legs you have affects the action you can get from your frog,” Crane says. “The heavier the legs are, the less side to side walking action you can get. When I’m walking one, my goal is to make it walk like a Zara Spook – big, long, wide walks, if I’m fishing open water.”

Typically, Crane starts by trimming the legs shorter, usually snipping off about an inch or so, so the legs are around 2-inches long. Then, he thins the legs by snipping out any bright-colored strands the frog has and trimming at least three or four strands on each side right off at the base.

“You can cut one leg shorter than the other to make it walk, but if you thin the legs out, it makes the frog sit flat in the water,” Crane explains. “That’s the whole key to a bait walking. I’ve thrown Zara Spooks my whole life, and you get one every once in a while, that sits really flat in the water and is special and they’ll eat the paint off it. You can do your frog the same way, you get that thing to sit flat, and when it does, it doesn’t take on as much water and it works incredibly good.”

Progressively thinning and shortening the legs of a frog allows Crane to get the best walking action out of it that he can, which is what he likes to do to trigger bites.

“It’s extremely hard to make a frog walk side to side,” Crane says. “You’ve got to have two things:  you need to thin the legs out, and you need to walk the frog with more slack line than you think you need to. It’s the same premise as a jerkbait, if your line is too tight and you’re working a jerkbait, you don’t get the action you could get from it. You have to have the slack just right, and generally, you need more slack than you think you do.”

Over the years, Crane has picked up a bunch of other little tricks to make his frog fishing more productive.

For a frogging setup, Crane has gravitated toward one that is perfect for him. For a reel, he goes with a wide-spool Lew’s Super Duty for super long casts. For a rod, he likes two Daiwa Tatula Elite rods designed by Ish Monroe. Most of the time, he uses the 7-foot, 4-inch model, and he goes up to the 7-foot, 9-inch model for heavy mats. For his line, he relies on Sufix 832 in either 50-pound or 65-pound-test.

On the frog side of things, Crane throws a SPRO Bronzeye Poppin’ Frog 60 about 95 percent of the time, only going away from the popping model is really heavy vegetation. Then, he goes to a SPRO Bronzeye Frog 65 to get the job done. One thing he doesn’t do much is change frogs – if he wants a different look, he usually goes to one of the myriad colors SPRO offers instead of a different model.

Of course, he still has a staple color.