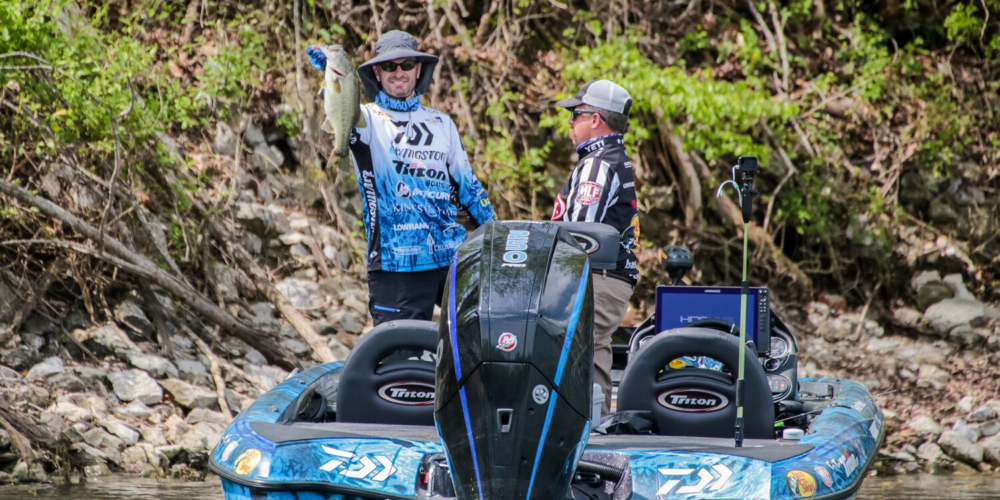 The first couple of cold fronts have found their way to most of the country, which means that many anglers are already well into fall fishing mode. As the grass begins to die off in your favorite local reservoir and the trees begin to look barren, you may find yourself trying to locate transitioning fall bass.

MLF pro Randy Howell is all too familiar with the difficulties of honing in on the bass come fall.

“Fishing gets tough in most reservoirs when fall comes around,” Howell confirmed. “A lot of the fish start to leave the deeper waters and head out to follow the bait fish when the bait fish move shallow. Because of that, the bass start suspending, so they get harder to target and harder to catch.”

Looks Can Be Deceiving

Howell points anglers toward the creeks of their local lakes as a good starting point in the fall. But instead of casting topwater baits at obvious shoreline cover, the Alabama pro really enjoys using a squarebill crankbait more. Howell says that one of the biggest mistakes anglers make in the fall is not paying attention to what may be behind them.

“A lot of times, bass fisherman are drawn to something that looks good to the eye like a shallow dock or a fallen tree,” Howell explained. “Everyone loves to fish those kinds of cover, and I think they’re great things to target as well. However, with everyone fishing those types of areas, they may not be as good after a while. A lot of the fish that get overlooked are behind your boat and in the middle of the creek you’re fishing.”

Sure Bites with a Squarebill

A Livingston Lures Howeller Squarebill is Howell’s go-to bait when fishing away from the bank in a back-end creek. He usually throws a squarebill on a 7-foot Daiwa Tatula Elite Series medium-light rod paired with a Daiwa Tatula Elite baitcasting reel. He prefers 14-pound Gamma fluorocarbon to keep his bait from diving too deep, and for the line’s abrasion resistance.

Howell targets shallow offshore flats with the squarebill instead of the standard list of stumps, rocks or trees. He says that if you can find a sandbar with bait, bass will frequently hover around or suspend beneath the bait.

And while you may not see any obvious cover out in open water, Howell says to trust the process. Just remember that where there’s bait, there’s sure to be bass.

“I cover a lot of water throwing at what looks like absolutely nothing,” Howell said. “There might not be anything out there but a sandy or muddy bottom, and you’re cranking your bait fast. If you see the bait near the surface, that’s where you’ll find the bass suspended underneath them. Remember, though, that it’s important to make really long casts and to try and get your bait as far away from the boat as possible so that you don’t run up too close.”