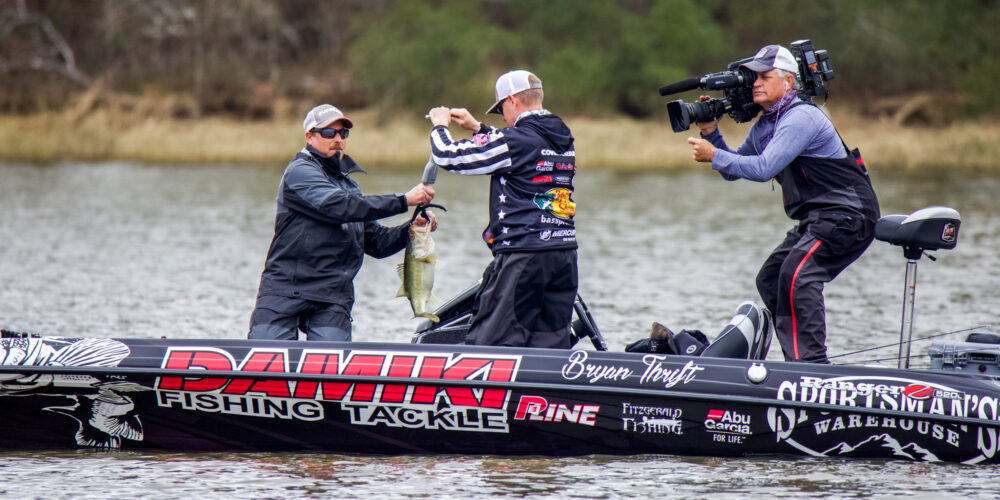 North Carolina pro Bryan Thrift breaks down why he believes the winter transition is the best time of year to throw a topwater. Photo by Jesse Schultz
December 11, 2020 • Mike Pehanich • Cup Events

With winter only weeks away, topwater lures tend to get little play on waters north to south.

For MLF pro and 2019 Forrest Wood Cup champ Bryan Thrift, however, the prospect of drawing surface strikes from bass in the late season is cause for excitement.

Thrift follows two trains of thought in formulating his late-season topwater strategies. The first is a “covering the water” bite with fast-moving lures like a buzzbait or a plopper-style lure. The second involves a more patient approach, presenting topwater lures to schooling fish locked in on a baitfish concentration.

The dividing line for those two bites is water temperature.

“In my region of the country, the Carolinas, the last 60-degree water temperatures is your last opportunity for a topwater bite as far as the moving bait pattern goes,” says Thrift. “The schooling fish bite will progress further along because it’s not temperature dependent. It’s bait dependent!”

Thrift has taken schooling bass on topwater lures in December and January with water temperatures in the low- to mid-50 range.

Thrift thrills to this late-season opportunity, calling it his “perfect topwater bite.” He revels in the speed, excitement and unpredictability of putting a big, churning topwater bait in front of as many big fish as possible.

“The cool thing about this approach is that you can get a bite at any portion of the cast — right against the bank, on a straight stretch of rip-rap, or right beside the boat just before you lift the lure out of the water. You’re after fish that don’t really have a home. They are just up feeding, being opportunistic during that last warm water spell before the frost.”

Bait-oriented bass in late season are apt to locate over brush piles or some type of cover or structural element or corral bait in pockets or portions of creek arms.

“You pretty much have two groups of fish,” says Thrift. “The first group stays on the main lake — on points, humps, maybe main lake grass. The other group of fish follows shad or other baitfish into pockets, creek arms, things like that.”

“You can’t eliminate any portion of the lake,” says Thrift. “You have to move around and look into all the nooks and crannies to find that group of baitfish and the group of bass schooling on it.”

Finding the fish can be tough, but the payoff can be huge.

“Once you find them, it can really be fun,” says Thrift. “Often you can park and catch fish for two or three hours. The key then becomes figuring out what type of presentation and type of bait it takes to catch them.”

Scaling it All Down

More often than not, Thrift’s answer in the winter is a smaller popper/chugger-style bait or compact propeller bait.

“If I find a group of bass in the back of a pocket in 3 feet or so of water, my ‘go-to’ bait is a Damiki D Pop (70),” he says. “It’s a small Pop-R-style topwater bait. I can more or less work it in place and make those fish commit to it. They have the bait corralled.  They won’t leave because the bait is there. You just need to force them to bite.”

Smaller topwater like the aforementioned Damiki D Pop or even an “old school” bait like the Heddon Tiny Torpedo are proven producers in this late season, primarily because the bass are targeting young shad, often threadfin, hatched earlier that season.

To dial in on the most effective presentation, he first tries to determine whether the fish are using any cover or structural elements in the area or if they’re strictly relating to the school of bait itself.

“If I see fish busting bait in a pocket, a lot of the time the easier bites will be concentrated around cover — say a laydown or a shallow dock, something like that,” he says.

Given his druthers, however, he’ll take the bite of bass randomly feeding on a heavy baitfish concentration.

“At times, they aren’t on structure but just in the middle of the pocket or following the creek channel, feeding on shad on a 3- or 4-foot-deep flat in the middle of nowhere,” he says, breaking into a grin. “That’s the ‘funnest’  bite because you don’t have a target. You’re just fishing aimlessly and getting bit everywhere!”