Why the Carolina Rig is Always on Mark Rose’s Deck (and Should Be on Yours, Too) 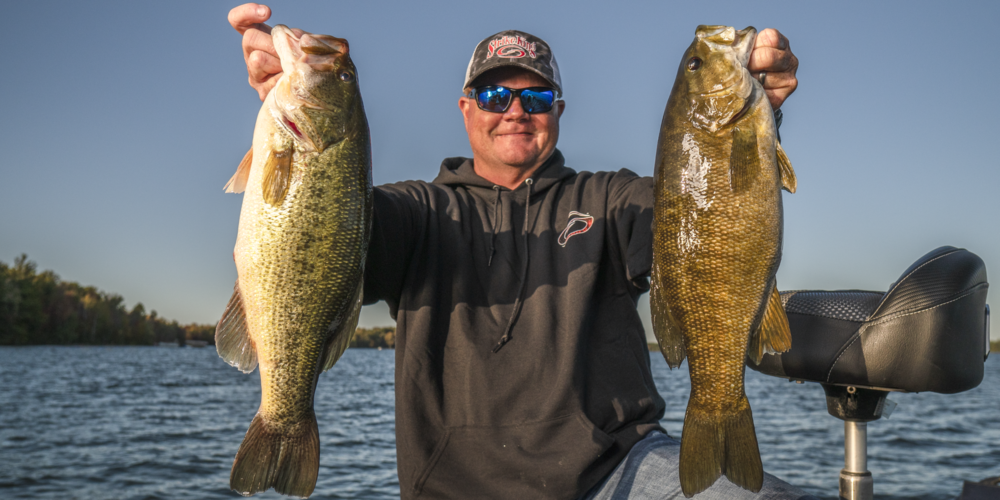 On the one hand, heavy jig-borne plastics cast far and enable anglers to cover water and better interpret the bottom type the bait traverses. On the other, fish hold on longer to lighter baits and blow them out less quickly than they do with soft plastics anchored to heavy weights or jigs.

Which way to go? Choose one or the other…

If you’re like Mark Rose, you opt for the Carolina rig and get the benefits of both.

Never mind the winds of fashion, which shuffle the Carolina rig through a lost-and-found cycle every few years. For MLF standout Rose, the Carolina rig is a staple, a rigging option that offers advantages anglers too often overlook.

The Case for Carolina

“If I were throwing a 3/4-ounce weight in front of this pegged (Strike King) Rage Menace, the fish would feel it,” says Rose, demonstrating how line slides through the cylindrical weight with a Texas-rigged Menace. “But the great thing about the Carolina rig is that when the fish is pulling the bait, he never feels that weight. He can pull on it until I feel him at my rod tip, yet he won’t feel this 3/4- to 1-ounce weight. That enables me to get the weight down, even in high winds, and really feel the bottom.”

Rose stresses that the rig addresses two critical concerns: getting the bait down and keeping biting fish unawares.

“I’m using that heavy weight to be efficient and effective in getting the bait down,” he says. “But what I really love about the Carolina rig is a bass can take off with the bait and think he’s got it. He won’t feel anything until I feel that subtle touch at my rod tip.”

Don’t expect a telltale “tick,” the kind you feel when flipping a jig alongside a dock, Rose warns. Often the only sign that a bass has taken a Carolina-rigged plastic is mushy resistance.

“The fish just loads up on it,” he explains. “He’s not jerking. He’s moving. He’s just pulling.”

Once schooled and experienced in the technique, however, your hook-up ratio will soar, Rose maintains. He likens his Carolina-rig hookset to the one he uses with a swimbait. Quick hooksets are no-no’s. The lengthy leader trailing the sliding weight can become a liability. A snap-strike will throw slack into the line, alerting the fish that something’s not right and providing a chance to disengage.

“You’re just loading up on them,” he says. “You don’t have to jerk like when you’re flipping a Rage Bug and the fish feels the weight, the resistance. They don’t spit it out like that with the Carolina rig. Once they load up on it, you just lean into the fish. If he feels a little bit of resistance, that just seems to make him want to grab ahold of it more. He just wants to hold on, not let it get away.”

Rose stresses the importance of employing a rod with backbone as well as length to execute those long sweeping hooksets. That was a key consideration when he designed the Carolina Rig Casting Rod (7 feet, 4 1/5 inches, medium-heavy power, moderate-fast action) for the Mark Rose Ledge Casting Rod series, part of the Lew’s Custom Pro lineup.

“It’s got the perfect action for loading and casting rigs with a 1/2- to 1-ounce weight,” he says. “You need butt strength to drive that hook home, but you need tip action to cast a 1/2-ounce weight as well.”

Rose utilizes a shoulder-width Carolina-rig leader for most conditions he encounters, adding several inches when he ties to accommodate the dog-ears he’ll trim from his knot. Hook-up ratio diminishes with a longer leader because you’re setting the hook through a 3/4- to 1-ounce weight and have more line to straighten before the hook can catch bass flesh and penetrate. Still, he’ll lengthen his leader if conditions so dictate.

“If the water is very clear, I’ll use a longer leader,” he says. “On the other hand, if the water is a little more stained and the fish are homing in on the sound of the weight hitting on the rocks, I will use a shorter leader.”

The higher hook-up ratio with the shorter leader makes it tempting, but experience validates the value of a longer leader in gin-clear water. His standard leader length splits the difference.

“After all these years I’ve found that the shoulder-width stretch of leader is a very effective length,” he says. “It gets the bait away from the weight enough to look like it’s off by itself. Yet it’s short enough to get a good hookset.”

Rose loves the versatility of the long-tail rig, but he has no qualms about downsizing his tackle – from rod butt to bait, if necessary – even if it means swapping his standard baitcasting setup for spinning gear and cutting terminal tackle to the barest of basics.

Blame the football jig for part of the Carolina rig’s fade from popularity. The two techniques routinely employ 1/2- to 1-ounce-plus delivery systems to get soft plastic craws, beavers, creatures and other soft plastics to bass that are down and distant.

Both factor into Rose’s offshore arsenal, frequently compelling him to choose between them. More often than not, size matters.

“Any time I’m fishing offshore and want a really big profile bait – crawfish or bluegill mainly – I want a football jig,” he says. “I can bulk it up. I want it on the bottom. I want it hitting on the mussels or the gravel, staying on the bottom just as (the weight of) a Carolina rig would.

“But a lot of times with the Carolina rig, I downsize my profile, and that is often the deciding factor for my decision on which to use. It’s my choice if I want to throw something really compact that bass can eat really well, though I will throw (Strike King) Game Hawgs and big creature baits like that on it, too.”

Rose acknowledges that both presentations are often applicable to similar sets of conditions. But if he senses a need for subtlety, as with pressured fish or bass in a neutral mood, for example, he will invariably reach for the Carolina rig.

“The thing about the Carolina rig is it allows that bait to float,” he says. “Whenever they bite it, it’s subtle. If I think the bite is at its toughest, I will go with a Carolina rig because the bass won’t feel you. A football jig is great if the fish are aggressive. If I feel offshore bass will eat whatever I throw down there, I will always go with the football jig. I can bulk it up. It has a bigger hook and may catch a bigger fish. But I like them both!”

Many soft plastic baits perform well at the back end of a Carolina rig, but his favorites are clear.

“If I had to narrow to one, it would be between a Strike King Rage Bug or a (Strike King Rage) Menace,” says Rose, who carries a 100-bag of both green pumpkin and black & blue varieties of the latter. “The Menace is an awfully good Carolina rig bait. It sits back of the leader, and its tail kicks. But one of those two versatile baits will usually accomplish whatever I need my soft plastic to do.”

For Mark Rose, this deadly rig will always rise above trend or fashion.

“I always have a Carolina-rigged rod on the deck of my boat,” he says. “Always!”