Why the Wakebait? Three Pros Share Their Keys to Wakebait Success 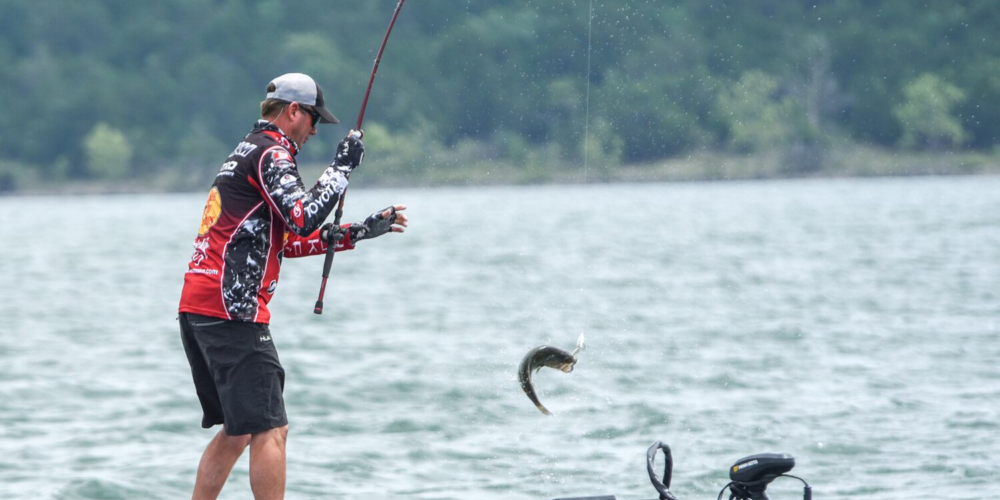 MLF Bass Pro Tour Stage Seven from Table Rock Lake is in the rearview mirror now, but we would be remiss if we didn’t stop for a second and appreciate one of the most talked-about baits of the event: the wakebait. A handful of MLF pros capitalized on this style of topwater, while it went under-utilized by a majority of the field.

Scott Suggs used a Berkley Surge Shad Wake Bait to carry him to the Championship Round and a seventh-place finish during Stage Seven. The Arkansas pro says that the clear water of Table Rock Lake and the weather conditions help make the wakebait more effective.

“I like to use a wakebait when it’s overcast skies and there’s just a very fine ripple on the water,” Suggs explained. “I want to break up the surface a little bit, but not too much. In those conditions, you can really get the best action out the bait and the hookups are even greater.”

MLF pro John Murray agrees with Suggs, as he rode the wakebait wave to a Top-40 finish in Stage Seven. The Tennessee pro says that the overcast and windy conditions for the majority of the week in the Ozarks – combined with the time of year – made it a no-brainer to reach for a wakebait.

“I learned a while ago that during the post-spawn period, wakebaits work really well in the Ozarks area of the country,” Murray detailed. “If you get the right conditions, that V-pattern ripple it creates will just pull the bass up from about 20 feet of water. The fish just don’t seem to recognize it as quickly as they do other baits.”

Kevin VanDam was able to use a Strike King Wake Shad jointed wakebait to clinch his first Top-10 finish of the season. He says he used a variety of colors like Sexy Shad, Oyster, Green Gizzard and Blue Gizzard to get the fish to bite.

“It’s good to have a variety because if it’s cloudy the brighter colors do better but when it’s sunny it seems the more natural colors do better,” VanDam outlined. “When you get a little bit of wind and some clouds it makes a big difference. As soon as it starts to get sunny and calm, those fish just go down deep and they just won’t commit to the bait like they would with clouds and wind.”

VanDam says when he preps his tackle for a day of wakebaiting just as he would for a day of throwing a crankbait.

“I throw my wakebait on the same set up that I would throw a squarebill crankbait,” VanDam confirmed. “I use a 7-foot medium Quantum Tour KVD Composite Cranking rod with 17-pound Bass Pro Shops XPS fluorocarbon. When it comes to the reel, you can use whatever, just make sure you reel the bait in slowly.”

Suggs reaches for a 7-foot medium-heavy Abu Garcia Veracity rod with an Abu Garcia Revo Premier baitcasting reel when he throws his wakebait. But when it comes to what type of line to spool, he has a definite preference.

“I have buddies that throw this bait on braided line but I throw it on monofilament,” Suggs said. “You really want your line to float, but you also want it to absorb some of the shock when the fish blow up on it and get it.”

For Murray, he’s all in on monofilament when using a wakebait, but he goes for a little more length in his set up.

“I use a 7-foot-6 Glass Enigma rod with an Enigma baitcasting reel,” Murray revealed. “I like using 12-pound monofilament line because it works best for me in clear water like we had at Table Rock. You have to make sure you have the correct casting distance because I did a lot of casting at fish that were coming at me.”

When it comes to perfecting your wakebait retrieve, all three pros agree that slower is better. They say whether you’re reeling in a jointed or regular wakebait, patience is key for getting the best bites.

“The key is maximizing your distance when you’re casting,” Murray said. “If you can’t cast the bait accurately, it’s kind of a waste of time. You have to make sure that you can put it right on top of those fish.”

VanDam says that paying close attention to your surroundings as well as your electronics can be a major factor when looking where to throw your wake bait.

“A big part of what I was doing on Table Rock Lake was looking at my Humminbird 360 for pods of shad or trees,” VanDam said. “I keep an eye on my electronics because I could tell within a minute or two of pulling up to a point if there was bait present, then I was going to get a bite. It’s a good pattern to run-and-gun and to go where the wind is blowing. The main thing is that you have to have water clarity. The clearer the water the better the fishing is going to be.”