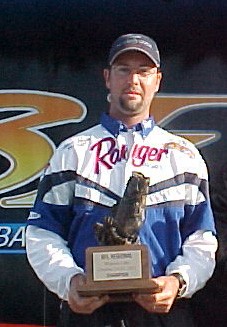 After qualifying for four consecutive All-Americans, winning would be sweet

Anyone who follows the ranks of pro bass fishing has surely heard of “The Zone.” It’s that mysterious winning niche for which tournament anglers are constantly searching, but only a handful ever find.

Bass fishing greats like Clark Wendlandt, Kevin VanDam and Denny Brauer have found “The Zone” on more than one occasion. David Fritts, Larry Nixon and Takahiro Omori have been there a time or two as well.

It would be misleading to say 27-year-old Allan Cagle has entered that revered state in bass fishing where mistakes don’t exist and every move seems to hatch into a golden opportunity laced with thousands of dollars worth of lunkers. But only a fool would rule out the possibility of the gritty angler cracking the code sometime down the road. Cagle’s track record is way too impressive, and he has an equally competitive attitude to go along with it.

A regular in the Wal-Mart Bass Fishing League’s Gator Division, Cagle is in a pretty admirable position these days. He’s perfectly content with his life, both on and off the water. So content, in fact, that he believes he could lay down his flipping sticks and sell his Ranger boat tomorrow and still not have any regrets about cutting short what has thus far been a fairy tale tournament fishing career.

“I’m absolutely tickled to death with what I’ve been able to accomplish with my tournament fishing so far,” Cagle said. “I average working 60 to 70 hours per week, and I only get to fish on the weekends. Yet I’ve still managed to do well. If for some reason I wasn’t able to fish anymore, I could always look back and be perfectly satisfied with what I’ve accomplished in the short time I’ve been doing it.”

Cagle’s BFL resume reads more like that of a salty veteran rather than a mere youngster with just a few seasons under his belt. He’s already competed in three Wal-Mart BFL All-Americans as a boater and is set to make his fourth appearance in June when FLW Outdoors takes the All-American to 8,600-acre Cross Lake in Shreveport, La.

Qualifying for four consecutive All-Americans is a lofty accomplishment in itself, especially when considering that Cagle has been competing among the BFL ranks for only four seasons.

“He’s in an elite group, probably one all to his own,” said Ron Lappin, BFL tournament director. “Allan has accomplished more in four years than many anglers manage to accomplish in a lifetime of tournament fishing. He’s a class act as a fisherman and a person. He’s got an awful lot going for him.”

Among other things, Cagle is consistent – extremely consistent.

While he has never been one to catch heavyweight sacks of bass, Cagle generally shows up at a weigh-in with a respectable limit to show for his daily efforts, often when his colleagues are struggling to put something together.

“I think that’s been the main key to my success so far,” Cagle said. “I don’t catch a lot of big fish, but I’m usually able to put a limit together wherever I am. All four of the regional qualifying events I’ve fished have been low-weight tournaments where the fishing has been tough. I’ve always managed to do well when the fishing gets tough, and it’s paid off.”

Cagle earned his most recent trip to the All-American following a stellar performance at the BFL Regional held last October on South Carolina’s Lake Wateree. He advanced to the finals with a two-day total of 17 pounds, 9 ounces then walked away with the championship round with an 11-pound, 6-ounce limit – 7 pounds heavier than the nearest competitor.

The win at Wateree has no doubt been the highlight of Cagle’s career thus far. But not just because it paid off with a $50,000 first-place prize package plus $1,000 in Ranger Cup incentive funds. Cagle won the tournament on a black/blue Terminator jig, a lure he’d never tied on prior to the high-stakes regional showdown.

“I’ve always thought of myself as being a versatile fisherman,” Cagle said. “But I’d never fished a jig before until the Wateree regional. Winning with a bait I had no experience with was neat. It also was cool knowing my wife, Mira, was following along behind me on the way home from South Carolina in the new Chevrolet pickup I’d just won.”

While Cagle has been a regular on the BFL circuit for only a short time, he developed his knack for catching bass years ago as a kid growing up on the Winter Haven Chain of Lakes in central Florida.

The chain comprises a series of shallow lakes, which at the time didn’t contain much aquatic vegetation to speak of. But the lack of weeds wasn’t a bad thing. To the contrary, it may have been a blessing. Cagle developed a degree of versatility many grass-fishing Floridians may lack.

“I grew up throwing a crankbait and a Carolina Rig to brush piles, which was unique for Florida fishing,” Cagle said. “It helped me develop a good foundation for structure fishing that a lot of other anglers from this part of the country may not have.”

As Cagle matured, he began setting his sights on other lakes and other fishing venues. He fished his first club tournament at 12 and progressed to the B.A.S.S. Federation ranks at 19. He went on to dominate the Winter Haven Bassmaster points standings for three consecutive years. From there, he joined the Wal-Mart Bass Fishing League’s Gator Division, where he is considered by many to be as much a sportsman on the water as he is an iron man at the weigh-in.

Shift to Lake Okeechobee in southern Florida, site of the first Gator Division tournament of 2002. Cagle and his co-angler, Tom Hamilton of Sarasota, Fla., motored through 4-foot swells for a solid hour to get to their first fishing hole on the opposite side of the lake.

Not long into the morning, Cagle developed excruciating pains in his lower abdomen. He didn’t know it at the time, but his body was attempting to pass kidney stones – a losing proposition that’ll bring even the toughest of men to their knees. In the meantime, Hamilton proceeded to put three solid bass in the boat.

“I was hurting bad,” Cagle said. “It got to the point that all I could think about was letting Tom run the trolling motor while I curled up in the bottom of the boat. But I couldn’t do it, because the tournament rules say the co-angler has to stay in the back of the boat.”

By 11 a.m. the pain had become nearly unbearable. The two anglers discussed their options and agreed that the most sensible thing for Cagle to do was contact his wife via cell phone and have her bring his boat trailer to Okeetantie Recreation Area.

Not long after Cagle made the call, Hamilton landed an 8-pound kicker fish bound to increase his chances at the weigh-in. That forced Cagle to make a second call, this one to Lappin to brief him on their predicament. The tournament director was sympathetic about the situation, but explained that if Cagle put the boat on the trailer, both he and Hamilton would be disqualified from the tournament.

“There was no way I was going to let that happen,” Cagle said. “He (Hamilton) paid his money just like I did and I hated to see him lose his fish. I knew right then that I had to drive him back.”

When he docked his boat at Roland Martin’s Marina in Clewiston an hour later, Cagle and his wife hurried to the hospital while Hamilton went to weigh-in and collected $750 for his third-place sack. He pocketed an additional $500 for catching the big bass on the co-angler side.

A number of industry leaders including Ranger Boats, Terminator Lures, Culprit Worms, Garmin Electronics and Turbo Props have taken a liking to the blue-collar worker from Winter Haven, Fla., and have rewarded him with products and paychecks to help fund his habit.

That in itself has been overwhelming to Cagle, who considers himself nothing more than an average guy who lives life day-to-day and doesn’t look into the future too much as far as goals or beefy aspirations.

“I just like to bass fish,” he said. “When I got into the BFL, I never dreamed that I would be able to put together the list of sponsors that I have right now.

“Don’t get me wrong,” he added. “I’d like to move on to bigger and better things (like EverStart and FLW Tour). But right now I’m perfectly happy with where I am. I’m having fun.”