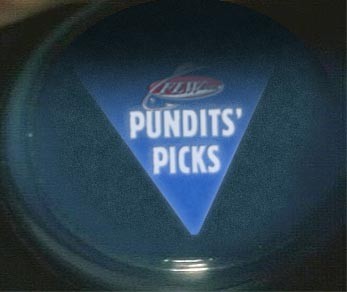 Here we go, off to another illustrious season of Pundits' Picks, except this year there is a bit of a twist. Four REAL professional anglers are going to join in the melee. Clark Wendlandt, Koby Kreiger, Gerald Swindle and Randy Blaukat are picking anglers for the record in an attempt to overthrow the original four pundits.

Just the thought of these guys picking anglers makes us chuckle. We fear they might not know exactly what they've gotten themselves into.

For one, Wendlandt and Swindle might be inclined to pick themselves in every event. Just watch. If they think fishing for a living is high-stress, wait until they pick themselves to win an FLW tournament in front of thousands of Fishing Challenge fanatics. Will the added pressure of calling their shots take these guys out of contention?

And as for Blaukat and Kreiger, they might struggle with their picks because, in an attempt to be original, they will refuse to pick certain anglers who they know can catch fish out of a mud puddle. (Try to be as original and creative as you want with your picks, guys, but there is no reinventing the wheel. Some anglers are a factor every time; leave them out of your picks and you will do a face plant in downtown Punditville for the entire world to see.)

Now, the lake. Let's be honest here. The Wal-Mart FLW Tour at Lake Okeechobee is one of the more difficult tournaments to pick. The reason? Every year, a few lesser-known anglers hook into some 10-pound largemouth bass during the opening round and are subsequently propelled into the semifinals. Also, the majority of anglers seem to catch big sacks, which means that 1 or 2 pounds can make the difference between a 20th- and 70th-place finish.

In short, the only consistency over the years on the Big O has been the fact that virtually no angler has been consistent. That is what makes Okeechobee such a great tourney to pick. The possibilities are seemingly endless.

Unfortunately for our pro-angler counterparts who are as yet unschooled in the nuances of professional fishing predictions, the endless possibilities – and possibilities for failure – could make for one long week in South Florida. See, we well-heeled pundits aren't just sore losers, we're even poorer sports when we win.

The gauntlet has been thrown down, pros and punditry fans. Keep on reading to see this month's winning lineups.

1) Koby Kreiger. Over the last three years, Kreiger has been about as consistent as they come. One of the sports most exciting up-and-coming pros on the FLW Tour, Kreiger has finished no worse than 31st place over the past three years at Okeechobee. The “Trailmaster” was great in 2002, including a dramatic win at last year's EverStart Championship, and he's only going to get better in 2003.
2) Jim Tutt. If this Kellogg's pro could fish the majority of the FLW Tour lakes like he does at Lake Okeechobee, the rest of the field would be in trouble. Although King Tutt had a terrible year at the Big O in 2001, he turned in an eighth-place performance in 2002, a 16th-place finish in 2000 and a third-place finish in 1999 – arguably the best performance on said lake in the past four years.
3) Clark Wendlandt. There's not much to say about Clark that hasn't already been said. He's one of the best anglers in the world and he's fishing as well as ever. Even his beloved Dallas Stars are in first place. What else could you ask for? Oh yeah, he has three top-12 finishes and one top-five finish on Lake Okeechobee over the past four years. He'll be there when it counts. Book it.
4) Mickey Bruce. The Buford, Ga., native finished last week's EverStart tournament on the Big O in 13th place. He also posted a 14th-place finish on the FLW Tour at Lake Okeechobee in 2001, a 24th-place finish in 2000 and a 15th-place finish there in 1999. In short, Bruce knows what he's doing on that body of water, he's been consistent, and he's nearly always hanging around the top 20. The only real worry is that Bruce seems to have a hard time cracking into the top 10. Will this be his year? I'm betting that it is.
5) Randy Howell. Howell will be sticking around for the money rounds. He boasts an 11th-place finish in 2002, a 27th-place finish in 2000 and a 25th-place finish in 1999. He's had a year to adjust to the birth of his newborn child, so he should be especially focused in 2003. In sum, Howell has been there before, he knows Okeechobee like the back of his hand, and he is one of the more underrated anglers on the FLW Tour.

1) Steve Daniel. The Big O has changed a bunch since last January. Those that have witnessed its metamorphosis will reign supreme. What a better pick than a veteran guide on Okeechobee?
2) Scott Martin. Ditto on above. Martin is not the veteran guide on the Big O that Daniel is, but Lake Okeechobee is Martin's backyard. Also, Martin is due on the FLW Tour.
3) Koby Kreiger. As much as I hate to pick a pro foe, Kreiger's fishing talent cannot be denied – neither can the hot streak he is on. Last fall Kreiger won a BASS Open in New York, then turned around and won the EverStart Championship on Lake Martin. Thousand Islands and Lake Martin are nowhere near Okeechobee, but sometimes this game is all about momentum. Besides, Kreiger's record on Okeechobee is pretty strong.
4) Gary Klein. Klein owes me big time in these picks. Every time I did not pick him last year, he soared. Every time I did pick him, he bombed. This year I am going to get my points out of Klein, starting with Okeechobee. Klein has been to the Big O a few dozen times over his career and he knows a thing or two about it.
5) Jay Yelas. That's right, call me a yellow-hearted coward. Call me unoriginal. Call me whatever you want, but I am not arguing with an FLW Tour Angler-of-the-Year title AND a Bassmasters Classic victory in the same year. I think Jay has still got the juice and it's going to flow in Florida.

1) Aaron Martens. Strictly a points play to begin the season. Martens has yet to win an FLW, and he has never even top-10ed at Okeechobee. But the California kid has also never finished worse than 30th at FLW Okeechobee. Setting aside one 81st place at the tough-fishing Pascagoula River in 2001, the versatile Martens has never finished worse than 39th at any FLW event he's fished. He's going to anchor my picks this season, and he's hungry for a win.
2) Clark Wendlandt. I'm banking on the fact that he's a much better fisherman than he is a tourney prognosticator. Wendlandt's one of the best in the shallows, and that's the name of the game at the Big O. He's consistently solid there.
3) Jay Yelas. Finished third here last year, will do the same this year. If he can avoid the distractions of success and stay focused on his fishing in 2003, he's versatile enough to be dominant again. Okeechobee will be a good litmus test for Yelas' staying power.
4) Kevin VanDam. No need to worry about the Kalamazoo Killer's staying power. The Tenacious One is always good on any lake at any time of year. He'll battle again for Angler of the Year, but he's going to have to fend off Martens.
5) Chad Grigsby. This one's purely a hunch. Another Michigan native, this FLW pro in his sophomore season is another one of those Northerners who likes to head down where it's warm and scorch these Southern lakes. The numbers he posted in his truncated 2002 rookie season were staggering: He never finished worse than 24th place in three tournaments. This kid knows how to play the game, he's on a roll, and he has confidence to spare. Watch out, Shaw, there's a new Grigsby in town.

1) Scott Martin. By virtue of waiting until the last possible minute to turn in my picks, I know that Martin is primed and ready for Okeechobee. He opened the 2003 EverStart Series Season with a five-bass limit weighing 20 pounds, 15 ounces under less-than-ideal conditions. Enough said.
2) Clark Wendlandt. As much as it pains me since Wendlandt is now a combatant in this game we like to call the Picks, I still have to pick him to be in the top five. After all, the unofficial captain of Team Kellogg's was my best pick last year with a 12th-place finish. He also cracked the top 10 on Okeechobee in 1999 and 2000.
3) Pat Fisher. No angler generates headlines like Fisher. I know this because I see all of the news clips generated each year by FLW Outdoors competitors, and Fisher tops the list, at least among anglers who have yet to earn an FLW Tour victory in the Pro Division. Besides, he has the right name to be a star, and he landed in the FLW Tour top 10 twice last season.
4) Wesley Strader. Last year was by far Strader's best showing as a pro, and I expect him to continue his run in 2003. He earned two FLW Tour top-10 finishes last season, including a win on Lake Ouachita. Cracking the top five on Lake Okeechobee will be sweet for this Fujifilm pro.
5) Kevin VanDam. VanDam has cracked the top five four times in the last two seasons, landing in second three times and third once. One of those second-place showings came on Lake Okeechobee. He is a past Angler-of-the-Year titleholder who is way overdue for a win. I won't concede that to him here, but he is a sure bet to round out the top five.