Down on the bayou 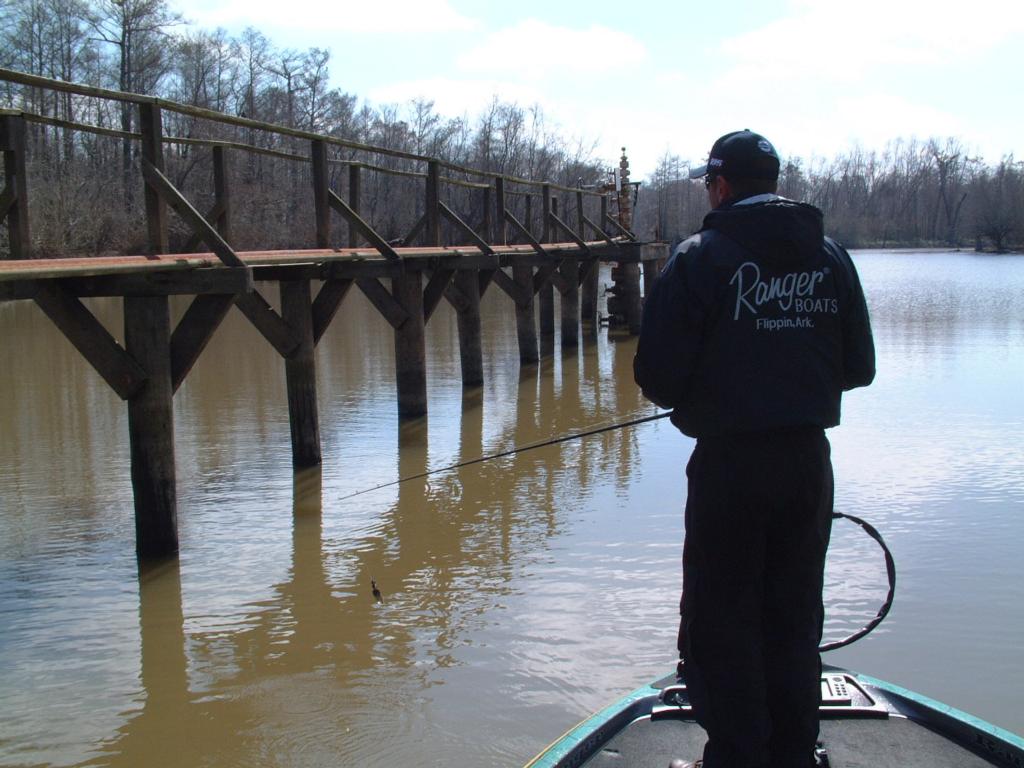 “This place is like a giant sponge where we can drive our boats through the little tiny holes,” describes FLW Tour pro Gerald Swindle.

Additionally, the entire basin is dissected by hundreds of canals cut by oil companies, which creates the “endless watery maze,” that Walker describes.

Walker says that when he put in on the basin a few of days ago, he was armed with only a road atlas. “I got lost – real lost – in about five minutes,” he says. “I went back to the ramp, loaded the boat and went straight to the tackle store to buy maps.”

Maps for the basin are actually aerial photographs. In order for anglers to successfully navigate the basin’s immense maze of canals, these maps are an absolute necessity. The canals are so similar in appearance that following the map is the only way to know where you are. During practice, anglers have spent as much time riding around with maps in their laps as they have fishing.

Despite the Atchafalaya Basin’s complexity, anglers are reporting that bass fishing is good. Much of that is attributed to low water levels. The water levels in the basin appear to be down 3 to 5 feet. That water, which usually inundates the bayous between the canals, is pulled down into the canals, giving anglers a distinct advantage.

The primary cover is shallow wood – stumps and laydowns – along the canal shorelines. In the back of most dead-end canals are “oil heads,” or oil pumps, built on large docks, which also hold bass.

Anglers who have a passion for pitching and flipping shallow wood will think they have died and gone to heaven in the basin. “If I could design my own pond, this is what it would look like,” says Walker pointing to a canal bank. “This is awesome fishing, I just wish I had more time to find fish.”

Trying to find productive fishing areas in such a large network of canals is like trying to find a needle in the veritable haystack.

“The problem is everything looks great,” says Swindle. “I mean every canal looks like it is loaded with fish, but it’s not. So you have to fish on 36-volts-high just to cover an itty bitty portion of water.”

Anglers are primarily keying in on changes in water color to pinpoint fish. The water clarity changes with each canal, so there is some process of elimination. But even then, the challenge of finding fish is monumental.

Swindle and Walker agree that the anglers who have put a lot of time into the basin – at least seven or eight days – will have the upper hand. Both anglers have only had about three days of practice.

“The conditions are right for a fantastic tournament,” says Walker. “The water is low; the weather is warming up; water temperatures are going to get back to the 55-degree mark. Things are right; I think they are going to catch a bunch of fish here.”

Since conditions in the basin are so good, Walker doesn’t look for anglers to have to run far to catch quality bass. “Even though you can run down to Bayou Black or other portions of the (Mississippi) Delta from here, I think there is plenty of water and bass right here in the basin – a guy doesn’t need to go far.”

The official length limit in the tournament will be 14 inches, so limits of chunky basin bass should weigh between 12 and 18 pounds. Top-10 cut predictions are all over the board – from 24 to 30 pounds – indicating that no one is really sure what to expect from the Atchafalaya Basin.

Ruler of the swamp

Many anglers fishing the Atchafalaya Basin this week have spied the real boss of the bayous. The not-so-illusive nutria, which looks like a cross between a huge rat and a beaver, is a common sight in the basin bayous. Louisiana lore has it that Tabasco Hot Sauce founder E.A. McIlhenny imported the animals from Argentina to Avery Island, La., to farm them for the fur trade. A nutria fur market never prospered, and now the overgrown “water rodents” roam the bayous chewing on tree bark.