So you want to be a bass pro? 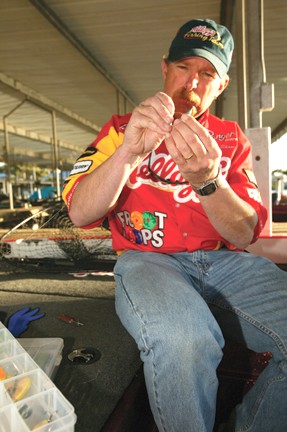 Most of us begin with romantic career ideas. From the time I was in fourth grade, mine was to play for the Detroit Tigers. Somewhere along the line we enter more prosaic occupations, and most of us do well in them with no real career planning involved. But what are the career ideas that get tournament bass anglers into the work they do? When does the notion that they would fish for a living get planted? And what do they do to realize that ambition? A few successful FLW Outdoors anglers tell us the what, when, where and how of planning a career in bass fishing.

Wesley Burnett of Hot Springs, Ark., was the 2002 EverStart Series Central Division Angler of the Year. Burnett started fishing, as many of us did, as a child. He grew up on a river known for catfish. On one of a series of family vacations, while Burnett was wading in the river, his grandmother said, “He’s going to be a fisherman when he grows up.”

Burnett joined a bass-fishing club when he was 12 years old. As he read about bass fishing, his heroes became those anglers whose profiles appeared in magazines and newspapers.

“All my life, that’s what I’ve wanted to do – fish tournaments,” he said. “FLW Outdoors has given me a great opportunity.”

Burnett seized the opportunity as a young man, and it is the only career he has had. In contrast, Alvin Shaw of State Road, N.C., became a professional angler after enjoying success in another career. Indeed, Shaw still works as a self-employed contractor, specializing in private-residence construction. When Shaw completed high school, he started his own company and built it up for 20 years. Half a decade ago, Shaw sold his business interests to devote more time to fishing.

While in business, Shaw fished club tournaments, though he did not have the sort of boat that tournament anglers depend on. Shaw built a house for a man who had purchased one of the boats used in a national championship, and he traded for the boat.

“I began fishing the Wal-Mart Bass Fishing League, and for seven or eight years I did really well,” he said. “When the FLW Tour formed, I thought, `I’ll get into that.'”

Shaw started as a co-angler with the Wal-Mart FLW Tour and jumped to the pro side after posting an eighth-place ranking in the points standings. “This was a calculated risk,” Shaw said. It has paid off, however, as Shaw has finished in the top 20 at the Wal-Mart FLW Tour Championship three times since 1996, finishing fourth in 1999.

While Burnett and Shaw lived in areas of the country where fishing tournaments are prevalent, Western anglers Dean Rojas and Skeet Reese had to wait their turn, all the while dreaming about their own bass-fishing careers.

“Basically, that’s all I wanted to do since I was 13, watching TV shows,” said Rojas, who now lives in Grand Saline, Texas. “What I’ve done is to position myself to do that.”

Reese, who lives in Auburn, Calif., has been a full-time professional angler for six years and has been fishing tournaments for 16 years. He, too, is fulfilling a lifelong dream.

“I’ve always wanted to be a tournament angler for a living since I was 12 years old, but I never knew how,” he said. “I was scared to death. I knew I would either fish tournaments on the side while having a full-time job or commit 100 percent.”

Reese was managing a tackle store in northern California when “big-time” professional tournaments went West. “I had to make a decision,” he said. “I set up a guide service before I quit my job.”

Guiding, however, faded quickly. “I was very fortunate,” he said. “I won five tournaments back-to-back, so I could put some cash away.”

Managing a tournament career is like managing a small business. While anglers do not have inventories to sell, they must manage cash flow, plan travel, maintain equipment and do lots of the other things small businesses owners do to stay in operation.

In order to be successful, it is imperative that anglers manage their affairs and hone the skills they need through a college education or on-the-job training.

Burnett attended Applied Life Christian College in Hot Springs with a plan to become a pastor, ministering to the needs of young people. While there, he was taught a critical skill for the business aspect of tournament anglers – public speaking. Sponsors expect tournament anglers to make presentations, conduct seminars, and look and sound good while doing it.

Shaw had extensive experience in managing his own business before jumping into professional angling. He already knew how to manage money, schedule activities and make disparate pieces of an enterprise fit together. 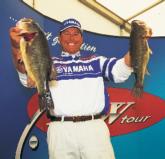 Other anglers, like Rojas, tried the college experience but found that delegating the business duties to someone else is the smartest option for their particular needs. While Rojas attended San Diego State University, he found that he was not much of a student. “I’m a hands-on kind of person, so San Diego State was a waste of time for me,” Rojas said, “though not for my wife. She got a teacher’s degree.”

Rojas added that his wife handles most of the business-related activities for the family. “She does most of the paperwork, the taxes, the accounting, that sort of thing,” he said. “She’s the foundation, and she’s been through it all.”

Like Shaw, Reese also had business experience. His experience, however, was related to fishing. “When I was managing the tackle store, I learned a lot about the industry and marketing,” he said. “I can go to manufacturers and talk business. I can tell them that I can cater to Generation X and appeal to a new marketing group. This is a good way to attract sponsors. The only way to survive in this business is with quality sponsors. There are only half a dozen guys who could survive on their winnings alone. I’m a tournament fisherman, and I need sponsors.”

Reese’s wife, Kim, handles lots of the day-to-day business management. “She’s sort of the business manager,” Reese said. “She does the bookkeeping and accounting. I write down the schedule, where I have to be and when, and she coordinates all that.”

Any profession that requires family members to travel creates stress on relationships. Tournament angling is no exception.

Burnett’s wife travels with him. “I have a camper on the back of my truck,” he said. “We simply live in our camper.”

Shaw’s family circumstances permit him to travel without sacrificing relationships. His children are grown, and his wife has her own job. If Shaw makes the final cut at a tournament, his wife usually flies to the tournament site to offer encouragement.

Rojas met his wife-to-be just as he began tournament fishing. “I told her right off the bat that’s what I wanted to do,” he said. “When I go to tournaments, we load the entire family, including two small boys, into the RV. We all travel together.”

Reese married after starting his full-time tournament career. Consequently, his wife had a pretty good idea of what to expect from the beginning. Furthermore, his wife comes from a family where the breadwinner was a musician. “Kim’s dad traveled all over the world, so she grew up understanding the traveling lifestyle,” Reese said.

None of these successful FLW Outdoors professionals had what schools of business administration would call a “strategic plan.” They did, however, have three things in common.

One: each assessed the nature of life as a professional angler and wanted to do that. Though not a “plan,” they knew what they were getting into.

Two: each saw an opportunity, and from different stages of life, seized it, even after recognizing the risk presented by relying on fickle bass.

Three: each had built a record of success in competitive bass angling at a lower level.

These anglers, and many more on the FLW Outdoors tournament trail, have managed to build successful careers with the support of their families thanks to their insightful planning.

College training may not seem to be critical to success in professional bass fishing. There are no college curricula on the subject, and there is no substitute for time on the water. Higher education, nonetheless, provides skills of use to professional tournament anglers. As all aspects of life become more technical, college training will doubtless become a more common thread in the field.

With 40 years experience advising college students, were someone to approach me and indicate a desire to join the professional tournament trail, here is what I would advise:

Major in whatever you like. To be successful as a student, you need to be in a curriculum you enjoy. Be sure, whatever major you choose, to get lots of biology and wildlife management.

Think of professional angling as a small business. Take some courses in the business college, especially those dealing with small-business management and accounting. Take a couple of courses in public speaking to prepare for presentations and seminars.

With these ideas in mind, you should be well on your way to building a solid foundation for a bass-fishing career.

Click on the links to read related sidebars: “Profile of Pat Fisher” and “Up through the ranks.”