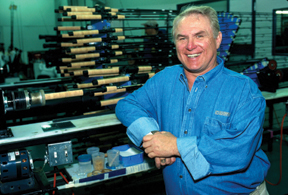 Ever since the introduction of the first graphite rod by Fenwick in 1974, myths about this mysterious material have been growing and circulating the globe like wildfire. How many times have you been told that the difference between IM6, IM7 and IM8 is the difference in quality standard, or that the higher the modulus, the more graphite was used to produce the rod?

With there being so many misconceptions surrounding this material, Gary Loomis – one of the world’s foremost authorities on graphite rod design and founder of the G.Loomis Corp. – agreed to lend his expertise to eliminate these myths.

Loomis began by explaining that the identifiers IM6, IM7 and IM8 are the trade numbers used by the Hexcel Corp. to identify their product and is not an industry quality or material standard, although the Hercules Fibers produced by the Hexcel Corp. are the benchmark that most companies use to compare their materials. The confusion is compounded because a number of rod manufacturers use materials produced by companies other than Hexcel and yet identify their rods as being IM6, IM7 and IM8, which by itself means nothing.

What an angler needs to understand is how the word “modulus” pertains to graphite rods. Modulus is not a thread count, as many would have you believe. Modulus basically equates to stiffness. The higher the modulus, the stiffer the material is by weight, meaning less material is needed to achieve the same stiffness of lower-modulus materials. This results in a lighter product.

“You have to remember, weight is the deterrence to performance,” Loomis said. 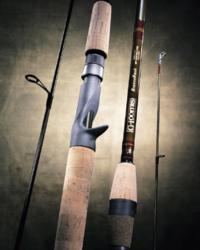 But you cannot talk about modulus without including strain rate, or the measured strength of the material. While modulus is reported in millions, strain rate is reported in thousands. An acceptable strain rate for a fishing rod is 680,000 or higher. A graphite rod made from IM6 Hercules Fibers will have a modulus of 36 million and a strain rate of 750,000.

With the original materials used for graphite rods, as the modulus rate increased, the strain rate would decrease, resulting in the rods being more acceptable to failures because of brittleness. However, through the advancements of materials, technology and engineering design, companies are able to produce high-modulus, high-strain-rate rods. These new high-tech fishing rods are super-light, responsive, and extremely sensitive and strong.

But the misconception of brittleness still plagues them, and the reason for this is because as the modulus gets higher, the less material is needed and therefore used. This means that the wall thickness in the blank, which is basically a hollow tube, is thinner. “Remember what I said before – weight is the deterrence to performance,” Loomis said, and went on to tell a story:

“I had a gentleman come in with a fly rod that broke near the handle, and he was asking for a new rod. I examined his broken rod and knew from the break – it was splintered – that his rod broke from abuse. So I asked him how it broke, and the man, being sincere, told me it broke while fighting a fish. I explained that it would be nearly impossible for the rod to break this way. But to be fair, (I told him) if he could break another rod the same way, I would give him three brand-new rods of his choice, but if he couldn’t, that he would pay for the repairs, and the man agreed.

“So I took him out in the back by the shipping docks and handed him an identical rod. With the rod in his hands, I grabbed the blank and asked him to apply the same pressure he was using when it broke. The man was applying a great deal of stress on the rod, and it wasn’t breaking. So I asked if he wanted to apply even more pressure, and the man responded that he didn’t think he could, but he insisted that is how his rod broke.

“So then I told him, `We are going to break this rod, so that it breaks just like yours did.’ I then laid the blank on a rubber mat and I kneeled on it by the handle, and we tried it again but it didn’t break. Then I laid it on the concrete and kneeled on it. Examining the rod, you couldn’t see it was damaged, but this time the rod broke just like his did, and the man simply asked where he needed to pay to get his rod repaired.”

The point of this story is that these high-modulus, high-strain-rate, thin-walled rods are extremely strong and are highly unlikely ever to break under normal use. Almost all rods are damaged by other means – an angler accidentally stepping on them, hitting them against a hard surface while casting, or storing them where a toolbox or some other heavy object can slide into them. Then, with the damage done, the rod collapses while under the stress of fighting a fish. So while high-modulus, high-strain-rate rods are not brittle, they do require more care in storage and transport.

There is a graphite rod made for every angler and their lifestyle. Composite blends (a mix of graphite and fiberglass) can take a lot of abuse. Intermediate modulus rods (33 million to 42 million) with high strain rates (700,000 or higher) still offer a lot of sensitivity and responsiveness and are quite durable. The high-modulus, high-strain-rate, extremely light rods are usually a rod manufacturer’s high-end product. These rods are the ultimate in responsiveness and sensitivity, and they cost a lot more than the average fishing rod. As with anything that costs this type of money, you would want to take a lot better care of it, including using protective cases to store and transport them around.

Hopefully, you now have a much better understanding of graphite as it pertains to fishing rods, and as a result, understand the care you need to employ with their use, storage and transport. Finally, armed with your newfound knowledge, you will be able to make a much more informed decision the next time you purchase your next graphite rod.