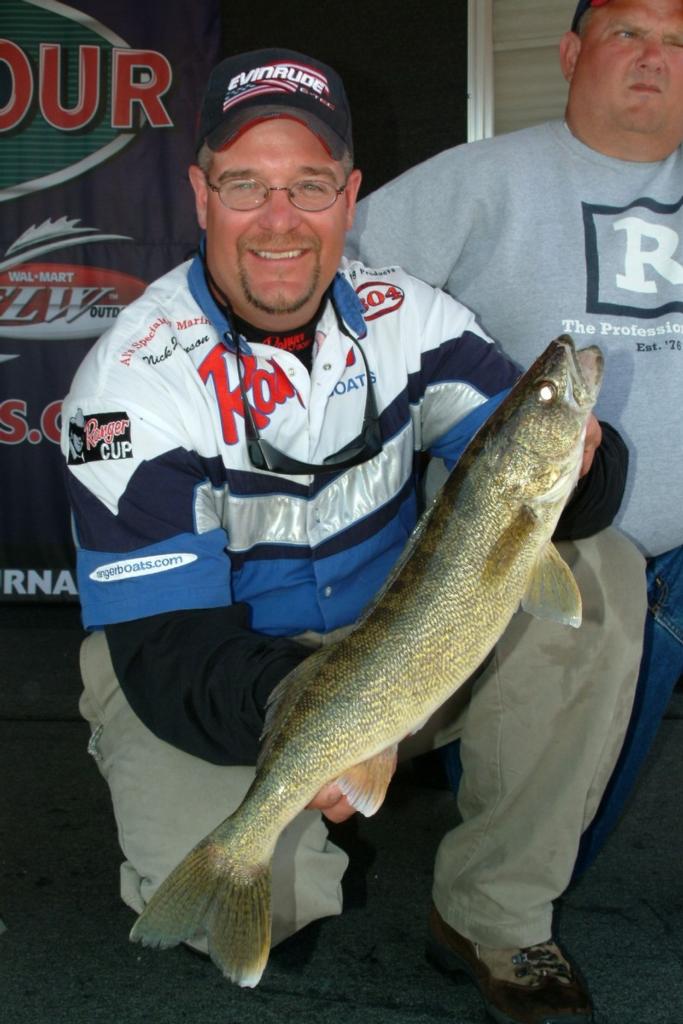 BULL SHOALS, Ark. – Although many anglers didn’t think it was possible, day three of the Wal-Mart FLW Walleye Tour event on Bull Shoals got even tougher. These walleye experts entered the tournament thinking the musky was the fish of 1,000 casts, but they will likely leave thinking otherwise. Only 21 fish that weighed a total of 64 pounds, 15 ounces were brought to the scales Friday as the field was trimmed to the top 10 pros and top 10 co-anglers.

Nick Johnson was once again one of the few anglers who caught a fish. Johnson’s lone walleye weighed 4 pounds, 6 ounce, giving him a three-day total of 20 pounds even.

The Elmwood, Wis., resident was satisfied with his catch Friday and said he has attained his goal each day.

“My goal every day has been to catch one fish,” he stated. “With this tough bite it’s important to stay mentally focused. You can’t have two until you get one.”

On his prospects of winning the event tomorrow, Johnson said, “I’m running scared all day long. The guys behind me are great anglers. Todd was one of the first pros I ever fished with. I feel good; it always feels good to be close to $80,000.”

Todd Riley did his best to catch Johnson by bringing in one walleye that weighed 3 pounds, 13 ounces, but ultimately came up short.

“I absolutely struggled all day,” said Riley. “After yesterday’s success, we had a lot of boat traffic around us. The clear skies definitely slowed us down and there was barely a ripple on the water. At this point, I’m feeling very fortunate to have scratched one out.”

On his prospects of catching Johnson, the Amery, Wis., native said, “I will have to catch at least one more fish than Nick does. At this point, Nick is in the driver’s seat. I’m looking forward to having open water and not having so much pressure around me.”

Robert Crow continued his steady pattern of weighing fish each day and finished the opening round with a combined weight of 12 pounds, 14 ounces.

“It always feels good to be in it, especially when the bite is this tough,” he said. “By doing well in the first tournament of the year, you are on top of the game for the points race.”

The Paterson, Wash., resident realized he has work cut out for him tomorrow if he is going to catch Johnson.

“It’s going to take a good bag,” he said. “If it keeps going the way it is, I’ll need 10 pounds to give him a run for his money. We need some wind tomorrow. I’ve been getting nearly all of my fish within the first five casts of the day. If we had some wind, the fish would stay up to feed longer.”

Slipping to fourth place was De Soto, Wis., native Robert Lampman. After bringing in 12 pounds, 1 ounce on day two, Lampman was unable to bring in a walleye on day three. Further proving the difficulty of the bite, Lampman only dropped one place.

In fifth place was Chris Gilman, who caught one walleye that weighed 3 pounds, 6 ounces. Gilman’s opening round catch was 12 pounds even, only 1 ounce behind Lampman.

Rounding out the top 10 pros who will be fishing on day four at Bull Shoals:

On the co-angler side, William Brewer retained his lead by employing his nonstop casting strategy and bringing in one walleye that weighed 3 pounds, 9 ounces.

“I estimated that I’ve been making approximately three to four casts per minute,” Brewer said. “Once again, we casted crankbaits all day, for at least five hours. I think the bite actually got worse today.”

On having a near 3-pound lead going into the final day of the tournament, Brewer said, “This is only my second time making the cutoff. I’m not too excited just yet, but talk to me tomorrow. I’d like to hope that one fish tomorrow would win it, but my goal is two for safe measure.”

Coming in second for the co-anglers was Dave Crawford of Maybee, Mich. Crawford partnered with Kolinski on day three and caught one walleye that weighed 3 pounds, 13 ounces to push his opening-round total to 15 pounds, 13 ounces.

Co-angler Jim Schleicher of Maxwell, Neb., once again zeroed, but fell only one spot to third place with a total weight of 12 pounds, 9 ounces.

Dana Delp of Lansing, Mich., claimed the fourth spot for the co-anglers with a weight of 9 pounds, 5 ounces.

Rounding out the top 10 co-anglers who will fish on day four at Bull Shoals:

The final day of FLW Walleye Tour competition at Bull Shoals begins as the top 10 pros and 10 co-anglers take off from Bull Shoals Boat Dock at 7 a.m. Saturday. The final weigh-in will take place at 4 p.m. Central time at the Wal-Mart Supercenter located on Highway 62/412 in Flippin, Ark.