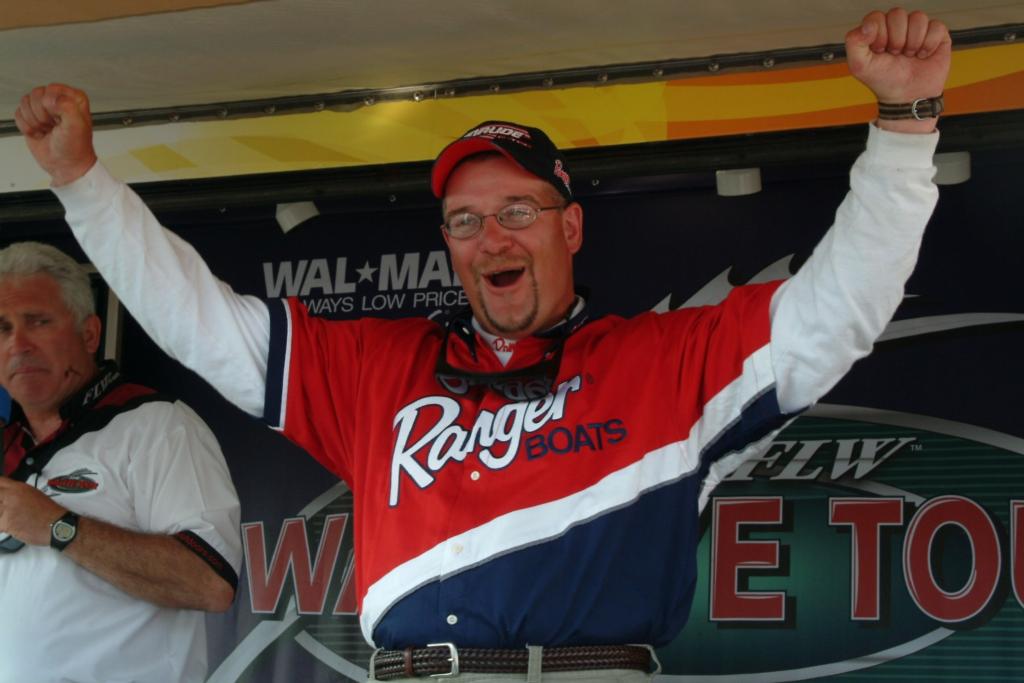 BULL SHOALS, Ark. – Leading throughout the four-day Wal-Mart FLW Walleye Tour event on Bull Shoals, Nick Johnson was unquestionably the best angler in the field. On day four, Johnson was unable to boat a walleye, but he had more than enough weight to capture an $80,000 purse.

Johnson’s four-day total weighed 20 pounds even. His closest competitor was 3 pounds, 10 ounces behind.

“I credit this victory to dedication and hard work,” he said. “About four days before the tournament began, I went out at night looking for some spots. I found a spot I liked where I shined a couple dozen fish.”

Johnson, who earned $300,000 at last year’s FLW Walleye Tour Championship on the Mississippi River, said that he used a blue and white Lucky Craft Pointer 78 DD to land the majority of his catch.

“We kept on casting,” said Johnson of Elmwood, Wis. “A lot of it was sheer determination. This lake really tried me.”

On winning back-to-back events, the latter won in wire-to-wire fashion, and bringing home $80,000, Johnson said, “It feels pretty outstanding,” he said. “I plan on giving the money to my wife when I get home. I’m sure she has lots of plans for it.”

“Nick’s a real nice guy, but I would have really liked to have kicked his butt,” stated Riley. “I have experienced incredible fishing here in the past. It helped me keep the faith throughout the tournament. My arm is really sore.”

Riley further reflected on his performance and stated, “I wanted to take Nick out. I wanted to make him work for it.”

Robert Crow was unable to boat a fish Saturday for the first time during the four-day tournament, but was able to collect a check for $14,500.

“We didn’t even have a bite,” he said. “It started bad and kept going downhill, but we fished hard the whole tournament.”

Crow described the area he was fishing.

“I never got more than three miles from the launch,” said Crow. “I was fishing points all day long, and all my fish came in 2 or 3 feet of water.”

Finishing in fourth place was De Soto, Wis., native Robert Lampman. Lampman, like all the others in the top five, did not catch a walleye on Saturday.

“I was on fish throughout the tournament,” said Lampman. “After day two, the bite was progressively slowing down. I was using an easy strike system with spinnerbaits, floats and crawlers, fishing between 18 and 22 feet of water.”

Chris Gilman earned $12,000 and finished in fifth place with a four-day total weight of 12 pounds even. Gilman boated a walleye Saturday, but it was just short of 18 inches.

“The third cast of the day, Janet tied into a nice walleye,” Gilman said. “We brought it in, netted it and it measured less than an inch short. We missed one fish later in the day. We caught lots of smallmouth bass and trout though.”

Rounding out the top 10 pro finalists at the FLW Walleye Tour event on Bull Shoals Lake: