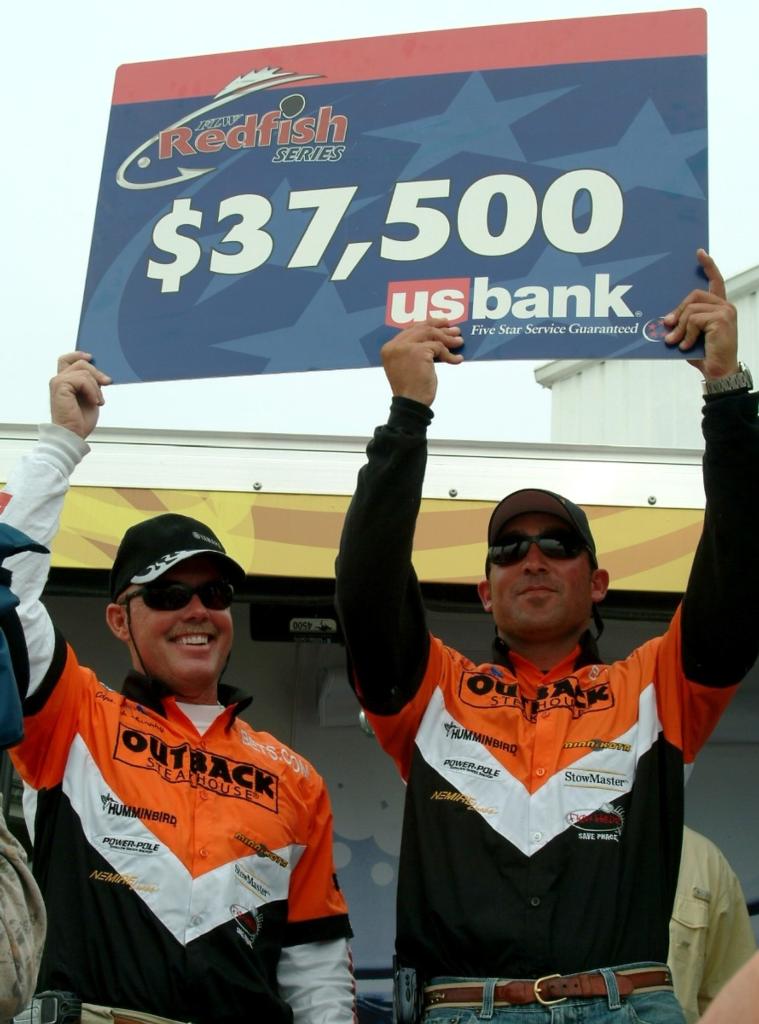 JACKSONVILLE, Fla. – If ever a fishing tournament favored the locals, it was this week’s Wal-Mart FLW Redfish Series East Division contest held in northeast Florida. All but one of the 10 anglers in the top five teams hail from Jacksonville.

But that’s no surprise, really. A tougher bite significantly curtailed catches in the second half of competition Saturday. And, on a tough bite, it’s generally the locals who manage to squeeze a few good ones out of the water.

Emerging atop the Jacksonville heap was the team of Scott Guthrie and Rick Murphy, who also led day one. They caught two redfish weighing 11 pounds, 4 ounces Saturday and won with a two-day total of four fish weighing 26-4.

“I’ll tell you what, I’ve fished every one of these (competitive redfish) tournaments since 1999 and I’ve never won one. I’ve been so close a bunch of times, but you can’t really plan to win one,” said Guthrie, a Jacksonville native. “You just take what you get. I guess it was just my time.”

“It’s been a cooker out there and, truthfully, this is all on Scott,” said Murphy, a well-known guide and TV personality out of Homestead, Fla., and the only non-local angler in the top five teams. “He had really done his homework before the event. I got up here earlier in the week and he said, `Let’s do this, this and this.’ And that’s what we did.”

What they did both days of the tournament was make the short run to the Sisters Creek area and go sight-fishing. Exclusively throwing plastics in shallow water, they caught a 5-pounder around 8:30 a.m. Saturday then fell victim to the slot limit on their second fish, which was about two inches too long. The slot limit for redfish here is 18 to 27 inches.

Guthrie and Murphy persevered through the midday dry spell that has been prevalent all weekend and ultimately landed their second, and last, keeper, a 6-pounder, around 1 p.m. As the tide rose and the wind kicked up, they tucked back into the shelter of a creek and caught the winning fish. The baits they said they used were Exude Mister Twister Crabs and Shrimp.

“Sight-fishing’s all we did this tournament,” Guthrie said. “It was tough today. The wind was blowing like crazy later in the day. In redfishing, it’s all about making the right presentation to the fish you can see. We just happened to put a couple baits in front of the right two fish today.”

Ken Weinstein and Fred Grey, both of Jacksonville, caught a lot more fish than the winners Saturday, but they couldn’t quite catch up due to their catches’ size. After placing ninth on day one, Weinstein and Grey caught another two-fish limit – weighing 11 pounds even – and finished second with a two-day total of four fish worth 23-8. They won $10,600.

“We caught a lot more fish today than we did yesterday,” Grey said. “I think we had seven or eight of them, including one that was oversized.”

“The wind was definitely stronger today,” Weinstein said. “The water was rougher and the fish were smaller. We just couldn’t sight-fish like we did yesterday, but we had two really good days.”

They caught their fish on Gulp Shrimp and Curly Tails.

Also climbing into the top five were Randall Padgett and Danny Brown, both of Jacksonville. They caught one of the bigger two-fish limits Saturday – 12 pounds, 13 ounces – and finished third with a two-day total of four fish weighing 23-6. They earned $5,850.

“The wind probably helped us, as far as the flats fishermen are concerned,” Brown said. “We don’t fish flats as much as we do deep creeks.”

The team caught their last, kicker red just minutes before weigh-in, taking advantage of the windy conditions and rising tide.

“The water got just high enough 30 minutes before we had to come in,” Brown said. “We came in immediately after we caught that fish.”

“The wind picked up and it was tough on us, but you can’t let things like that get to you,” said O’Brien, who added that they caught six or seven fish on Quasi jigs and a Jaw Jacker. “We got on a pretty decent bite right off the bat, and those were basically the only fish we had all day.”

“We’re happy with what we got, but we should have done better,” Hastings said.

Rounding out the stack of Jacksonville anglers were Richard Hulett and James Scully, who finished fifth and collected $4,400 with a two-day total of four fish weighing 23 pounds even.

Throwing mostly an Exude Mite, they caught several fish early and eventually culled out to an 11-pound, 12-ounce limit Saturday.

“We basically caught our fish at low tide in one to two feet of water,” Hulett said. “We had these fish by 8:30 this morning.”

Rounding out the top 10 team finishers in FLW Redfish action in Jacksonville:

The next Wal-Mart FLW Redfish Series event is the West Division opener and is scheduled for Port Aransas, Texas, May 6-7.