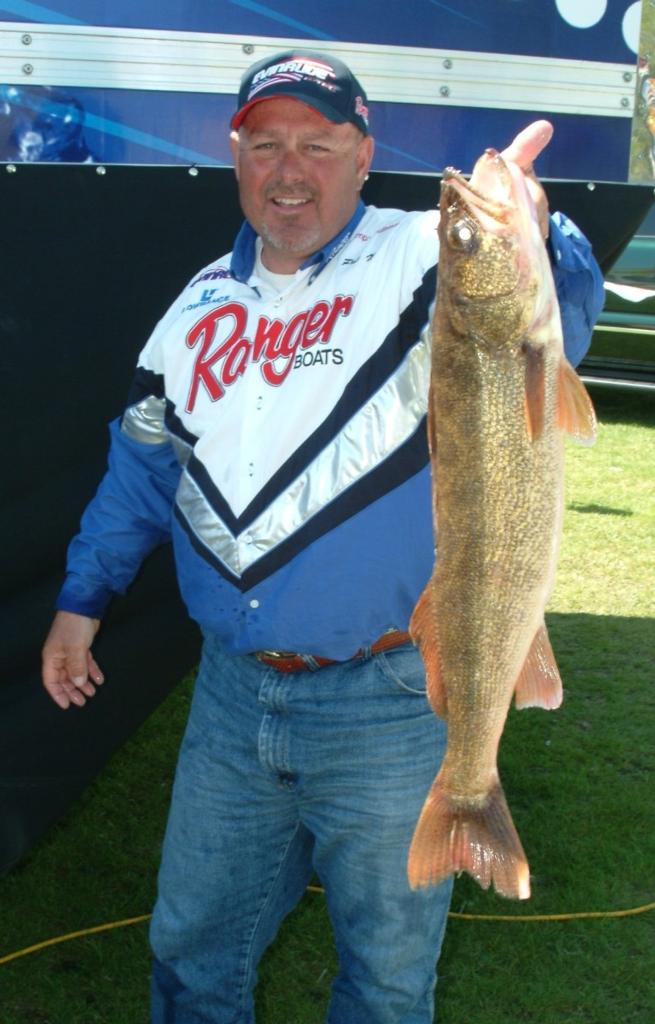 GREEN BAY, Wis. – Although the weights decreased slightly on day three, the cream of the crop had little difficulty bringing in quality fish. Forestville, Wis., native Pat Neu continued his string of 30-pound days with a five-walleye limit of 30 pounds, 10 ounces. Neu’s consistency has finally landed him in the top spot on the pro side with only one day of competition remaining. Overall, 383 fish that weighed 1,579 pounds, 12 ounces were caught Friday as the field was trimmed to the top 10 pros and top 10 co-anglers.

Those anglers who braved the choppy waters and made the run to the main lake were generously rewarded, as the nearby bay bite cooled considerably.

Neu was one of only a handful of anglers to resist the urge to fish close to the launch. His limit gave him a three-day total of 96 pounds, 1 ounce, and he said he feels confident that he has plenty of fish remaining.

“We’ve had three days in a row of 30 pounds plus, and we’ve got a lot of fish left,” he said. “My only concern is that there is a local tournament that starts on Sunday, so there could be guys prefishing in my spot. If they leave me alone, I’ll be fine.”

Neu is sharing the area with fellow Wisconsin anglers Mark and Tom Keenan.

“All three of us are using the new engine-mounted trolling motor from Minn Kota,” said Neu. “It gives us tremendous control, and it is very quiet. This feels good, but I’ve still got to get 30 pounds tomorrow.”

Neu’s steadiness has awarded him a 5-pound, 13-ounce cushion over his nearest competitor.

Pat Schuette had his chances on day three, but had several big fish come unbuttoned near the boat. Although he was able to boat five walleyes that weighed 24 pounds, 1 ounce, Schuette’s misfortunes dropped him to second place on the pro side.

The Manitowoc, Wis., native still managed to raise his opening-round total to 90 pounds, 4 ounces and said he feels his best is yet to come.

Schuette said that he fishing about 20 miles from the launch and is sharing his spot with Dan Plautz. “It’s a big area, so we’re not on top of each other at all.”

On his prospects of catching Neu, Schuette said, “My goal is 35 pounds tomorrow, which is doable if I get the southeast winds.”

“I started out poorly and made some bad decisions,” said Keenan. “I came back with a great basket yesterday and a consistent basket today. Tom (Keenan), Pat (Neu) and I are fishing the same area. It’s about a two-mile area that can take anywhere from 30 minutes to two hours to get to, depending on the wind. Between the group, we just enjoy fishing together.”

Keenan said his presentation is similar to his competitors.

“We’re running crawler harnesses like everyone else, but there are subtle differences in our presentation. With the new Minn Kota engine mounts, we’re able to troll slower than anyone else.”

Moving up to fourth place was Bismarck, N.D., native Troy Morris. After bringing in 22 pounds, 8 ounces on day two, Morris was able to locate bigger fish on day three. His five-walleye limit on day three weighed 30 pounds even, bringing his opening-round total to 78 pounds, 6 ounces.

In fifth place was Dan Plautz, who rebounded after a subpar day two by bringing in five walleyes that weighed 32 pounds, 5 ounces. Plautz’s three-day total was 74 pounds, 10 ounces.

Rounding out the top 10 pros, who will be fishing on day four at Green Bay:

On the co-angler side, Mark Cottingham retained his lead by catching 24 pounds, 7 ounces on day three, raising his opening-round total to 91 pounds, 10 ounces in the process.

“This being my first tournament, I’ve been so fortunate,” he said. “Being at my hometown makes this even sweeter.”

Cottingham was ecstatic to be reuniting with Neu tomorrow.

“Now that we’ve been with each other in the boat, he knows what I expect from him, and I know what he expects from me. He’s the captain, and I’ll follow his lead.”

Reality still hasn’t sunk in for Cottingham, who has a comfortable 8-pound, 15-ounce lead.

“When I put the money down to get in the tournament, I thought it was a great investment. I never thought I’d be in the lead. This is beyond my wildest dreams.”

Coming in second for the co-anglers was Randy Peterson of Omro, Wis. Peterson partnered with Dean Stoflet on day three and registered the day’s heaviest weight. Peterson’s five walleyes weighed 32 pounds, 14 ounces and pushed his opening-round total to 82 pounds, 11 ounces.

“I think everybody is going to come in with big baskets tomorrow,” said Peterson. “I’ve never made the top 10 before, so I’m thrilled to death to be fishing on the final day. I’m just hoping to hold on to second.”

Scott Tipton of Box Elder, S.D., claimed the fourth spot for the co-anglers with a weight of 77 pounds, 12 ounces.

Rounding out the top 10 co-anglers, who will fish on day four at Green Bay:

The final day of FLW Walleye Tour competition on Green Bay begins as the top 10 pros and 10 co-anglers take off from Metro Park Boat Launch at 7 a.m. Saturday. The final weigh-in will take place at 4 p.m. Central time at the Wal-Mart Supercenter located on West Mason Street in Green Bay.