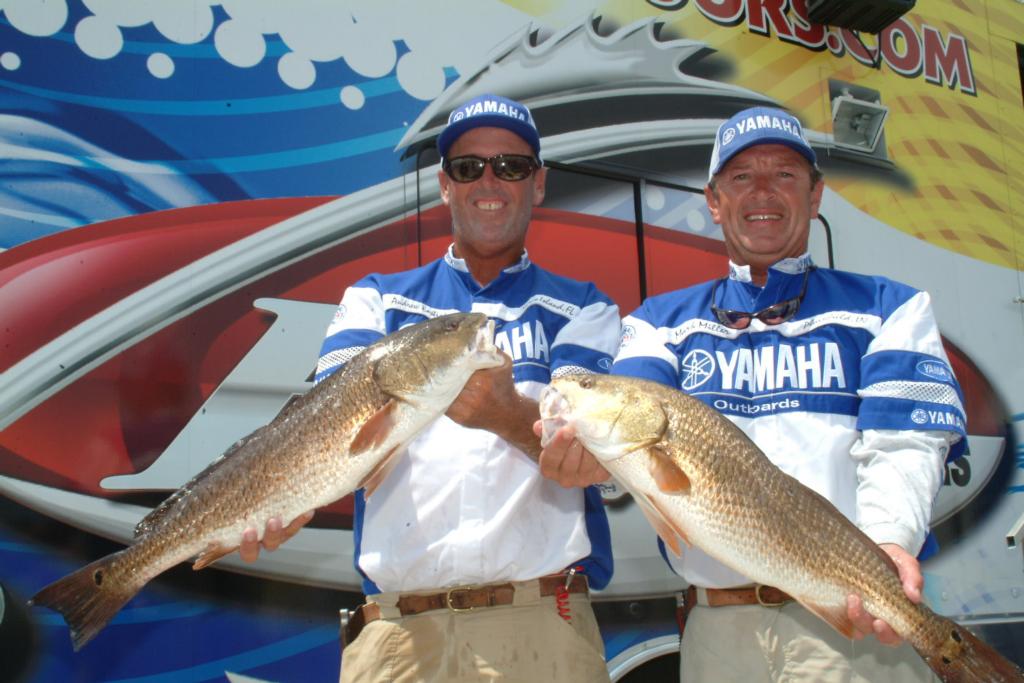 ENGLEWOOD, Fla. – Tournament redfishing is a relatively young sport, but it is already growing legends. Andrew Bostick of Marco Island, Fla., and Mark Miller of Plainfield, Ind., are two such rising redfish stars.

Bostick and Miller have already won Team of the Year honors on the IFA and Redfish Cup circuits and now they are eyeing FLW Redfish Series trophies for their mantles.

The team dropped two redfish in the scales today that topped out at an impressive 16 pounds to take the day one lead in the Wal-Mart Redfish Series Eastern out of Englewood, Fla.

“Mark and I were working singles and small groups of fish with maybe 8 to 15 reds per pack,” he said. “We couldn’t see the actual fish, just the wakes and pushes from individual fish that would give away their location.”

Bostick thinks the stained water is actually helping their cause.

“We are making really long casts with Berkley Gulp! Shrimp,” Bostick noted. “I think the stained water is working to our favor by keeping the fish calm. If it was clear like it normally is, I don’t think we could get as close to the fish without spooking them.”

Just 5 ounces behind Bostick/Miller with 15 pounds, 11 ounces are two redfish anglers who are already legends in the sport: Bryan Watts of Lithia, Fla. and Greg Watts of Eagle Lake, Fla.

The Watts brothers have filled their trophy cases with dozens of redfish tournament trophies as well, including IFA and Redfish Cup Team of the Year titles, and they too are ready for their first Redfish Series win.

“We’re not worried about them,” Greg Watts joked about Bostick and Miller on stage. “We figure

Andrew will get vapor lock about noon tomorrow.”

Tournament Director Dan Grimes then asked, “If Bostick and Miller caught another 16 pounds tomorrow and you guys only had about 12 pounds and you saw them on the water with some kind of problem, would you stop to help or just ride on by?”

Then Watts came clean about the true spirit found in redfish pros.

“It wouldn’t matter what kind of fish any of us had, we aren’t leaving anyone out on the water,” he said. “We’d bring them in a heartbeat, and truthfully, if we are going to get beat, I’d just as soon get beat by them. Andrew and Mark are outstanding fishermen and first class guys.”

The Watts’ strategy today centered on fishing the mangroves with Gulp! Shrimp on a jighead. The team would skip the plastic lure up under the mangrove canopy and then slowly drag the bait out.

“The pattern Greg found is fishing the green mangroves,” said Bryan Watts. “The hurricanes here last year wiped out a lot of the mangroves and all that’s left is dead wood. But there are certain stretches that survived and still have lush green growth providing plenty of shade.”

“Also the turn of the tide was a key,” Greg Watts added. “As soon as the tide turned today, the fish turned on and that’s when we did our damage.”

Tanner and Hughey “skip” to third

In third place is the team of Travis Tanner of Christmas, Fla., and Jason Hughey of Davenport, Fla., with two fish redfish weighing 15 pounds, 6 ounces.

Tanner and Hughey also skipped mangroves with soft plastics to catch their fish.

“We only caught three today,” Tanner said. “The number of fish doesn’t concern us as long as we get two. The way we’re fishing hasn’t provided a lot of strikes in practice, but everyone we’ve caught has been in that perfect top-of-the-slot size.”

Joseph Porcelli of Oak Hill, Fla., and Jeff Stellinga of Windermere, Fla., are in fourth

Sight-casting Berkley Gulp! Shrimp to meandering reds was the order of the day for Porcelli and Stellinga who caught a total of four redfish.

“When we’d see a pack of reds cruising down a bar, we tried to get ahead of them, stake down with the Power-Pole and cast out in front of them,” Porcelli described. “We had a little cleaner water today than we’ve had all week and that helped with seeing the fish a little better.”

McKenzie and Brantley caught their two best keepers almost immediately this morning and spent the next five hours guarding and watching their school of redfish.

“We didn’t make another cast for five hours,” McKenzie said. “We just sat their and watched them mill around because we didn’t want to pressure them for tomorrow.”

Rounding out the top 10 teams in the FLW Redfish Series Eastern:

Chris Rush and Scott Rush both of Fort Myers, Fla., in sixth place with 14 pounds, 11 ounces.

Scott O’Brien and Wade Hastings both of Jacksonville, Fla., in seventh place with 14 pounds, 7 ounces.

Jeff Pope and Jimmy Koller both of Jacksonville, Fla., tied for eighth place with 14 pounds, 4 ounces.

David Carter and David Wallins, both of Alva, Fla., in tenth place with 14 pounds, 3 ounces.