These rock structures can be goldmines for autumn river walleyes 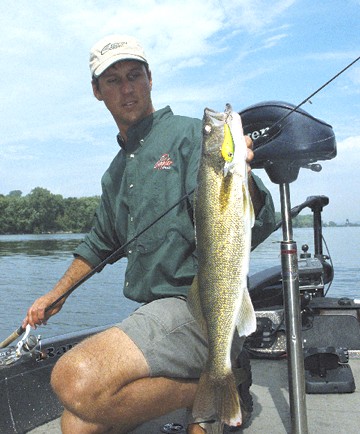 November days get chilly in Minnesota, but Steve DeZurik doesn’t mind. In fact, he doesn’t mind the biting cold that November nights bring. Fall triggers a major feeding binge among Mississippi River walleyes. They seemingly sense that living conditions are about to get rough, and the fishing gets red hot by day and especially so by night.

DeZurik, a Twin Cities fishing guide and Wal-Mart FLW Walleye League competitor, who intimately knows the upper Mississippi River, focuses most of his autumn attention on wing dams – rock jetties that run perpendicular to the river bank for the purpose of maintaining good flow through the river’s navigational channel.

Water flowing over the tops of the rocky structures and around their ends creates natural ambush points where big walleyes can nab gizzard shad that get washed past. Anglers who gain an understanding of water-flow dynamics around wing dams and related walleye behavior find some of the best big-fish opportunities of the year around these structures during the fall.

“You can catch great numbers of walleyes in the deep, outside bends in the river,” DeZurik said, “but the wing dams produce large fish. Ninety percent of the large walleyes – fish over 5 pounds – that I have ever caught have come from water less than 10 feet deep.”

The best wing-dam bite gets going during late fall, usually in early to mid-November on the section of river DeZurik fishes. The river tends to be relatively low and stable at that time, causing fish to hold in predictable locations along the rocky structures. Falling temperatures trigger the big bite.

Chris Tuckner, a 2003 FLW Walleye League winner who guides for big `eyes a couple pools downstream of where DeZurik spends most of his fall days, also spends a lot of time fishing wing dams during the fall. Tuckner, however, considers September and October the prime months for daytime fishing.

The pools Tuckner fishes are shallower than DeZurik’s primary waters, and the wing dams are longer and shallower, which affects water-flow dynamics and how the two anglers approach the structures. DeZurik keys on walleyes that hold on the very tops of wing dams, right where the water sweeps over, believing those to be the most active fish. Tuckner concentrates on fish that hold in the pocket of slack water that exists at the base of each wing dam on the upstream side.

DeZurik always positions his boat on the upcurrent side of a wing dam, using his trolling motor to hold the boat a short cast upstream of the top of the rocks. He’ll start near the bank and work his way out, looking for fish. Much of the wing dam’s top will be under the water, so it’s critical that anglers be able to read the water in order to stay within casting range but keep their boats off the rocks.

DeZurik will work quickly while he is looking for fish, having found that if they are home, they typically will make themselves known quickly. When he gets hit, he slows way down, and if he catches a couple of fish, he’ll often anchor.

“There may be a concentration of big fish, and I want to pick that area apart,” DeZurik said.

DeZurik casts to the top of the wing dam or barely past it, and lets his offering, a YUM RibWorm or Croaker Curltail, fall slowly down the front of the wing dam on a tight line. Both baits feature a curly-tail design, which is important, because virtually all strikes come as the bait is falling through the water column. The swimming action of the curled tail as the bait falls triggers strikes.

DeZurik strings his offerings on 1/16- to 1/4-ounce jigs, selecting sizes based on the strength of the current. “You want the bait to fall all the way to the bottom but for the line to stay taut,” DeZurik explained. He uses spinning tackle and spools up with 6- or 8-pound-test fluorocarbon.

Tuckner also works quickly until he finds fish, but he does all his fishing from an anchored position. He’ll anchor about 25 feet upstream of the top of a wing dam, which puts his boat roughly over the base of the rocks. He’ll pitch his offering out at a 45-degree angle, allowing it to drop on a tight line and tick the rocks as it falls. He wants the bait to reach bottom right at the base of the wing dam. Most strikes come when the bait is close to the bottom of the rocks.

While Tuckner pitches some plastics on leadheads, he also likes live bait on Lindy rigs for fishing beside the rocks. He favors a leech or a minnow if he can find either that late in the year, but he also enjoys great success with night crawlers and madtoms.

The amount of weight needed varies with the strength of the current. “You want to tick the tops of the rocks, but you can’t really drop it into them or you’ll stay snagged,” Tuckner said.

Tuckner prefers a highly visible line when he drops bait beside wing dams. “If you see a little flinch in the line, that’s when you set the hook,” he said.

“You have to find the wing dam that has the right speed of current washing over it,” DeZurik said. “If the river is really low, the fish might be on the first wing dam in each series. If it’s higher, they might be two or three back.”

Wing dams, of which there are hundreds along the upper Mississippi River, are built in groups, usually along inside bends in the river channel or just upstream of bends. Each deflects a certain amount of water, so those at the front of each group have the strongest currents washing over and beside them.

Tuckner generally favors the wing dams that have the most current pushing over them in the fall, when the river tends to be low overall; however, he emphasized that water-flow mechanics are critical. An angler really has to study current strength almost daily.

Position within a pool does not seem to be a factor, according to DeZurik. The best wing dams might be near the head of one pool and halfway down another. Time on the water has taught him that specific groups of wing dams hold the most fish at various levels on his home waters. In other places, he’ll begin near the head of a pool and work his way downstream, moving fairly quickly from one structure to the next in search of fish.

DeZurik suggested giving extra attention to sections of river that offer better overall walleye habitat. While nothing about the wing dams themselves may set them apart, the most productive structures often will be in wide sections of river that contain a blend of ledges, deep holes, flats and other features that walleyes will use at other times.

Early in the fall, before the jig bite fires up, Minnesota guide and Wal-Mart FLW Walleye League angler Steve DeZurik casts crankbaits for wing-dam walleyes. He fishes the same parts of the wing dams and approaches them from the same angle; however, he uses baitcasting gear and heavier line and works very quickly.

DeZurik’s cranks of choice for early fall wing-dam fishing are Bomber Fat-Free Shads and Model As and Cotton Cordell Grappler Shads. He casts to the tops of the rockpiles, cranks hard enough to begin kicking the rocks, and then slows down to a steady pace.

Chris Tuckner, 2003 FLW Walleye League winner, uses crankbaits to fish the furthermost downstream wing dams in each series, which get heavily silted over time and become more like sandbars than rockpiles. “We sometimes do quite well trolling crankbaits right over the tops of those,” he said.