Stars and spots at Lanier 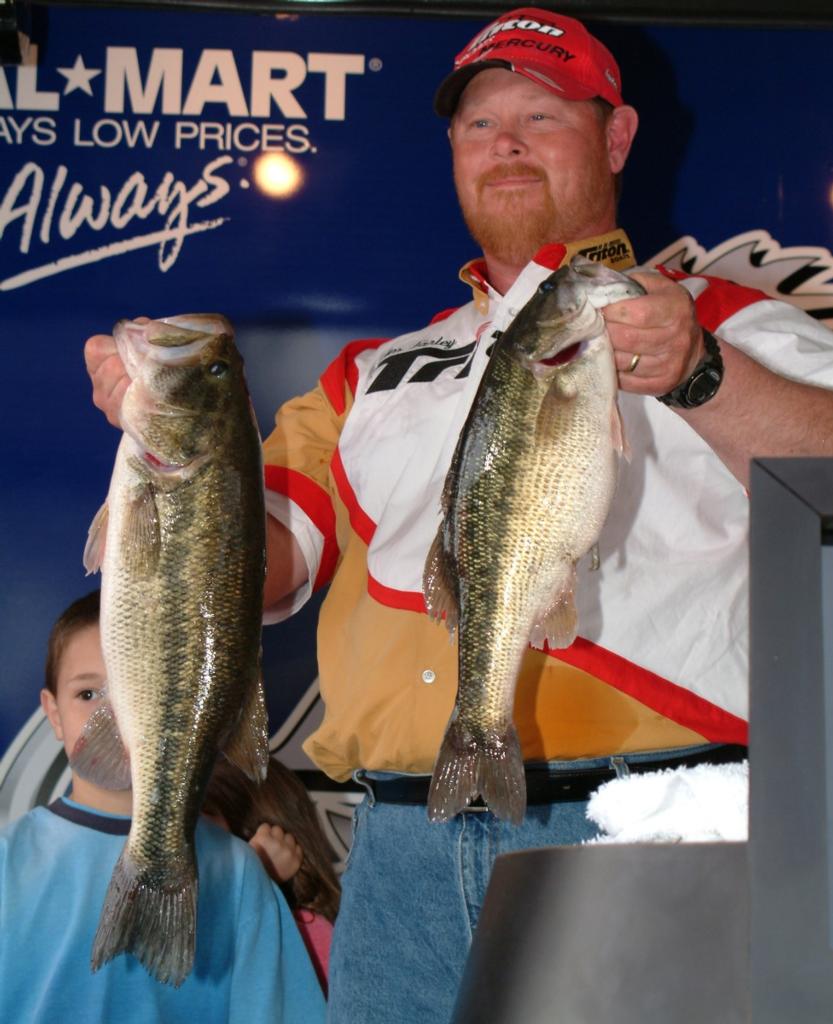 GAINESVILLE, Ga. – If you happened to be at Little Hall Park on Lake Lanier Wednesday afternoon, chances are you were seeing stars and spots.

Indeed, Lanier cranked out an incredible 112 limits in the Pro Division, most of which were spotted bass. The average weight per fish came in at about 2 1/4 pounds apiece.

Farley has been fishing Lanier for the better part of 30 years and fishes the lake 150 to 200 days a year. In the past three years, he has won four boats in local and regional competition.

Local knowledge has its benefits as Farley caught a limit of spots weighing 15 pounds in roughly 20 minutes at his first stop this morning.

“Once I get a good limit of spots, I start running and gunning for a big largemouth,” he said. “I culled out two of my spots for largemouth today.”

Farley is catching most of his fish on a 1/4-ounce Swarming Hornet Fish Head Spin in 15 to 28 feet of water.

“This is the time of year I do best here,” he said. “I know the areas that the big spots and largemouth stage in before moving up to spawn, and that really works to my advantage.”

Largemouths move in on Baksay

into his spotted bass hole, and even though he was targeting spots, he ended up with four largemouths and one spotted bass for 18 pounds, 1 ounce.

“It’s the weirdest thing,” Baksay said. “I haven’t caught a single largemouth in practice, and today I caught a bunch of them. I guess the water is warming up fast, and the largemouths are getting active.”

Baksay revealed that he is fishing “his favorite way,” and that his two biggest bass came from around docks. 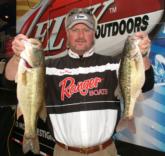 Peek found his fish in pre-practice several weeks ago and says they are still there.

“I never made a cast on them in official practice,” he said. “I just idled over the area, and I could tell by the amount of bait on my depth finder that the bait and fish were still piled in there. It’s definitely a feeding situation. The fish are feeding up for the spawn. Some largemouths moved in there today as well, so that helped.”

Peek thinks his area will hold up.

“As long as that bait stays in there and it doesn’t get a bunch of pressure, I think those fish will be in there for a while,” he added.

Ray Scheide of Russellville, Ark., holds down the fourth position with a sack of

Understandably, Scheide didn’t want to divulge much of his pattern, but he did say his fish came “ridiculously deep.”

“In the mornings, the baitfish are dead on the bottom,” Scheide said. “But up in the day, the bait will start rising up higher and higher in the water column. When that happens, it’s on. I had one fish at about noon, and then that bait started coming up and for the next 30 minutes, my partner and I wore them out. It was a lot of fun.”

Scheide noted that he did not know what makes the baitfish rise.

“I don’t know what the trigger is,” he said. “I don’t know if it’s wind, sun, warmth or what, but when it happens, I can see it on the graph and suddenly they start biting.”

Mark Rose of Marion, Ark., is in fifth place with 15 pounds, 6 ounces.

“I’ve got one little area that’s just loaded with shad, and these spotted bass are gorging themselves on bait,” he said. “To give you some idea of how fat they are, I caught a nice largemouth today that I just knew would cull one of my spots – the largemouth was 3 inches longer than every spot in the well – and I ended up throwing it back because it wouldn’t help me. I couldn’t believe it.”

Rose reported catching his spotted bass limit on a little worm and a hair jig in off-colored water in the middle portion of the lake.

Tim Shmigal of Akron, Ohio, weighed in the day-one big bass in the Pro Division at 7 pounds, 5 ounces.

Rounding out the top 10 pros in the Wal-Mart FLW Series on Lake Lanier:

Ty Hester of Russellville, Ala., leads the Co-angler Division with 13 pounds, 5 ounces.

“I fished with Scott Martin today,” Hester said. “He’s on a solid pattern, and I got fortunate to catch my two best fish real early – I mean like within minutes of our first stop. That gave me a jump on the day, and I finished out my limit later.”

Jeff Shelton of Hanceville, Ala., is in the runner-up position with 12 pounds, 7 ounces.

“To tell you what kind of guy Jeremiah is,” Shelton said on stage, “I needed one more keeper, he missed a fish and said throw in there and catch it, and I did. I can’t thank him enough.”

Sean Stepp of Stafford, Va., is in third place with 11 pounds, 11 ounces. Stepp got quite a treat today when he fished with local guide Ryan Coleman of Flowery Branch, Ga.

“It was definitely a guide trip,” Stepp said. “I caught about 15 bass on a crankbait and a worm; it was a fun day.”

Ronald Aikin of Valley Station, Ky., is in fourth place with 11 pounds, 10 ounces.

Gregory O’Neal of Winchester, Tenn., is in fifth place with 11 pounds, 9 ounces.

There was a tie for the big bass in the Co-angler Division between Scott Gibson of Biloxi, Miss., and John Bruce of Dacula, Ga., both catching lunkers weighing 5 pounds even.

Rounding out the top 10 co-anglers in the Wal-Mart FLW Series on Lake Lanier:

Compeition in the FLW Series on Lake Lanier resumes tommorrow at 7 a.m. at Little Hall Park.