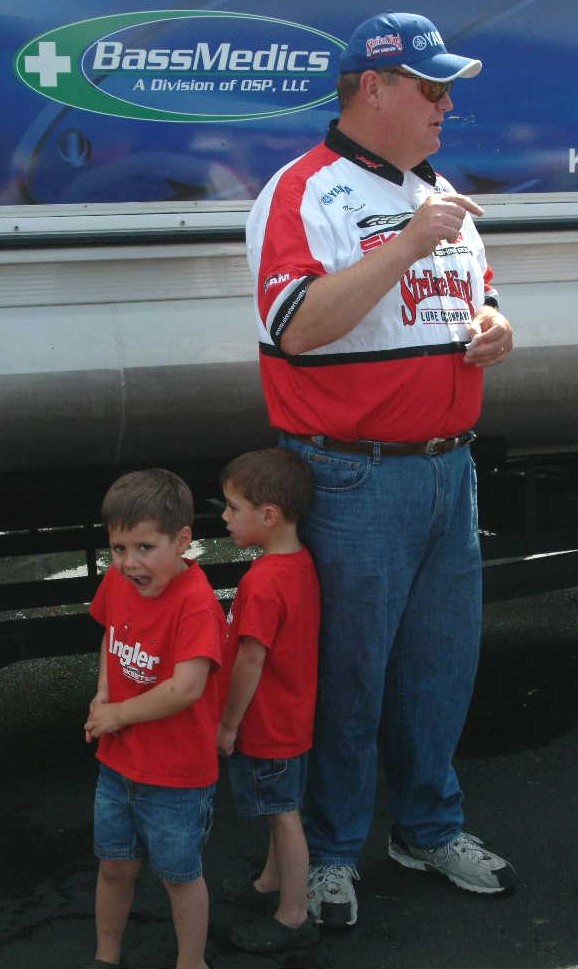 Preach it … Last night, pro Mark Davis delivered a message at the Christian anglers meeting, a testimony talked about on stage by several pros today. As it turns out, Davis had to take a bit of his own advice today after experiencing frustrating mechanical problems that thwarted quite a bit of his fishing time. By practicing what he preached, Davis put together one of the day’s better comebacks, catching a 13-pound, 2-ounce limit that’s a far cry from his day-one catch of 1 pound, 6 ounces. “My emphasis last night was having faith and putting your career in God’s hands,” Davis explained. “I talked about how we deal with trials and tribulations. I had trouble this morning, and I had one of those trials and tribulations.” … Davis ended day one in 150th place and jumped 116 spots up the leaderboard to end day two in 34th, within shooting distance of the top 10. He admits that a below-average performance on opening day can often make an angler shoot himself in the foot. “It’s hard to keep it going after a day like I had yesterday, when I didn’t catch any fish,” said the well-known pro. “I had never been to the actual water that I caught the fish out of today – it was a bang-up day.” Davis said he didn’t know if he was capable of putting together another 13-pound stringer tomorrow, but he does feel confident he can bring in a limit. “You never know,” he said.

Lone Star leaders … Though it’s a Kentucky lake favored by West Coast pros due to its deep water, it’s Texas that’s making its presence known this week on Lake Cumberland. The top four pros all hail from the Lone Star state – leader Mike Hawkes of Sabinal, No. 2 Clark Wendlandt of Leander, No. 3 Jay Yelas of Tyler and No. 4 Sean Hoernke of Magnolia. The West Coast is still representing, though, as Californians Rusty Salewske (No. 5) and R.J. Bennett (No. 8) are also currently in the top 10.

Insane LeSesne … Today’s heaviest stringer was a 16-pound, 9-ounce limit brought in by pro Johnny LeSesne of Blue Ridge, Ga. The catch was remarkable not only for its heft but also because yesterday LeSesne blanked and didn’t even make it to the stage. With Thursday’s weather conditions remarkably similar to yesterday’s – though without a lengthy fog delay – what made the huge difference? “I’ve been fishing for largemouths, and I couldn’t get them going,” LeSesne said. “So I decided to fish for smallmouths today, and it’s been a good deal.” Indeed. LeSesne’s five-bass catch was made up entirely of smallies, and he says he caught them in the main lake. 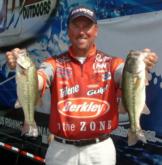 Bouncing around … Le Sesne and Davis aren’t the only anglers moving up the leaderboard thanks to day-two performances that far outshined what they put together on day one. Pro Ray Scheide caught only 4-6 yesterday for 85th place, but now sits in 22nd thanks to his day-two limit weighing 12 pounds. He said his problem yesterday was the lack of cloud cover and still looks forward to the incoming rain clouds, but he says he has a game plan now no matter what. “I can catch them in the sun now, so it doesn’t matter.” … Also jumping a few spots is yesterday’s No. 111 pro David Walker, who now sits in the No. 23 position thanks to his day-two catch of 13 pounds, 7 ounces. Interestingly, he got there by what is reportedly the most difficult path – by hunting for largemouths. “This is the first good day I’ve had in a long time,” Walker said. “I went largemouth fishing today – fishing for smallmouths is one of my weaknesses. I figured I needed to go with my strengths.” … Pro Andy Morgan had a similar reversal of fortune, catching 13-13 today after a day-one weight of 1-6, which resulted in a 119-place leap up the leaderboard, where he landed in 31st.

Tumbling down … Competitive anglers know that they can fall down a leaderboard as easily as they can climb up it, and a few pros took a tumble today after enjoying elite status yesterday. Day-one leader Johnny Crase retained a top-10 position, but fell from first to 10th after catching only one bass today that weighed 1 pound, 4 ounces. “These smallmouths, some days they don’t bite,” Crase said. “They’re there; I can see them. I know this lake really well – I’ve fished it all my life – and I know how to catch them. I don’t know about winning, so I’m just going to go fishing tomorrow.” … Yesterday’s co-angler leader Kevin Koone remains on top despite catching only one bass today. Luckily for him, that lone fish was a 4-pounder, allowing him to keep his lead with a 1-pound, 2-ounce margin.

Holding steady … With the three-day, full-field format of the FLW Series, an angler like No. 16 pro Guido Hibdon still has a shot to make the final-round top 10 thanks to the extra day of qualifying. Right now, Hibdon is definitely still in fighting form, having posted a 9-pound, 15-ounce limit on day one that was followed by today’s 7-pound, 2-ounce catch. Though the weights and numbers were better today, there were a few of yesterday’s top performers who slipped, so Hibdon’s steady numbers could bode well for his first top-10 finish since 2001 and perhaps his best finish since 2003. “It’s been a while,” said Hibdon, regarded by many as a legend in the sport. “But I’m sure going to try for it. It makes an old man feel good.” Hibdon did say he lost a 2-pounder this morning that just might come back to haunt him. “The lake’s got quite a few fish in it, but you don’t get very many bites,” he said. “I lost a 2-pounder this morning, and I didn’t realize it was going to bite me that bad. But it’s early.”

1: Number of five-bass limits caught on the co-angler side both yesterday and today.

6: Number of pounds – plus 1 ounce – that separate co-angler leader Koone’s day-one weight from his day-two weight.

1: Number of pounds separating No. 1 Hawkes and No. 2 Wendlandt. 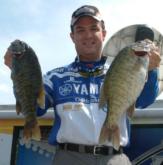 “It was like playing a big salmon with 30-pound line.” – Yelas, on getting a 5-pound, 2-ounce smallmouth in the boat.

“I’m dropping like a rock.” – Pro Cody Bird, who followed up his day-one catch of 11-7 with only 6 pounds on day two. He dropped four spots in the standings.

“She’d rather I drive 28 hours to get here.” – Minnesota resident and newlywed Chad Grigsby, on his and his wife’s conflicting opinions about moving farther south to get closer to the majority of the tournaments.