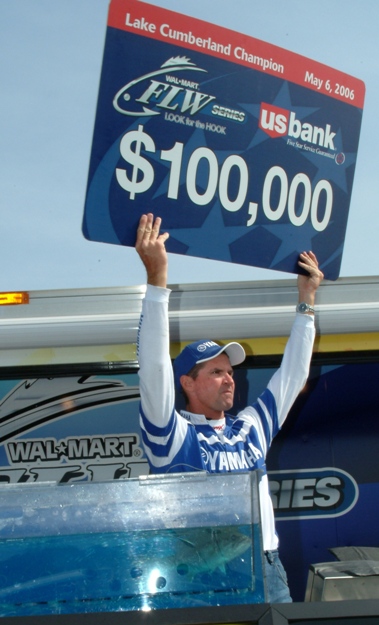 SOMERSET, Ky. – Professional fishing has been a long, bumpy road for Mike Hawkes of Sabinal, Texas.

His on-again-off-again attempts at fishing full-time date back to 1988 when he first went pro.

But limited success, paltry payouts and a severe car wreck (without health insurance) in 1990 forced him to give up his dream and go back to his “day job” – coaching and teaching biology in the little town of Sabinal.

For the next eight years, Hawkes worked, saved money and fished local tournaments in Texas, hoping for another shot at professional fishing. That opportunity came with the rise of FLW Outdoors, and in 2000 Hawkes once again set sail for a fishing career via the Stren Series and the Wal-Mart FLW Tour.

Today, Hawkes realized a life-long dream – to win a tour-level event worth $100,000 – when he dominated the FLW Series event at Lake Cumberland with a four-day total of 46 pounds, 15 ounces.

Hawkes’ final-day stringer of 12 pounds, 7 ounces, the only five-bass limit weighed in on day four, gave him more than a 10-pound margin of victory.

After his win, Hawkes was quick to compliment FLW Outdoors.

“If it wasn’t for Wal-Mart and FLW Outdoors, fishing would not be possible for me full-time,” he said. “I’m the kind of guy who has to make a living off prize money, because I’m not one to go around knocking on doors for sponsorship.

“I’ve fished professionally for the last six years now, and I couldn’t do that until FLW Outdoors came along and put real money into this sport – the kind of money that allows an angler like myself to win enough to pay entries, expenses and still have some left to call profit.”

Hawkes spent the week fishing near the dam for spawning smallmouths on rock slide outs and shelves. But today he realized he had caught most of what his primary areas had to offer, and he went on to fish new water and make things happen.

“The camera guys kept asking me, `Where are you going to next?'” Hawkes

recounted. “But I couldn’t tell them. I wasn’t trying to be secretive, but I honestly had no idea where I was going. Most of my better fish came off places I hadn’t fished before – they just looked right, and I pulled over and fished them.”

Hawkes did say the areas that produced for him today were more bluff-type areas with little pockets as opposed to shelves or short points.

His bait lineup for the week included an albino Zoom Super Fluke Jr. and a white Reaction Innovations Smallie Beaver that he used for a few sight-fish. But the bulk of his smallmouth weight came on a Reaction Innovations Flirt Worm in colors called “juicy” and “magic craw swirl.”

He fished the Flirt Worms on an 1/8-ounce jighead and wacky-rigged on a 1/0 Owner Mosquito hook.

West Coast anglers excel at staying patient and milking an area for all it’s worth with finesse, and Rusty Salewske of Alpine, Calif., exemplified that this week at Cumberland.

Salewske worked one area all week with finesse tactics to amass a four-day total of 36 pounds, 8 ounces, finishing second with a check for $50,000.

“I stayed in one creek, or hollow as they call them here, in the midlake section all week,” he said. “I tried some different water this morning, but ended up going back to the same area today to catch the two bass I weighed in.”

Salewske worked a Zoom green-pumpkin finesse worm pinned to an 1/8-ounce Spot Remover on 8-pound-test Sunline fluorocarbon line with casting tackle to catch most of his bass.

“I honestly never pinpointed exactly what the fish were doing,” he said. “I just know they were in this one area; the only thing I did notice is that they kept moving out deeper as the tournament went on. I started shallow, and by the end I was fishing out in 20 feet of water.”

During the first three days, Clausen fished Indian and Beaver creeks, targeting smallmouths by paralleling the bluffs and covering water with a Mann’s Hardnose finesse worm on a homemade jighead, tied to 8-pound-test Sunline.

“I kept my trolling motor on about 60 percent and kept moving,” he said. “I’d cast to every tree, nook, cranny, crevice, rock – whatever was there – let it fall to the bottom, and then I’d reel it up for another cast. The smallmouth were so aggressive, they’d eat it on the fall, so there was no need to work the bait at all. If they didn’t eat it on the initial fall, I wound it up and fired it back out there at the next target.”

Today, Clausen stayed close to the launch ramp to maximize his fishing time after the fog delay.

“I felt like my pattern from the three previous days was going away,” he said. “So I decided to stay close and target release fish.”

Day-three leader Sean Hoernke of Magnolia, Texas, fell off the pace today and finished fourth with a four-day total of 36 pounds, 2 ounces.

“They just didn’t bite for me today,” Hoernke said. “My spawning smallmouth bite kind of fizzled out.”

Hoernke spent the tournament fishing within sight of the dam. He used an 1/8-ounce homemade jighead tied to 10-pound line and varied his worm color depending on the sky conditions.

“I used a Zoom 4-inch finesse worm all week,” he said. “Green-pumpkin when it was cloudy and watermelon-candy when it was sunny.”

Steve Wright of Oskaloosa, Iowa, finished fifth with a four-day total of 32 pounds,

Wright, perhaps, took the unofficial award for least amount of gas burned to make the top-10 cut, as he fished within a mile of the launch ramp every day.

“I stayed out there on the main river,” he said. “I mainly targeted trees growing off the bank.”

“I used the spinning outfit most of the time and the casting outfit with the heavier bait when I needed to pitch way up under the trees,” Wright added.

Next up on the FLW Series schedule is a May 31-June 3 stop on Old Hickory Lake near Gallatin, Tenn.