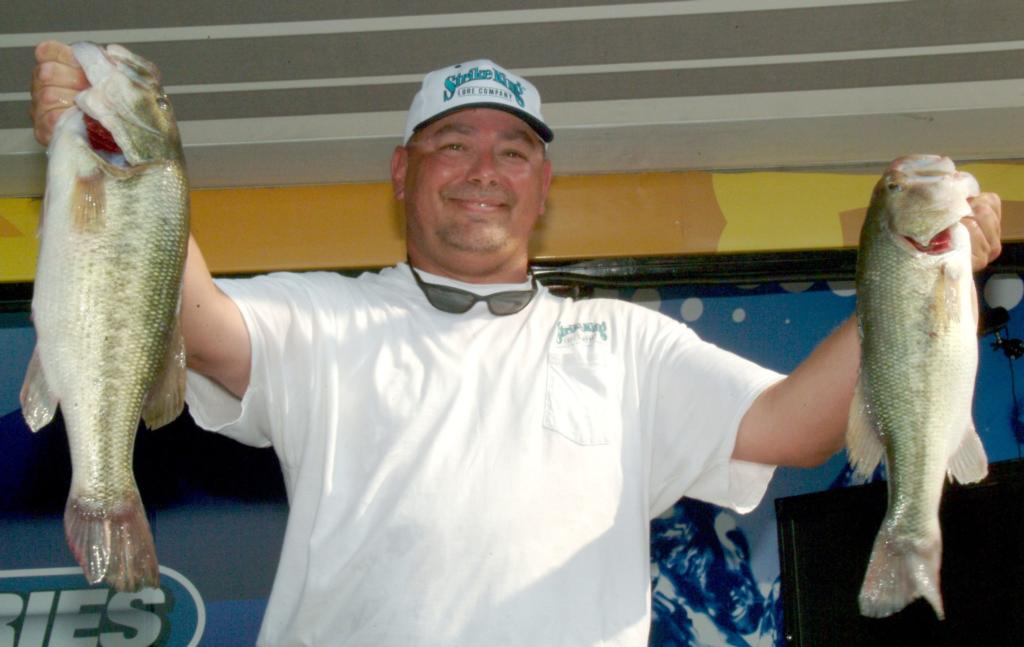 GALLATIN, Tenn. – It’s the time of year when local anglers tend to have an advantage over their out-of-town contemporaries in fishing tournaments, especially on lakes like Old Hickory, where offshore structure is prevalent, and that showed true Wednesday at the Wal-Mart FLW Series.

Though Tennessee anglers make up just 12 percent of the series field, nearly half of the top 10 are from the Volunteer State.

Locals tend to have the advantage in the postspawn because they know the subtle, offshore sweet spots that fish congregate on to feed up after leaving the bank.

Sam Lashlee of Camden, Tenn., who leads the event with 16 pounds, 6 ounces, has been fishing Old Hickory for the better part of 30 years, so he knows a good spot or two on the Cumberland River impoundment.

“In another week or two, locals will have a real distinct advantage,” Lashlee said of Old Hickory’s fishing conditions. “There are still a few fish shallow, but a majority of them are on the move out deep. And for those of us who have fished the lake awhile, we know where those fish are going.”

Lashlee didn’t catch his fish extremely deep today, but did focus his efforts on offshore gravel bars in 3 to 6 feet of water.

“I’m fishing sweet spots that I’ve found over the years,” he said. “But it’s getting hot, and these fish are moving fast. There’s a good chance they could be on much deeper stuff by the end of the week.”

Ashley Hayes of Rockvale, Tenn., is one of Lashlee’s best friends and team 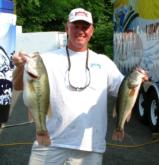 fishing partners, so it’s no surprise that Hayes is nipping at Lashlee’s heels on their home lake with a catch of 15 pounds, 15 ounces.

In fact, had it not been for a dead-fish penalty, Hayes would actually be leading Lashlee by an ounce. What’s even more coincidental about the fishing partners is that they are currently sharing the big-fish lead because each brought in a lunker weighing 5 pounds, 13 ounces.

“When I first met Sam, I hated him,” laughed Hayes. “But then I screwed up and got to know him and realized he is as good as gold. Now we do everything together.”

Hayes found his success today on a single creek ledge in about 10 feet of water with a Strike King Series 5 crankbait.

“There’s a pretty good school of fish there,” Hayes said. “I caught six keepers off it and then sort of laid off and guarded it.”

Like Lashlee, Hayes contends there are always some shallow fish to be caught on Old Hickory, but that this is the time of year when they gang up on the secondary drops in the creeks and primary drops along the main river channel. 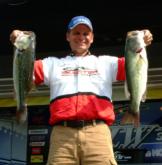 Sean Hoernke of Magnolia, Texas, who finished fourth in the FLW Series on Lake Cumberland, is in third with 15 pounds, 14 ounces.

“I’ve had three top-10s this year, and I’m just fishing well from an intuitive standpoint, which is helpful on a lake like this,” Hoernke said. “I strapped 15 rods to my deck this morning and just went fishing. I caught some deep, some shallow and some on just about every lure I had out.”

“I’ve had to turn off my fishing brain this week and purposely try not to make too much sense out of anything,” he said. “I know that sounds funny – and it feels funny because, as an angler, I want to understand what’s going on – but I haven’t found any groups or congregations of fish, so I’m just fishing by the seat of my pants and fishing what feels good at the time. I’m trying to stay on the move, covering new stuff every hour.”

Gary Clouse of La Vergne, Tenn., is another local atop the leaderboard – fourth

In the fifth position is a tie between Michael Brown of Rocky Face, Ga., and Stacey King of Reed Springs, Mo., each with 14 pounds, 9 ounces.

“I had a terrible practice,” Brown said. “So I tied on a small crankbait this morning and just went fishing. I fished any visible piece of cover I could find in the backs of creeks.”

Brown also noted that he stayed on the move, never repeating any water.

King alternated between shallow and deep for his catch.

“I caught about half my keepers shallow and half deep,” King said. “I’m pretty much junk-fishing: taking a little jig and worm and throwing to anything that comes my way.”

Gregory Jones of Mount Juliet, Tenn., leads the Co-angler Division with a

Jones, yet another local making some noise, convinced day-one partner Ramie Colson Jr. of Cadiz, Ky., to try some of his local hot spots, and the move paid off for both anglers.

“I suggested we try some of my offshore places, where I’ve been catching limits pretty quick in practice, and we started catching keepers immediately,” Jones said. “From there the day just got better. We had an awesome day. He’s one of the most courteous and respectful pros I’ve ever fished with.”

Jones caught his fish on a mixture of worms and crankbaits.

T.R. Fuller of Auburn, Ala., is in second place with 10 pounds, 13 ounces. Fuller fished with local pro Bryan Montgomery of Lebanon, Tenn., and used a Texas-rigged Zoom Ol’ Monster to amass his catch.