Locals cool off on day two of Wal-Mart FLW Series 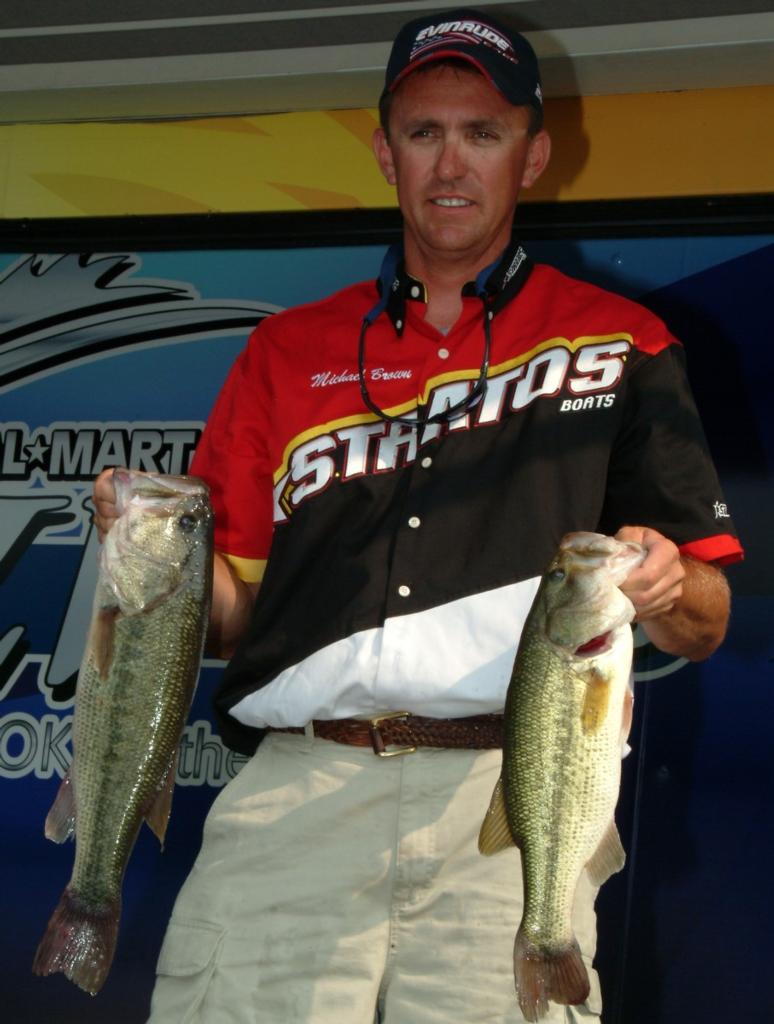 GALLATIN, Tenn. – Temperatures around Nashville cooled off just a bit for the better part of Thursday as did the local pool of fishing talent on Old Hickory Lake.

Michael Brown of Rocky Face, Ga., brought in 12 pounds, 2 ounces to back up his day-one weight of 14-9 and take the lead in the FLW Series event with a two-day total of 26 pounds, 11 ounces.

“What I’m doing is a little strange for this time of year,” Brown said. “It’s early summer, and I’m fishing a classic fall pattern, focusing on the backs of creeks with a shallow-running crankbait. The way I’m fishing, you’d think the leaves would be changing and there would be a nip in the air, but it’s far from that.”

Far from it indeed. Anglers did get some cooler, cloudier weather this morning, but then, at about 2 p.m., the sun came back out, and it turned middle Tennessee into a broiler.

“It was a lot tougher than yesterday,” Brown said. “I only got six keeper bites today, but I still have confidence in what I’m doing because the fish are a pretty decent size when I catch one.”

Brown is trying to fish new water during the day.

“I think the fish will replenish on an object overnight, but not during the day,” he added. “Once I fish something, I won’t revisit it again until the next day.”

Matt Herren of Trussville, Ala., brought in 12 pounds, 8 ounces Thursday to nearly match

his catch of 13-14 yesterday and moved into second place with a two-day total of 26 pounds, 6 ounces.

Herren, a self-proclaimed “river rat” who loves shallow water, is fishing water less than 2 feet deep all day. The trick to catching Old Hickory’s educated fish, he has learned, is to use a very stealthy approach.

“It takes me forever to get to the target I want to fish because I’m approaching the cover so slowly,” Herren said. “The only way I can get a bite is to sneak up on them almost like you would a fish on bed: with the trolling motor on superlow. Then I’m staying way off the cover and making superlong pitches to the target.”

Herren is fishing a Sweet Beaver and an M-Series jig on his flipping stick.

The only local angler among the top five pros to improve his position today was Gary Clouse of La Vergne, Tenn., who moved from fourth to third with a two-day total of 26 pounds, 2 ounces.

“It got a lot tougher on me today,” Clouse said. “Yesterday I probably caught 10 keepers; today I only boated five. I’m sure the fishing pressure is starting to have an effect on the lake, but also they didn’t run as much water, and the lake came up some, which always has more of a scattering effect rather than a gathering effect on the fish.”

Clouse is fishing through a lot of water each day. He fished out offshore Wednesday, but up around the bank more today.

“I really struggled out deep today,” he added. “Once I noticed the water was coming up, I went in close and fished shallow most of the day.”

Woo Daves of Spring Grove, Va., is in fourth place with a two-day total of 25

Daves took advantage of the clouds this morning by scoring big with a topwater lure.

“I got a limit pretty quick on topwater – by 7:30 – and that let me settle down and really go to work out deep with a Zoom Ol’ Monster,” he said. “Once I got to fishing the way I should, I found two other small schools of fish out deeper and culled up four times.”

Day-one leader Sam Lashlee of Camden, Tenn., fell off the pace a bit today, bringing in three bass for 9 pounds and a two-day total of 25 pounds, 6 ounces.

“I probably stayed on my first day’s stuff a little too long today,” Lashlee said. “I didn’t adjust quick enough; I didn’t move out with them like I should have.”

Lashlee vows not to make that same mistake tomorrow.

“I’m going to where I caught them yesterday for just a few minutes to make sure I’m not missing anything, and then I’m going deep,” he said. “As crazy as this sounds, I think the fishing on this lake is getting a lot better somewhere out there. In order to win this tournament, I’m going to have to move out deep; I feel that’s where the mother lode is. So tomorrow, I’m not fooling around near as long with that shallower stuff. I’m going to fish my deep places and hopefully find that mother lode.”

Rounding out the top 10 pros in the FLW Series on Old Hickory:

“Today, I caught a couple on topwater, one on a crankbait and one on the finesse worm,” Arey said. “Those are my three confidence lures here. I caught fish on them in practice and figured that, between the three of them, I should be able to adapt to just about any situation I find myself in on this lake.”

Aaron Fahnestock of Enterprise, Ala., is in second with a two-day total of 17 pounds, 13 ounces.

Pat Hatcliff of Murfreesboro, Tenn., is in third place with a two-day total of 17 pounds, 4 ounces.

Day-one leader Gregory Jones of Mount Juliet, Tenn., is in fourth with a two-day total of 16 pounds, 15 ounces.

Rounding out the top 10 co-anglers in the FLW Series on Old Hickory: