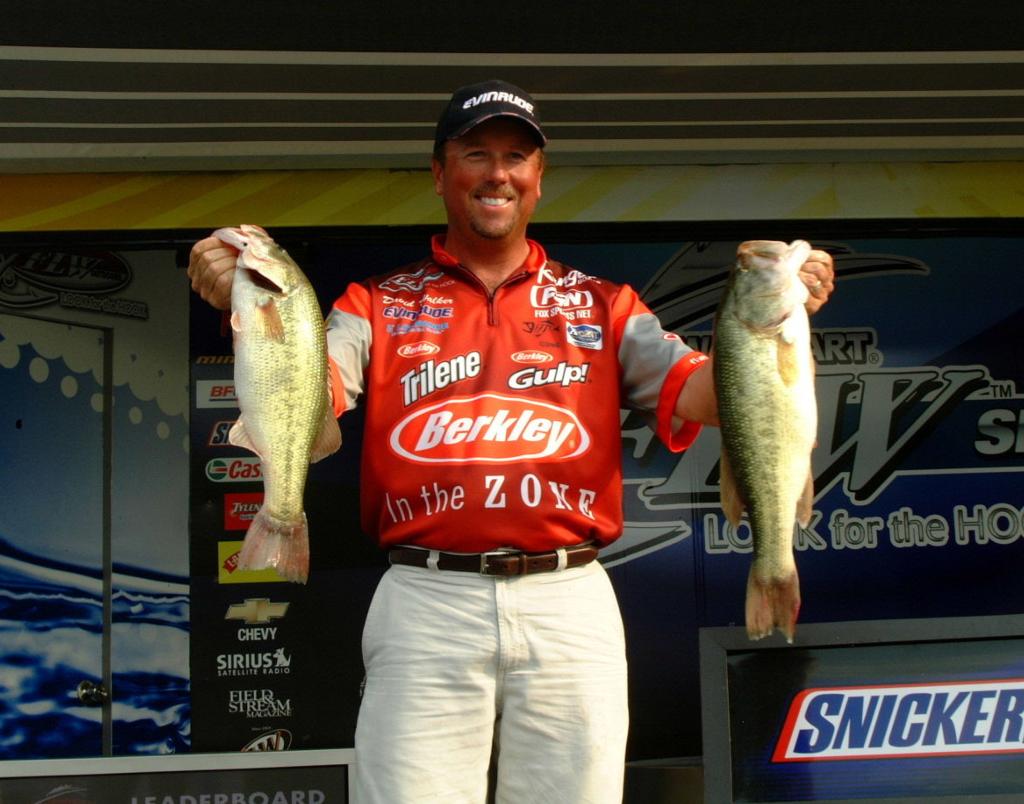 Junk-fisherman’s paradise … Diversity is definitely not one of Old Hickory Lake’s weaknesses. Throughout the first two days of competition, FLW Series anglers have reported catching them every way imaginable. The list currently includes spinnerbaits, crankbaits, jerkbaits, buzzbaits, frogs and finesse worms. These baits have been presented to both shallow and deep water and have been

used on a variety of structure including rock, grass and wood. Sixth-place pro Luke Clausen said he caught six keepers on four different baits. At this point, the only common denominator is the need to cover a big area and keep your bait in the water. “You catch one shallow on a topwater, one off a lay-down on a spinnerbait, one deep on a Carolina rig, and at the end of the day, you really haven’t put much together as to what the fish are doing,” Dan Morehead said.

Happy birthday to you … Last night, Lynn Cox predicted that her husband, Mike, would catch a 16-pound stringer on her birthday. “I think she needs a new crystal ball for her birthday,” said pro Mike Cox, who only managed three bass Thursday that weighed 5 pounds, 6 ounces. Lynn did, however, receive a brief birthday song courtesy of FLW Live, weighmaster Chris Jones and the Gallatin crowd.

Hard luck for Davis … Veteran bass pro Mark Davis caught a five-bass limit, weighing 9 pounds, 9 ounces on day two. While that was a good catch under the circumstances, consider that Davis boated roughly 50 to 60 bass throughout the course of the day on a crankbait. He pounded his area meticulously looking for a big bite. It eventually arrived, but it was pro Terry Baksay’s crankbait that the fish bit. Don’t feel too bad Mark: The kicker only weighed 5 pounds, 15 ounces. Both anglers have a lot to fish for tomorrow; Baksay sits in 17th place while Davis is 46th.

Tough out there today … While the fishing hasn’t been terribly poor, today’s catch was smaller than Wednesday’s. On day one a total of 1,109 bass were brought to the scale compared to 1,043 on day two. It was a slightly more pleasant day with temperatures dropping about 8 degrees from day one, but the overcast skies didn’t help the bite as much as anticipated. Many anglers explained that if the Tennessee Valley Authority would pull water, the fishing would explode. “It’s getting tougher; a lot of people are running over the same cover again and again,” pro Randy Blaukat said.

Walker on a roll … Earlier in the year, fans of professional bass fishing were collectively wondering what had happened to David Walker. One of the most consistent anglers on tour, Walker admittedly struggled out of the gate. His turnaround happened on day two of the FLW Series event on Lake Cumberland. After finishing the opening day in 111th place, Walker rebounded on day two with a five-bass limit that weighed 13 pounds, 7 ounces. Combined with a strong day three, the Sevierville, Tenn., pro finished the Cumberland event in 11th place. Next up for Walker was a visit to Kentucky Lake for a Wal-Mart FLW Tour qualifying event. Walker continued his success, catching 10 bass in the opening round that weighed 36 pounds, 7 ounces. He caught smaller limits the final two days and finished the event in seventh place. This time around, Walker stumbled somewhat out of the gate with 8 pounds, 7 ounces on day one. But on day two, he rallied with an impressive catch of 16 pounds, 10 ounces, which stands as the heaviest single-day catch of the tournament thus far. “It was getting really frustrating,” Walker said. “If you can get that type of experience, where you come back after a having a bad day, then you believe it can happen the next time. I am just now starting to get my confidence back.” Even more impressive is the fact that Walker competed today despite having a painful headache and feeling nauseous. “I could barely get out of bed this morning. I sat on the floor much of the day with my head between my knees. I mostly ran the trolling motor with my hand.”

3: Number of pros in the 200-boat field who have not brought in a bass so far. 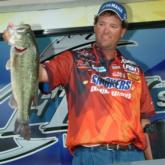 16-10: Weight, in pounds and ounces, of the heaviest limit of the tournament thus far, registered by pro David Walker.

1,043: Number of bass caught by both pros and co-anglers on day two.

“I’d love to win this thing, but I’d rather beat Larry Nixon.” – Pro Danny Pierce, who sits just more than a pound behind The General with a two-day total of 21-5.

“Actually, I’m catching them better when it’s hot. The fish started turning on for me at about 1:30 p.m. when the sun came out. But I was first flight, so I had to head in.” – Chip Hawkins, who caught two bass today that weighed 3 pounds, 10 ounces.

“I got two little areas holding fish where nobody is bothering me.” – Woo Daves, who apparently doesn’t like company on the water.

“These Japanese anglers have taught us a lot. The way they fish now is the way we’ll be fishing in the future.” – Seventh-place pro David Walker.