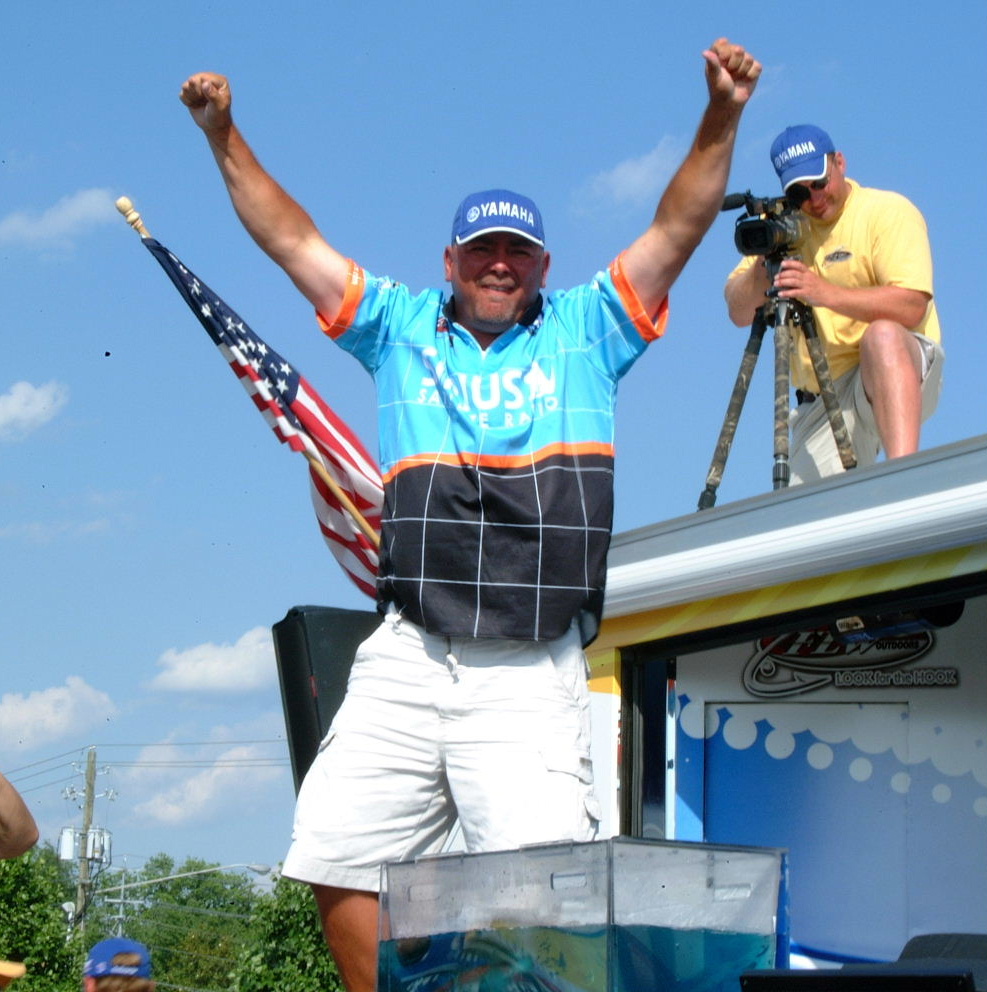 More loot for Luke … A tough bite and little finesse worm – sounds like another huge payday for Luke Clausen. The 27-year-old millionaire cashed another $50,000 this week with a four-day total of 47 pounds, 15 ounces. He must have been flipping or power-fishing, right? Nope, he was throwing a little 6-inch straight-tail worm with a light weight and 8-pound-test line. He used the finesse presentation around a variety of cover including wood, docks and patches of milfoil. “Basically I was just scrambling around, fishing anything that looked good,” said the 2004 FLW Tour Championship winner.

Alleluia, it’s raining T-shirts … Shortly before the start of the day-four weigh-in, members of the National Guard threw out dozens of free T-shirts to a ravenous Gallatin crowd. While the crowd appreciated the free garb, they were more appreciative to the men and women who protect our country. But for whatever reason, the lure of the free T-shirt continues to cause erratic behavior in otherwise sensible people.

Poor Powroznik … For the better part of four days, pro Jacob Powroznik has been the brunt of several jokes. Earlier in the week, David Dudley sold him out, telling everyone that it was his fault that his basketball team lost. Today, it was Woo Daves who took a stab at the young pro.

Daves has known Powroznik since he was a little boy, although that’s not exactly how Daves would describe him. “He was young, but I don’t know if he was ever little,” said the veteran pro. Daves then went on to tell a hilarious story about how he and a few of his fishing friends tricked Powroznik during tournament practice many years ago. After a long day on the water, Powroznik went to bed at about 10 p.m. while the older adults stayed up to watch television. An hour later, Daves woke up Powroznik telling him that it was 6 a.m. When Powroznik went to shower and brush his teeth, the adults snuck into bed. Today, however, the joke was on Daves and Dudley as the Prince George, Va., native finished in third place and earned a check for $40,000.

Clark cleaning up … After mentioning David Walker’s hot streak in Thursday’s column, it would be remiss not to mention Clark Wendlandt’s recent tournament success. After finishing 81st at the Wal-Mart Open in April, a tournament he almost always fishes well on tour, Wendlandt was sitting somewhere in the 80s in relative obscurity in the FLW Tour points race. His next tournament was the FLW Series event on Lake Cumberland. There, Wendlandt put his keen angling eyes to work and went sight-fishing for a seventh-place finish. Then, with a 2006 FLW Tour Championship berth on the line, Clean Shoes put together a solid performance at the Kentucky Lake FLW Tour event, finishing 25th and earning a $10,750 check. With sight-fishing out of the picture at Old Hickory Lake, the Leander, Texas, pro has adjusted his repertoire and found success flipping 5/16-ounce jigs under docks. “I haven’t seen a single person fish the way I was this week,” said the former Land O’Lakes Angler of the Year. “I think I’m fishing with a lot of confidence now.” It is no secret that Wendlandt practices and shares

information with Jasper, Texas, pro Chris McCall. When McCall struggled earlier in the year, he sought advice from Wendlandt, and it clearly worked with McCall setting the Stren Series Central Division on fire. But after speaking with Wendlandt, it appears it was more of a two-way street. “Some of the stuff Chris and I talked about has benefited me just as much as it has benefited him.” It appears the more these Texas pros talk, the better they fish. Somebody cut their phone lines.

Leaderboard shuffle … While the pro winner, Sam Lashlee, took the hot seat in the Wal-Mart boat prior to weigh-in, he didn’t stay there long. For that matter, none of the top 10 pros weighing in Saturday enjoyed a lengthy stay in the front-deck seat. The first pro to weigh in, Gary Clouse, quickly took Lashlee’s spot. After Clouse got comfortable, Western pro Art Berry stepped to the scale and knocked him out. After Berry sat down, Powroznik wasted little time and dethroned him. At this point, the hot seat resembled more of a revolving door than anything else. Finally, Powroznik’s 13-pound, 5-ounce limit was heavy enough to stave off Matt Herren and end the game of leaderboard shuffle.

0: Number of pros that failed to bring a five-bass limit to the scale Saturday.

0: Number of fish out of 50 that died Saturday.

100,000: Number of dollars that Lashlee earned in his first tour-level event.

8: Position on the leaderboard where No. 3 pro Powroznik started the day.

“I’m just a country boy living a dream.” – Lashlee, while sitting in the hot seat waiting for the other nine competitors to weigh in.

“I want to thank FLW for coming out here and giving me the chance to fish against these guys. Larry Nixon, I had a picture of him on my bedroom wall.” – No. 8 pro Clouse, on competing against legends like Nixon and Mark Davis.

“You just drenched me man.” – Tournament Director Chris Jones, talking to Powroznik shortly after he laid his lively five-fish limit in the aquarium.

“The biggest key on this lake is to slow down. There are a lot of people who fish the same cover, so make each cast count.” – No. 6 pro David Walker.

“This is the strongest field of fishermen I’ve ever competed against.” – Clausen, who later had his thoughts echoed by Daves, the No. 10 pro.

The next event of the $6.5 million FLW Series season is slated for Oct. 11-14 on Lake of the Ozarks in Osage Beach, Mo.