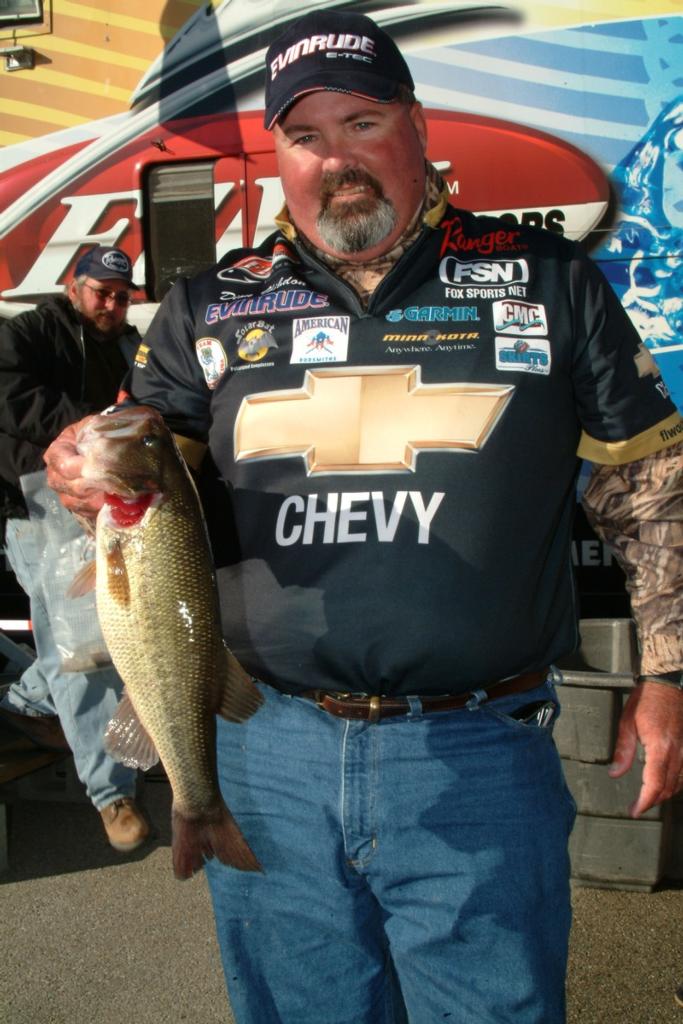 Here come the Hibdons: Thanks to a little fatherly advice from father Guido, Dion Hibdon of Stover, Mo., took the lead of the Wal-Mart FLW Tour Series event at Lake of the Ozarks on day two with a two-day total of 37-11. Photo by Rob Newell. Angler: Dion Hibdon.
October 12, 2006 • Rob Newell • Uncategorized

OSAGE BEACH, Mo. – The sky does not get much bluer than it was Thursday at Missouri’s Lake of the Ozarks during day two of the Wal-Mart FLW Series.

Local pro Dion Hibdon of Stover, Mo., felt some of that blue-sky feeling this afternoon as he dropped another 16 pounds, 2 ounces of bass onto the scale to take the tournament lead with a two-day total of 37-11.

“It wasn’t blue skies for me all day, though,” Hibdon said. “I had a black cloud follow me around till about 11 o’clock when I had just one 12-incher in the well. At about noon I ran into dad (Guido Hibdon), and he clued me in to what to do. For the next couple of hours, I caught them pretty good. I caught my three best bass in the last 30 minutes of the day.”

Just in case you were wondering what words of wisdom the elder Hibdon bestowed upon his son, for publication purposes we will go with, “Lighten up your jig and get your hind end out of the wind.”

“And he was right,” Dion chuckled. “I had been out there fighting that wind all morning – and I was getting bites – but I couldn’t feel them for the wind. By the time I figured out I had a bite, the fish would spit that heavy jig.”

As Dion fought the wind with a big, heavy jig, Guido was sacking 18 pounds, 3 ounces of his own in the calmer pockets on the lake.

“That’s where he’s smarter than me, you see,” Dion laughed again. “I’m hard-headed, but he doesn’t fight it anymore, he just goes with the flow.”

After going to a lighter jig and calmer areas, the bite picked up considerably for Hibdon.

“They were the same kind of deep places – 20-plus feet deep – but they were just more protected,” the younger – and now a little wiser – Hibdon added.

Lefebre falls back by 2 1/2 pounds

“I picked up where I left off yesterday and kept expanding the pattern,” he said. “After yesterday, I thought I could make the pattern work just by looking at my map, but I was wrong. I have to run into each place and visually scan the bank for what I’m looking for.”

Exactly what that is, Lefebre is not saying, though he did say at least some portion of his catch is coming on a Mizmo jig.

Given the incredible fish-catching year Steve Kennedy of Auburn, Ala., has had on all circuits this season, many knew it would only be a matter of time before he surfaced into the top 10 at Lake of the Ozarks, and today was the day.

Sacking the day’s biggest weight – 19 pounds, 9 ounces – the red-hot Alabama pro zipped up into third place with a two-day total of 35 pounds.

“I was on a buzzbait deal in practice, but that went away with the 2-foot rollers yesterday,” Kennedy said. “It took me until about 10 o’clock yesterday to figure out they were biting a jig. So I started with a jig this morning, and the big ones were biting it right off the bat.”

Kennedy noted he caught most of his weight before 9 a.m. and that he is running and gunning a 15-mile stretch of the lake.

“I’m fishing bluff ends, points and whatever looks good,” he said. “I’m pitching the jig up to the bank and just dragging it down into about 6 or 8 feet of water.”

Andy Morgan of Dayton, Tenn., does not boast about much, but over the

last year, he has been proud of his own patience in learning how to finesse fish with a spinning rod.

Today he used that spinning rod to salvage 12 pounds, 12 ounces to keep himself in the top five with a two-day total of 33-14.

“I never thought I’d brag about using a spinning rod, but two years ago this kind of post-frontal day would have sent me to the bottom of the (standings) sheet,” Morgan said. “I caught two decent fish on my `power tools’ early this morning, and when that sun got up and the bite got tough, I dug out my 822s (G-Loomis spinning rods) and seined back through the area and caught three more keepers.

“It feels good to have the confidence to change when conditions warrant it.”

Matt Herren of Trussville, Ala., moved up a spot to fifth place today thanks to a 17-pound, 3-ounce catch for a two-day total of 33-14.

Herren is fishing what he calls “a classic fall pattern” along creek channel bends.

“It’s the time of the year when bait starts migrating back into the creeks, and I’ve located a couple of sweet spots where bass are ambushing these migrations,” Herren said. “The best part is, from what I’ve seen between yesterday and today, these bass are loading back up on these spots daily.

“I’m having to switch up baits to make them bite,” he added. “Yesterday was buzzbaits and spinnerbaits; today it was more crankbaits and jigs.”

Rounding out the top 10 pros in the FLW Series event after day two at Lake of the Ozarks:

David Lawson of Richmond, Ky., took the lead in the Co-angler Division with five

Lawson, who won the Wal-Mart FLW Series event on Lake Cumberland in May, is now in a position to win his second FLW Series co-angler title in the same season.

All Lawson would reveal about his technique this week is that it’s the same exact bait he used at Cumberland.

At that tournament, Lawson employed his No. 1 confidence lure, a 3/8-ounce Stan Sloan jig.

Day-one co-angler leader, Gayle Julian of Bakersfield, Mo., brought just one fish to the scales for 2 pounds, 9 ounces. But since Julian sacked 19 pounds yesterday, the slip only dropped him to second place with a two-day total of 21-9.

In third place is Princeton, Kentucky’s Tad Ladd with a two-day total of 20 pounds, 5 ounces.

Bill Gift of Alix, Ark., captured 15 pounds, 5 ounces today to jump into fourth place with a two-day total of 18-8.

And Bud Strader, father of the famed Tennessee Strader clan, is in fifth place with a two-day total of 33-14.

Rounding out the top 10 co-anglers in the FLW Series event after day two at Lake of the Ozarks:

8th: Gilbert Herald of Pittsburg, Texas, with a two-day total of 16-12

The big bass in the Co-angler Division now stands at 5 pounds, 13 ounces, caught by Roger Boenecke of Eldon, Mo.