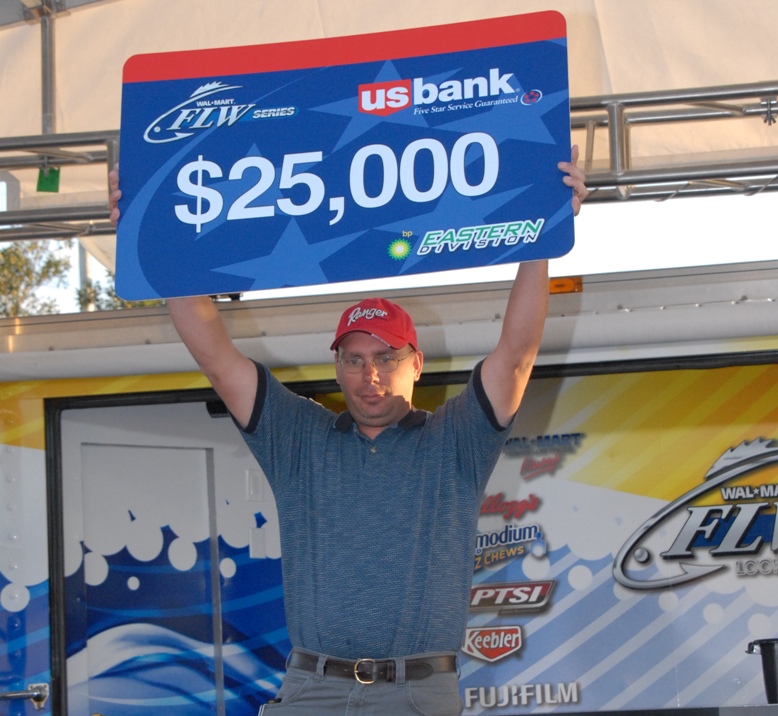 This makes Fabiszak’s third major win as a co-angler. He has also won Stren Series Midwest events on the Mississippi River and Kentucky Lake.

“This feels pretty good,” said Fabiszak, a 37-year-old ceramic tile installer. “I’m going to put this money in the bank and save it.”

The Indiana co-angler shared a boat with pro Jason Knapp of Uniontown, Pa., today to catch his day-three weight of 9 pounds, 2 ounces.

“I used the Ace most of the week,” he said. “But today, Jason made one last stop before we came in, and I caught my two biggest fish on the Cane Toad in the last 30 minutes.”

Blaylock got off to great start of day one when he caught an 8-pound bass while fishing with pro David Walker.

“I caught that big one right off the bat on a black-and-red flake tube,” Blaylock said. “And that got rolling.”

Today he fished with pro Timothy Little, throwing a Kinami crankbait in canals to catch a limit weighing 10 pounds, 7 ounces.

“I had one other big one and it came off, but that’s the way fishing goes,” he added.

Jess Caraballo of Danbury, Conn., finished third with a three-day total of 22 pounds, 13 ounces and collected $9,000.

Mark Phillips of Fayetteville, Ark., finished fifth with a three day total of 21 pounds, 13 ounces for $7,000.

Tony Haymon of Penney Farms, Fla., landed the Snickers Big Bass of the day in the Co-angler Division that weighed 9 pounds, 9 ounces.