Alabama pro comes from behind for surprise victory in FLW Series 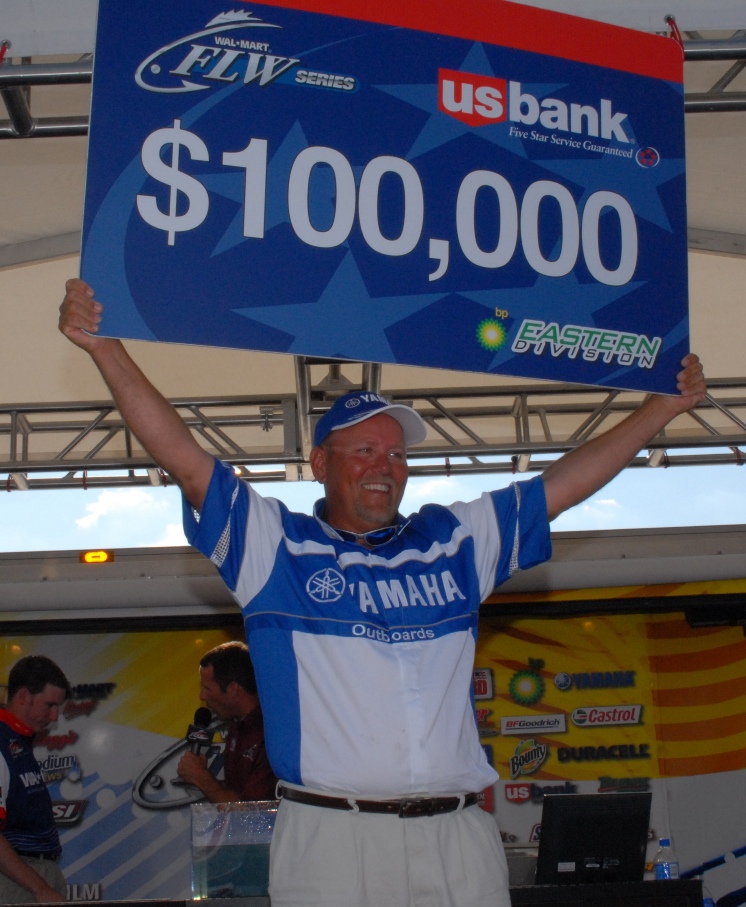 RUSSELLVILLE, Ark. – When Matt Herren of Trussville, Ala., weighed in 15 pounds, 11 ounces and took his seat in the Wal-Mart leader boat, he felt like his time there would be temporary.

Coming in to the final day of the Wal-Mart FLW Series BP Eastern event on Lake Dardanelle, Herren was 4 pounds off the lead and figured he was fishing for third or maybe second place.

Still behind him to weigh in was David Lawson, tournament big stick David Walker and legendary Larry Nixon.

Then Walker dropped 12 pounds, 12 ounces into the scales and couldn’t knock him off the leader seat.

Then Nixon, with momentum on his side, and not to mention a rousing home-state crowd, took the stage.

One by one Nixon put his fish in the scales as the tension mounted. And Herren knew what was coming next. He had seen Nixon stick the knife in the hearts of too many other anglers in the same exact situation.

Sure enough, Nixon pulled out his kicker bass. The crowd roared. He put his biggest bass in the scales, but the final weight left Nixon 5 ounces short of victory.

No one was more shocked and surprised than Herren himself. He had just watched his first national-level, $100,000 victory unfold before his very eyes, and he never even saw it coming.

“I’ve been told that when you win your first one, it happens when you least expect it,” said an elated Herren. “Now I know what they mean. I honestly never had a clue. From my first cast in practice until Larry put that last fish in the basket, I had no idea. All week I’ve just been focused on one thing: fishing the best I possibly can. I’m still stunned.”

In fact, Herren did not realize the potential of the fish he had found in practice until the second day of the tournament.

“I fished all over the place the first day,” Herren recounted. “Then the second day, I made a pass down one stretch that produced a couple of good keepers the day before, and I caught four quality fish off it. And I still didn’t think much of it.

“Then, late the afternoon of the second day, I made another pass through there and caught four more quality fish again – and that’s when the light bulb came on – I knew I needed to spend more time on this spot on the third day.”

Herren essentially camped on the spot – located less than a mile from the ramp – on days three and four.

“On day three, I really started to understand the area and what was going on,” he continued. “The spot was at the intersection of the main river and a major creek channel. At night, when they backed the water up, the mud of the river would push back up onto the flat point where the two channels came together.

“But later in the day, when they started pulling water, it would pull a vein of clear water out of that creek and across the flat, and that’s when the fish would load up in there. It was a neat deal.”

In terms of lures, Herren milked the area with a variety of lures including a jig, a Sweet Beaver, a Method crankbait, a Lucky Craft RC 1.5, a shaky head, a ChatterBait and a spinnerbait.

“Every pass I’d throw something different, and the funny part was they would fire up on one bait for about an hour, and then it would go dead. Then I’d start switching lures again, and bingo: They would bite something completely different for the next hour.

“Yesterday I threw a jig until I was blue in the face and never got a bite on it. Today I caught my first five fish on a jig. It wasn’t about lures or presentations – it was all about the area.”

Herren now goes down in the record books as an FLW Series winner on Lake Dardanelle with a four-day total of 62 pounds, 10 ounces.

One can only imagine the disappointment Larry Nixon of Bee Branch, Ark., felt when he came up ounces short of winning his fourth FLW event.

He finished runner-up with a four-day total of 62 pounds, 5 ounces.

“I’m not real happy about this,” Nixon said candidly. “You don’t get these opportunities very often, and to let one slip by me like this makes me mad. I didn’t lose any fish today that I can say cost me the tournament, but that doesn’t change the fact that I don’t like losing.”

Most of Nixon’s catch this week came on a 10-inch blue-flake Berkley Power Worm and a 7-inch green-pumpkin Power Shaky Worm – both Texas-rigged with a 1/4-ounce weight.

His main pattern was fishing a shell bed adjacent to a grass bed, and he followed the fish back and forth between the two depending on the water levels and clarity. 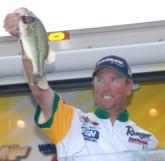 What makes Walker’s finish such a blow was he saw the tournament-winning fish come up and inhale his swimbait, but he swung too fast and didn’t get a hook in it.

“I was just a little too jacked up this morning,” Walker said. “I saw the fish come at it from the side and clobber it. And instead of dropping my rod for a half a second and letting her turn with it, I just snatched, and that one mistake cost me the tournament.”

Walker spent the week fishing grass beds in a big bay in the lower end of Dardanelle.

“My lure selection evolved throughout the week,” he said. “I started by swimming a 3/8-ounce jig with a Berkley Chigger Craw the first day. Then the second day I went to a weightless Sinking Minnow. The third day I noticed the shad were spawning in the grass, so I pulled out a swimbait and they bit that pretty good.

“The swimbait was going to be my go-to bait today, but the water dropped dramatically out of my area, and the grass wasn’t right anymore, so I had to go back to the lighter baits.”

Lawson spent the week fishing a jig on a deep drop and caught some of the deepest fish reported in the tournament.

Young fishing sensation Derek Remitz of Madison, Ala., has torn up the BASS Elite Series 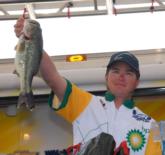 this year and decided to come over and collect a few of the FLW Series’ dollars this week.

“I just strapped 10 rods on the deck and went fishing,” Remitz said, making tournament bass fishing sound as easy as a stroll to the mailbox to retrieve the mail.

“I didn’t try to make it complicated; I just went into Shoal Bay and went fishing. This lake completely fit my style of shallow-water fishing, and it was a lot of fun. I keyed on steeper banks with a little rock, grass and wood mixed in.”

Rounding out the top 10 pros in the FLW Series Eastern on Lake Dardanelle: