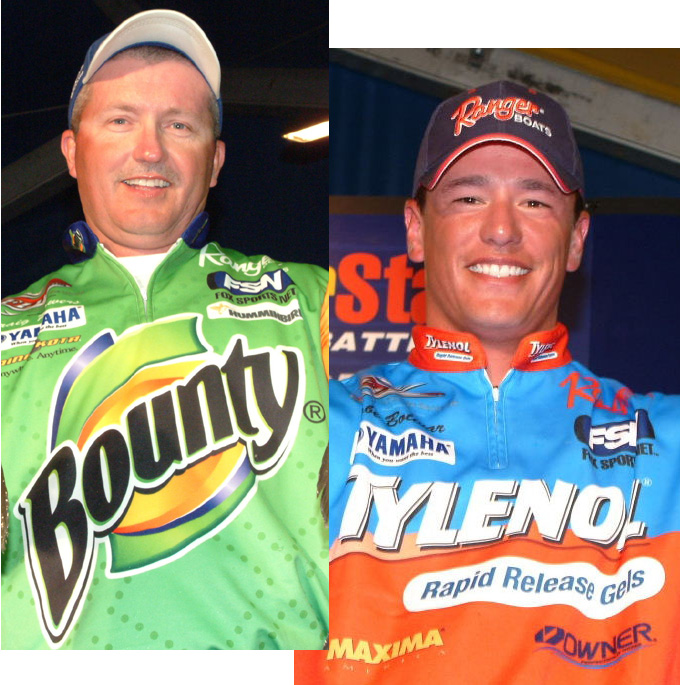 In keeping with the Wal-Mart FLW Tour’s schedule of mostly new fisheries in 2007, fresh faces continue to stake out wins in sponsor-team competition. Lake Norman provided an overall return to form for teams in both divisions after a rough go at Fort Loudoun-Tellico lakes, and two teams capitalized to notch their first wins in this unofficial competition.

North Carolina’s Lake Norman offered tour pros a veritable smorgasbord of opportunity in terms of bringing bass into the boats: sight-fishing, walking topwaters, dead-sticking weightless plastics and pitching jigs to docks were just some of the techniques employed by achieving anglers. And sponsored pros were well represented among the biggest earners at the late-April event. In fact, seven of the top 10 finishers earned big points for their respective sponsor teams, including winner Larry Nixon, one of Team Chevy‘s legends of bass fishing.

Searching for wins since joining the ranks of sponsored teams on the FLW Tour in 2006, Team Bounty laid claim to a Division I win at Norman, while Division II’s Team Tylenol Rapid Release also broke the win barrier in commanding fashion. A trend is emerging in sponsor-team competition in 2007, as every event winner in both divisions thus far has picked up a first win: Two brand-new teams were victorious at the tour’s season opener; and second-year teams have notched first wins at tournament Nos. 2 and 3. Will the trend continue as the FLW Tour heads back to familiar territory for the Wal-Mart Open this week? Check back later this month to find out.

Like in years past, sponsor teams are divided into two divisions: Division I, comprising teams of three or more professional anglers, and Division II, comprising teams of fewer than three pros. Keep tabs on your favorite teams’ progress as they compete May 17-20 at stop No. 4 of the 2007 season: Beaver Lake, a perennial destination on the FLW Tour. If you’re not in northwest Arkansas to see the bass-fishing action unfold in person, you can keep an eye on the anglers via FLWOutdoors.com’s live weigh-in application, FLW Live.

Look for results from Beaver Lake in late May. Results from Lake Norman, as well as an explanation of team scoring, are detailed below:

Bounty blasted past current standings leader and Lake Norman runner-up Team Duracell by nearly 11 points for the win. Those points are particularly valuable for Bounty, which now sits only a dozen points behind Duracell in the overall standings, setting the stage for a potential takeover of the top slot – occupied by the battery powerhouse since the season began – after Beaver Lake.

Bounty’s impressive showing at Norman represented a true team effort, with all anglers finishing in the top quarter of the field. Pro Craig Powers of Rockwood, Tenn., anchored the group, nailing down a solid 18th-place finish. Had all members of Team Bounty not fished their A game, however, they would have succumbed to the skills of Duracell’s Michael Bennett of Roseville, Calif., currently leading the 2007 Angler of the Year race, and Andy Morgan of Dayton, Tenn., who posted seventh- and 12th-place finishes, respectively.

It was Ramona, California’s Gabe Bolivar who stepped up to the plate for Tylenol Rapid Release, using his impressive ninth-place finish to handily box out runner-up Team Wal-Mart by 16 points. 2005 FLW Tour Championship winner George Cochran of Hot Springs, Ark., was able to push Wal-Mart three rungs up the standings ladder by finishing 25th.

Points in the 2007 sponsor-team race will be earned during the FLW Tour’s six qualifying events and monitored throughout the season. Standings are based on the average number of points earned by a team’s anglers as assigned in the tour’s Land O’Lakes Angler of the Year competition.

Sponsor teams competed in the most recent FLW Tour tournament at Lake Norman near Charlotte, N.C., and results from that event have been tallied:

Division I – Lake Norman (teams with three or more anglers)

Current overall standings for sponsor teams competing on the 2007 FLW Tour have been tallied:

Division I (teams with three or more anglers)