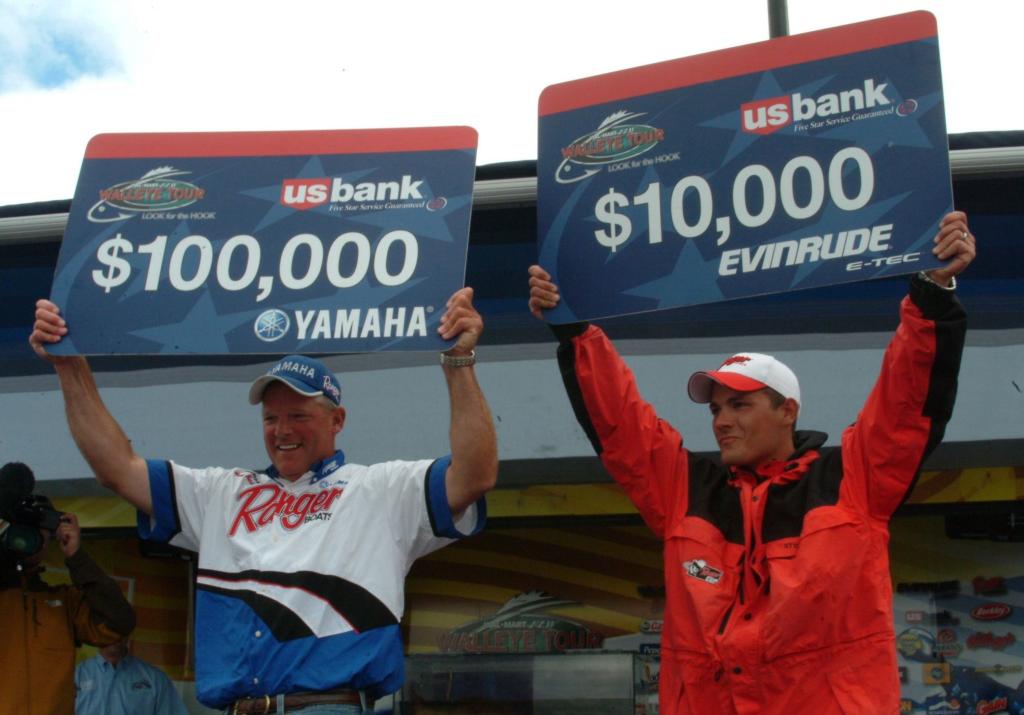 ESCANABA, Mich. – With only two walleyes on day four, Trent McLaughlin bested 149 other fishermen and won the Co-angler Division of the Wal-Mart FLW Walleye Tour event on Bays de Noc. In his first-ever tournament with FLW Outdoors, McLaughlin earned a check worth $10,000.

McLaughlin was in first place going into the final day of competition, paired with pro leader Steve Vande Mark. Although they only brought in two fish, both were pigs, weighing a total of 18 pounds, 3 ounces, pushing McLaughlin’s four-day total weight to 63 pounds, 10 ounces. Both walleyes were caught trolling crawler harnesses near Garden Peninsula in Big Bay de Noc. 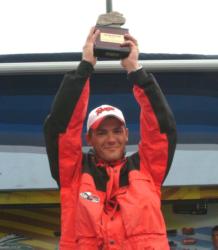 The Hays, Kans., angler finished off a surreal week with four of the best professional walleye anglers in the world.

Asked to capture his emotions in words, McLaughlin said, “I feel like, How in the heck do you draw Troy Morris, Scott Fairbairn, Jason Przekurat and Steve Vande Mark?” McLaughlin’s pro partners finished the tournament in third, 48th, fourth and first, respectively.

“I netted the fish that sealed the Angler of the Year title for Jason Przekurat on day three,” said McLaughlin, as he proudly donned a Ranger cap with the signatures of his fishing partners. “I’ll remember this forever.”

Although he’s an FLW rookie, McLaughlin is no stranger to competitive walleye fishing. He has fished several walleye tournaments in his home state. In two of the three tournaments this year on the Kansas Walleye Association circuit, he finished in the top 10 and top 20 as a boater. McLaughlin has also prefished for several Walleye Tour and PWT tournaments the past seven years with his uncle, pro 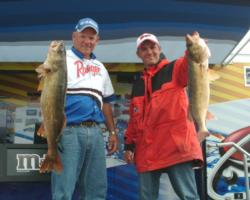 Terry Wilson, who finished 30th in this tournament. He planned to do the same at Bays de Noc until Wilson called about a month prior to the event and said his daughter wouldn’t be able to fulfill her co-angler spot. McLaughlin eagerly stepped up to the challenge.

“My check today will fund my entire next year with the Kansas Walleye Association.”

The one-hit wonder hopes to fish at least one Walleye Tour tournament next season as well.

John Hammond sneaks past his father

Coming in second for the co-anglers was the second-ranked co-angler of the Wisconsin Division of the FLW Walleye League: John Hammond of New Berlin, Wis. He began the final day in fifth place and moved up to second via a 13-pound, 14-ounce catch after a day on the water with young pro Kelly Klemm. Hammond finished the tournament with 50 pounds, 5 ounces, earning a purse of $7,500. 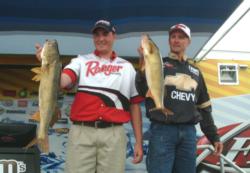 This tournament was bittersweet for Hammond, as he edged out his father Roy Hammond, also of New Berlin, Wis., who placed sixth. Roy and John were in third and fifth place, respectively, coming into day four. Roy suffered from a heart attack in late January of this year. Visibly emotional, John spoke about his father onstage: “That meant he wasn’t able to ice-fish all year. Now he comes out here and fishes a four-day tournament with no problems. It’s amazing.”

Jim Plummer of Fairborn, Ohio, added to his impressive fishing resume by finishing third with a four-day

Plummer is no stranger to competitive fishing, as he has also competed in the FLW Tour, Stren Series, Bass Fishing League and Walleye League. He has fished 94 bass tournaments since 1995 and 10 walleye tournaments since 2003, all with FLW Outdoors. 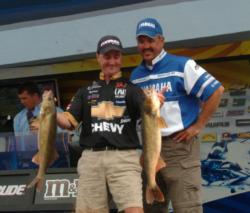 Co-angler Kevin Kerkvliet of Maplewood, Minn., and pro Tom Keenan brought two fish to the scales on the final day, weighing a total of 12 pounds, 1 ounce. With those two “overs,” Kerkvliet earned fourth place in the Bays de Noc tournament, a check for $2,500, 11th place in the co-angler standings and a trip to Cleveland for the no-entry-fee championship in September.

No `bull ride’ for Booghier

Fifth place went to Larry Booghier of Lakeview, Ohio, who only managed one walleye Saturday, weighing 3 pounds even. His four-day cumulative weight was 44 pounds, 3 ounces, which earned him a check for $3,000. 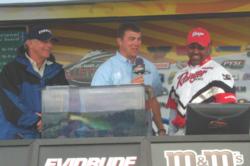 The rough waters and long runs were not kind to Booghier’s back, which forced him to return to shore early with the FSN camera crew.

“Those PBR (Professional Bull Riders) guys think they’re tough, and they only have to ride for 8 seconds,” stated the sore angler, who was in surprisingly good spirits. “We had to ride for three hours.”

Rounding out the top 10 co-angler finalists at the FLW Walleye Tour event on Bays de Noc: