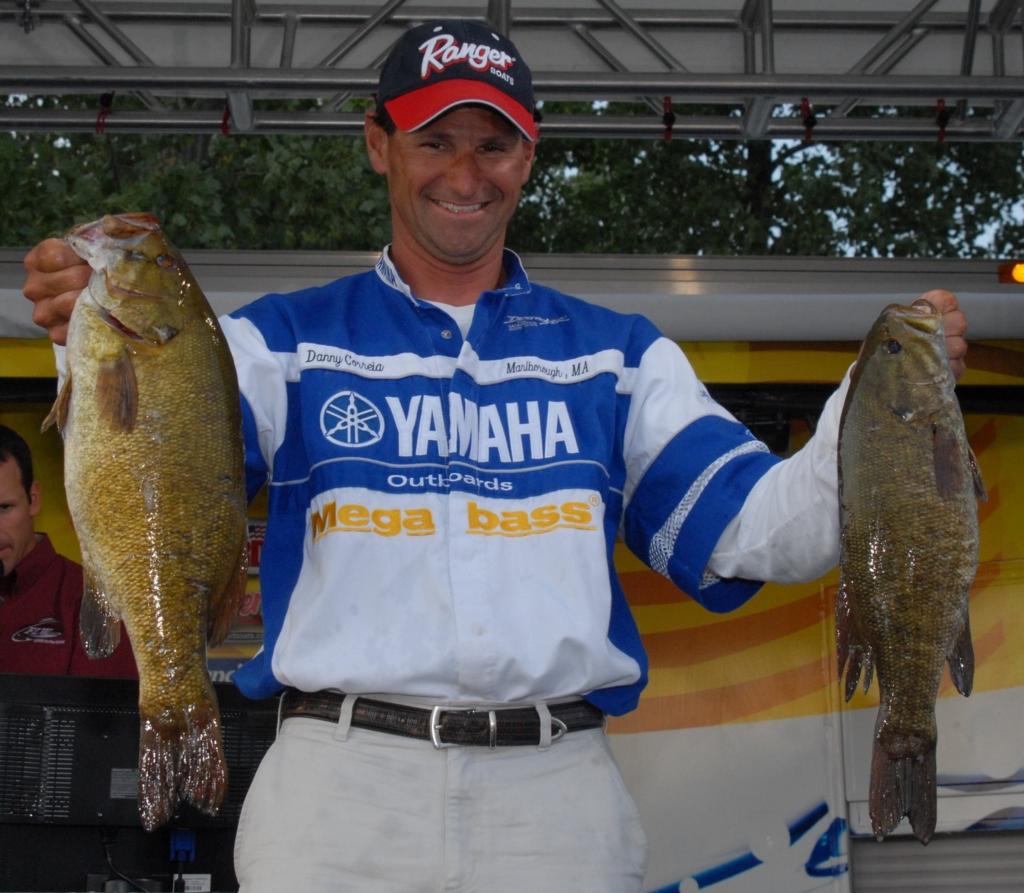 PLATTSBURGH, N.Y. – South winds of some 15 to 20 mph kicked up on Lake Champlain on day two of the Wal-Mart FLW Series BP Eastern event to make things much bumpier than the calm conditions anglers experienced on day one.

Long runs to the south for largemouths were rough-and-tumble and bore little fruit for those pros who had the audacity to set sail nose-first into 5- and 6-foot waves.

Instead, smallmouth bass became the star species at this afternoon’s weigh-in.

And the star of the smallmouth show on Lake Champlain became Danny Correia of Marlborough, Mass., who now leads with a two-day total of 37 pounds, 7 ounces.

Correia answered his 20-pound, 6-ounce limit from day one with 17 pounds, 1 ounce today.

Correia, who cut his fishing teeth years ago by ripping large spinnerbaits on Lake Winnipesauke for giant smallies, is using that technique plus one of his other favorite tactics – drop-shotting – to bag his smallmouths north of Plattsburgh.

“Big spinnerbaits and drop-shots,” exclaimed Correia with his big ubiquitous grin. “Those are my two favorite techniques, and I’m using them together to catch these fish. I’m only catching eight or nine fish per day, but they’re all big ones.”

Correia has two primary spots that have produced his limits. One is a shallower spot where he is ripping his spinnerbait, and the other is a deeper edge where he employs the drop-shot.

“The spinnerbait spot has been the better spot; I caught four of my best fish off it today” Correia said. “But it’s in a popular area and several guys have seen me there, and it’s starting to get pressured now. My drop-shot spot is a little less obvious, and it has some good ones on it too; that’s where my co-angler bagged 19 pounds yesterday.

“Both spots have big fish on them, but I’m really going to milk the spinnerbait spot hard tomorrow since several guys are all over it now,” he added. “I’m going to get all I can from it, and hopefully the drop-shot spot will bail me out if I need it.”

Though Kreiger had one largemouth in his bag today, he has been relying heavily on smallmouths for a two-day total of 37 pounds, 4 ounces.

“I caught most of my weight pretty early,” Kreiger said. “By about 10:30 or so it just got too rough to stay up there, and I didn’t want to punish my area anymore, so I backed off and started working a secondary largemouth pattern, which did help me cull up a bit.”

For his smallmouths, Kreiger said he is using jerkbaits and tubes.

“The last two days, I’ve lost some pretty good largemouths on that secondary pattern,” he added. “If I could ever get a couple more of those in the boat, it would really help the cause.”

Wolak’s day-two limit of 17 pounds, 1 ounce was anchored by a 6-pound, 2-ounce heavyweight largemouth, which also claimed the big bass of the day in the Pro Division.

Wolak weighed in two smallmouths and three largemouths today and had a mixed bag yesterday as well.

“I’m mixing it up, smallies and largemouths,” Wolak said. “I went to my smallmouth spot early, caught four and left. That was kind of a gamble to leave without a limit, but it started to get windy and rainy, and I felt I needed to take a chance on those largemouths before it got too bad. It paid off, though, and I was able to cull out a few smallies with those largemouths, so it worked out well.”

Kellogg’s pro Clark Wendlandt of Leander, Texas, moved up a spot into the fourth-

place position with a two-day total of 36 pounds, 5 ounces.

“One thing I’ve figured out about these fish and the way I like to fish for them is that I need fresh water to go to every day,” Wendlandt said. “I can’t go milk all my best spots in the first two days and then expect them to produce the next day or two. I’m sure there are still some fish on those places if I wanted to drag around for them, but that’s not what I like to do here.

“I’ve saved about half my water for the next two days,” he added. “I have not even visited some of my best water yet. Now there might be boats on them or the fish might not be there, but I always do better here when I leave myself some fresh water to go to in the final days. Fishing water that I’ve already burned up the first couple of days is a dead end for me.”

Hibdon had “one of the most frustrating days on the water ever” due to his batteries shorting out this morning, which caused him to lose power to his trolling motor

“I decided to let my fish up here rest for a day, and I ran south to use up some good largemouths I found on docks in Mallet’s Bay,” Hibdon said. “Well, something happened with my batteries in all that rough water and my trolling motor was done at about 10 o’clock. So I just kind of drifted around and made the best of what I had.”

Rounding out the top 10 pros in the FLW Series Eastern Division event on Lake Champlain:

Eastern Division on Champlain with a two-day total of 32 pounds, 6 ounces.

“We were fishing deep breaks, ledges and humps with weedlines, but the wind was so bad the drift socks wouldn’t slow us down enough to fish our drop-shots,” Dubroc said. “So I switched to a Carolina rig with a ¾-ounce weight and a Zoom Ultravibe speed craw, and it really worked. I ended up with seven keepers.”

Lynn Baciuska of Afton, N.Y., held on to his second-place position from day one with a 12-pound catch today for a two-day total of 29 pounds, 2 ounces.

Local co-angler Jason Perry of Plattsburgh, N.Y., is in third place with a two-day total of 29 pounds, 1 ounce.

Dana Perrotte of Winooski, Vt., is in fourth place with a two-day total of 28 pounds, 1 ounce.

Mark Phillips of Fayetteville, Ark., is in fifth place with a two-day total of 27 pounds, 9 ounces.

Kurt Chelminiak of Delafield Wis., caught the big bass in the Co-angler Division on day three weighing 5 pounds, 8 ounces and worth $290.

Rounding out the top 10 co-anglers in the FLW Series Eastern Division event on Lake Champlain:

Day three of the BP Eastern event begins Friday morning at 6:30 from the Dock Street Landing located at 2 Dock St. in Plattsburgh.