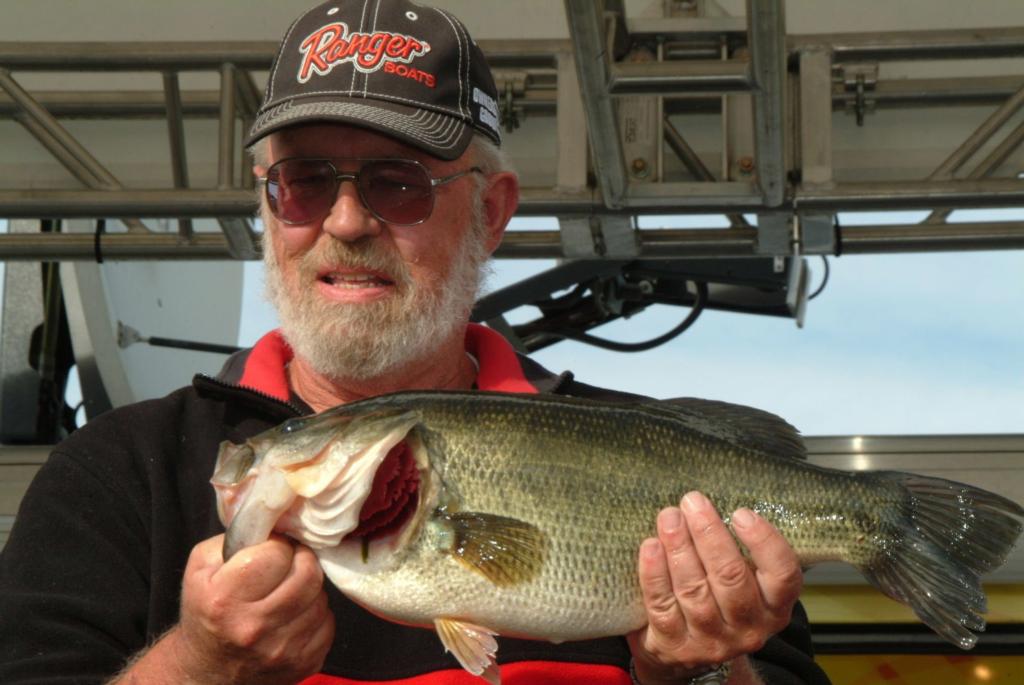 So why are they all fishing for smallies? … The big-bass award for the day – and the week, so far – went to co-angler Mike Marsh, who landed a 7-pound, 5-ounce Columbia River whale Thursday. The unique part? It was a largemouth, which was a refreshing sight at a tournament where well over 90 percent of the fish weighed in are smallmouths. Also of note, Marsh caught the big bass on a little-bitty bait: a drop-shot armed with a wacky-rigged Zoom finesse worm. 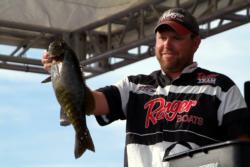 Oh, that’s why … Yes, Marsh’s largemouth was the biggest, but the smallies weren’t anything to sneeze at, either. Anglers weighed in numerous 4- and 5-pound bronzebacks for the big-bass award in both divisions, topped off by Jon Neudorfer’s 5-pound, 7-ounce big-bass winner on the pro side. Yesterday, nobody broke the 5-pound barrier for big fish, but today, there were more 5-pound smallies than you could count. 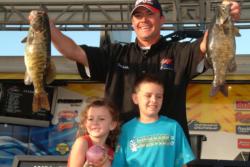 Rough week … Pro Jason Borofka weighed in a couple fish worth 2-8 Thursday, but he was just happy to be able to come to the scale. On his morning run, his motor sheered off at the jack plate and caused a harrowing breakdown for him and co-angler Duane Dunstone. “We were going 50 mph when I heard a noise and looked behind me,” a visibly shaken Borofka said at weigh-in. “The motor came completely off and just went flying. It was going all by itself right next to us, flying past us. Then the cowling just exploded and came apart. We spun out of control, but we came to a stop and we were still alive, so we just laughed. It was all we could do at that point.” At this point, laughter might be the best remedy for Borofka, who’s had a rough couple of days to start the week. “Yesterday, we broke a down and couldn’t get to our spot, either,” he said. “But it was pretty exciting to watch your motor fly off your boat and explode.” 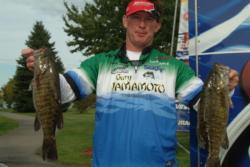 “I’m telling you, he’s got them pegged. He was throwing back 2-pounders that I would have loved to have. But you’ve got to run for them; tomorrow, he’s going to be cutting it close.”

– Co-angler Jirii Sakata, on his day of fishing with pro leader Charlie Weyer.

“If the wind is like it was today, I think I can get there and back with 10 minutes to spare tomorrow.”

– Weyer, who is making a long run downriver and locking through to catch his big sacks.

“It’s a real thrill to fish a tournament sponsored by my life.”

“I’ll tell you what, this has just put the Columbia River on the map.”

– FLW Series tournament director Chris Jones, enjoying the fruitful bounty of this smallmouth fishery on FLW Outdoors’ first visit to Washington. To further that sentiment, this tournament site is tailor-made for an event like this. It’s not just the awesome smallmouth fishery; the convenient and generous accommodations, marina and the overwhelming hospitality of the Tri-Cities area has shown that this is a tournament site nonpareil. And that’s an objective observation from someone who’s seen a lot of bass tournaments.