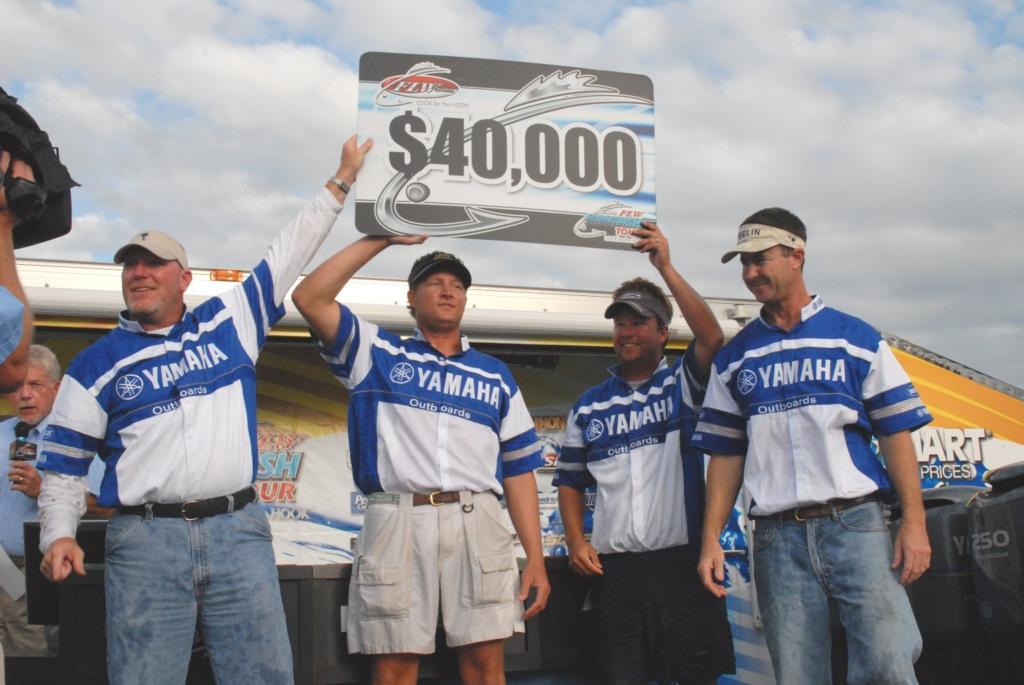 ATLANTIC BEACH, N.C. – They call themselves Team Reelin, a fitting title for a group of guys who love to reel in kingfish every chance they get.

“It’s the shock of the world, baby!” he suddenly exclaimed, as if the reality of his win had just hit home.

The word “shock” is right given Team Reelin’s remarkable trip to victory lane.

That trip actually started on day two at about 5 p.m.

“Yesterday, we had been hard on the rod all day,” Pincus recalled. “We had chummed up one area right out in front of the beaches in 35 to 40 feet of water, and we were pretty much committed to that area. And right about 5 o’clock, just minutes before we had to come in, we had a big kingfish hit a bluefish.”

This morning, with winds predicted to blow even harder than yesterday,

“We went right back to the same exact spot and started chumming again this morning,” added Pincus. “And about 8:30, we got a fish on and that was the one that won it for us.”

For the record, Team Reelin’s day-three fish weighed 28 pounds, 4 ounces, and when combined with their day-two fish, it gave them a tournament total of 64 pounds, 6 ounces, enough for the team’s first Kingfish Tour win.

The team collected $40,000 for their win, the most money the team has ever won in a kingfish tournament.

Wood chose to take his team to Drum Inlet all week, including today. After fishing out in front of the Drum for a while, big seas chased the team back inside, where they scored the second-place fish on a mullet fished on top.

“Mullet and menhaden were our baits of choice this week,” Wood said. “We fished everything on top in water 20 to 50 feet deep.”

Logan made a run back to the east, where he caught his day-one fish, but the wind just would not let them fish effectively.

“After that we just came back into the (Beaufort) inlet here,” Logan said. “I knew there were plenty of big fish close, but for some reason, they just turned off today. If I had it to do over again, I would have done the same thing.”

In the end, Logan’s Run did end up with a 14-pound, 9-ounce king today, which helped secure them in third as the other two teams failed to weigh in a fish.

The high-spirited team mounted the stage with a heavy-looking fish bag. But it was full of water balloons, which they used to give Team Reelin a victory splash.

“We had been making a pretty good run the last two days, but given the shorter day and the wind today, we decided to stay close to maximize our fishing time this morning,” said Denton. “We were in the right area, we just did not get bit … but that water balloon bash sure was fun.”

Winding up in the fifth-place position was Team McNiell, which includes

“We jumped the shoals this morning, went out to 30-minute Rock for a while and then came back into the inlet,” Phillips said. “We’ve caught good fish in that inlet all week, and today we just couldn’t get a bite in there.”

Team McNeill ended up with a $12,890 payday for their finish.

Team of the Year

With the conclusion of the fourth and final Kingfish Tour event in Atlantic Beach, the Land O’Lakes Kingfish Tour Team of the Year goes to Team Yozuri/The Fischer King, captained by Ozzie Fischer.