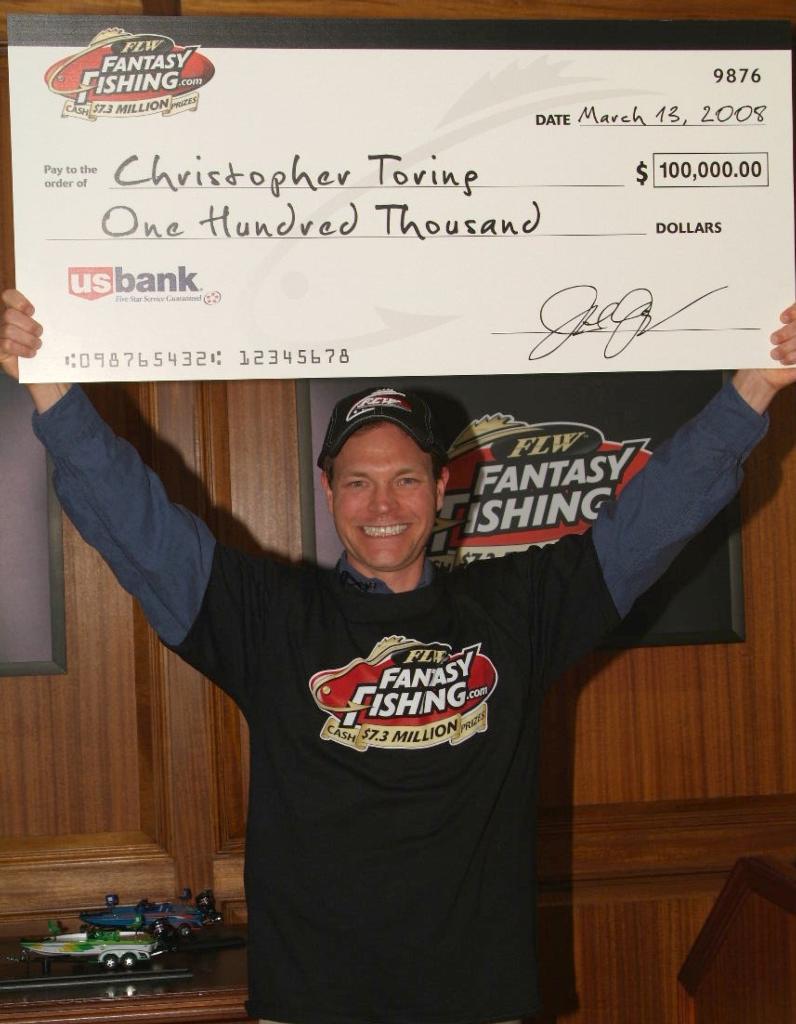 MINNEAPOLIS – Tuesday, FLW Fantasy Fishing awarded the first of seven historic fantasy-sport prizes: $100,000 to Christopher Toring of Minneapolis. With the groundbreaking announcement of FLW Fantasy Fishing and the largest fantasy sports payout ever, including $7.3 million in cash and prizes, the excitement and anticipation has kept participants and fans on the edge of their seats and eager to become a $100,000 richer – just by playing FLW Fantasy Fishing.

An admitted newcomer to professional bass fishing, Toring was shocked to find out he reeled in the inaugural $100,000 first prize awarded in conjunction with his fantasy team’s performance at the prestigious Lake Toho Tournament, the first stop on the 2008 Wal-Mart FLW Tour.

Toring’s team of 10 professional anglers accumulated 5,212 points over the four-day tournament, edging out the second-place finisher, Wesley Story of Clarks Hill, S.C., by less than 150 points. In total, 585 players came away as winners taking home prizes from top brands like Wal-Mart, BP, Kellogg’s, US Bank and Land O’ Lakes.

Story, an amateur tournament angler and a fan of the Wal-Mart FLW Tour was very excited at his second-place finish, which netted him a $5,000 Wal-Mart gift card. “My Player’s Advantage membership was a big factor in winning the $5,000 Wal-Mart gift card. That’s an incredible payback on my $39.95 membership fee,” the runner-up said. “FLW Fantasy Fishing and Player’s Advantage makes following the Wal-Mart FLW Tour even more fun for me, especially being able to watch live weigh-ins each day as part of my membership.”

“What a great start to the FLW Fantasy Fishing season; the response and reaction to this game has been phenomenal,” said Irwin Jacobs, chairman of FLW Outdoors, creators of FLW Fantasy Fishing. “Offering over $7.3 million in cash and prizes is an amazing milestone in fantasy sports; we can’t wait to award the next $100,000 prize for our tournament in Birmingham, Ala., starting April 3.”

Over 4,000 prizes totaling as much as $7.3 million will be awarded during the course of the FLW Fantasy Fishing season. In addition to millions in cash, other prizes like Ranger Boats; a Chevy Silverado; Yamaha and BRP ATVs and personal watercrafts; hundreds of thousands of dollars in Wal-Mart gift cards; tens of thousands of dollars of free BP gasoline and more will be awarded to the players with the highest point totals earned based on the placement of their team of 10 professional anglers for each tournament.

Double and triple points are awarded during major tournaments that take place as the season progresses – creating the potential for a very wide open and exciting finish.

“The million dollar grand prize is still up for grabs; in fact, our champion may still have yet to sign up,” said Jacobs. “Just like in tournament fishing, all it takes is one big catch to vault into the lead.”

View Video of the Check Presentation.